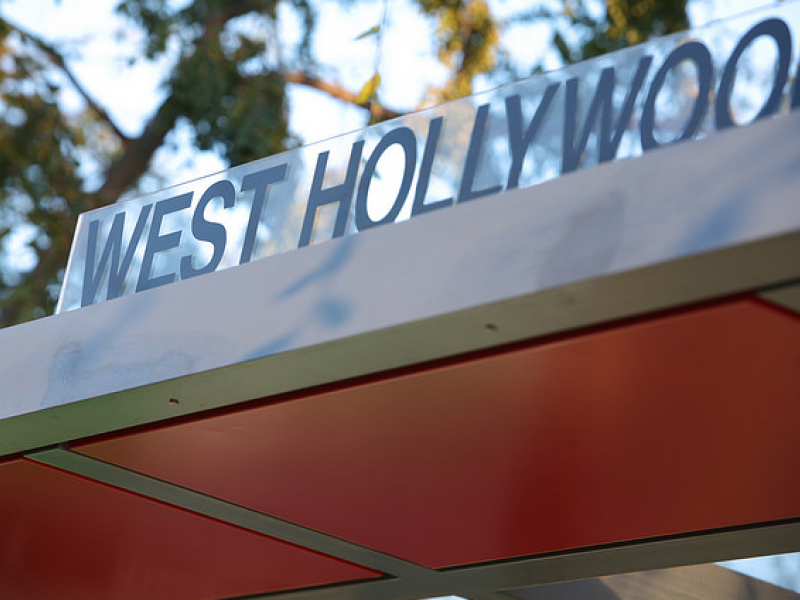 BY TROY MASTERS  |  In a first in the nation move, West Hollywood Mayor Lauren Meister is taking aim at the President of the United States.  She hopes her city will sever business ties with with any company or fund associated with Donald Trump or his trusts.

Meister’s proposal will be presented at a city council meeting scheduled tonight. Her item, 5A, reads as follows:

CALL FOR WEST HOLLYWOOD TO PROHIBIT DOING BUSINESS WITH BUSINESSES PROVIDING FINANCIAL OR OTHER BENEFITS TO THE PRESIDENT OF THE UNITED STATES  [L. MEISTER, A. LOVANO]:

The President of the United States continues to take actions that contradict the core values of West Hollywood, refuses to release his taxes, and continues to benefit from business interests, thereby potentially violating the Emoluments Clause. The City Council will consider prohibiting the City of West Hollywood from providing financial or public benefit to any person holding the office of President of the United States or any entity in which the President or his revocable trust holds investments, particularly, any financial institution, hotel, real estate company, investor or direct affiliate. The City Council will also consider re-evaluating its relationship with Wells Fargo based on the financial institution’s connection to the President and the Dakota Access Pipeline.

RECOMMENDATIONS: 1) Direct the Finance & Technology Services Department to compile a list of financial institutions, hotels, real estate-related companies, investors, and direct affiliates, in which the President of the United States or his revocable trust has a financial stake; 2) Prohibit the City from doing business with or otherwise providing financial or other benefits to aforementioned entities; 3) Adopt Resolution No.____ “A RESOLUTION OF THE CITY COUNCIL OF THE CITY OF WEST HOLLYWOOD PROHIBITING THE CITY FROM PROVIDING FINANCIAL OR OTHER PUBLIC BENEFITS TO THE PRESIDENT OF THE UNITED STATES OR HIS REVOCABLE TRUST;” 4) Direct staff to send signed copies of the adopted resolution to the offices of President Donald Trump, U.S. Senators Dianne Feinstein and Kamala Harris, U.S. Representative Adam Schiff, and other partners as appropriate; and 5) Direct staff to re-evaluate the City’s relationship with Wells Fargo based on the financial institution’s business dealings with the President of the United States and its partial financing of the Dakota Access Pipeline.

The move is inspired by numerous actions from around the nation in which city’s and state’s are prevented from using state funds to travel to states that do not permit legal protections for LGBT people.

California has banned state-funded and state-sponsored travel to North Carolina, Mississippi, Tennessee, and Kansas.  And a push back has already started, as some student athletes are unable to compete in important events.

It’s the city’s attempt at “putting its money where its mouth is,” she recently told WeHoville.com.

The item also provides a further list of reasons why such an unprecedented action should be taken:

“The following are executive orders the President has signed in his first few weeks in office directly in opposition to the core values of the City of West Hollywood:

• Directing the review of the Dodd-Frank financial regulations and halting implementation of another federal rule that mandates financial advisers to act in the best interests of their clients.

• Taking steps to begin to plan, design, and construct a border wall, begin a comprehensive list of criminal actions “committed by aliens”, and threatening to cut off federal funds from sanctuary cities.

• Ordering the fast tracking of the construction on the Keystone XL Pipeline and the Dakota Access Pipeline.

“CIM Group, a real estate investor with several projects in West Hollywood, was a lender to the developers of the Trump SOHO hotel and condominiums in New York and took ownership of the hotel in 2014. However, Trump Management continues to operate the hotel.

“The 8899 Beverly Boulevard project is a joint venture between Townscape Partners and real estate investor Angelo, Gordon & Co. Donald Trump has invested between $2 and $10 million dollars in Angelo, Gordon hedge funds according to Trump’s Statements of Economic Interest.

“While the City may not be able to prohibit real estate developers with ties to the President from buying/owning property in the City or developing “by-right” projects that fall within the City’s zoning code, the City Council, with this item, can prohibit the City from negotiating development agreements or providing private benefits in exchange for public benefits, both of which are discretionary actions.”

In another item, Meister is also asking the council to consider a similar ban on business dealings with Wells Fargo because of its investment in the Dakota Access Pipeline.

After a tense debate, the council agreed to develop a list of businesses to which Trump has ties and to explore development of a policy that would bar the city from doing business with such entities. But the idea that seemed to draw the most support was a recommendation to view the request as a way to devise socially conscious money strategies in selecting city vendors and business partners.

Such an idea seemed to skirt around questions raised about the City’s decades long relationship with Wells Fargo.

Wells Fargo, says Meister, is not only connected to Trump but is also a financing partner the Dakota Pipeline.

Other California cities, most notably Santa Monica and Davis have severed their relationship with Wells Fargo because of an estimated investment of $120 million in the pipeline.

Genevieve Morrill, CEO of the West Hollywood Chamber of Commerce, was outraged.  Wells Fargo, she posited, is one of 15 financial institutions involved in the Dakota Pipeline. “They didn’t make this decision politically, they made it financially,” Morrill said of Wells Fargo. “This isn’t hurting Trump. This is simply stating our intolerance in a way that has unintended consequences.”

Jonathan Weedman, the newly appointed executive director of the Gay Men’s Chorus who was until recently headed the Wells Fargo Foundation, a foundation that supports the Chorus, said “there is no company more progressive than Wells Fargo.”

Though Wells Fargo has long been supportive of LGBT and HIV causes, the bank was recently involved in a global scandal that has tarnished its reputation. The bank was fined $185 million dollars after it was revealed employees had opened more than 1.5 million secondary accounts without customer permission and charged them fees.

Councilmember John Duran became quite tempestuous in defending Wells Fargo involvement in the Dakota pipeline and attempted to deflect criticism by saying the Native American Standing Rock tribe does not permit same sex marriage among its members.  He hailed Wells Fargo’s investment in West Hollywood Community Housing Corporation and its long history of support for local and national LGBT organizations.

Councilman D’Amico, clearing miffed at Duran’s disparagement of the Native American tribe, rebuffed Duran: “I am unable to verify your assertion about the Standing Rock’s tribe.”

Duran is chair of and a donor to the chorus.

An article on Wehoville.com points out that GMCLA’s website shows that “Wells Fargo has donated more than $50,000. GMCLA also is the recipient of donations from city vendors such as Athens Services and real estate developers.