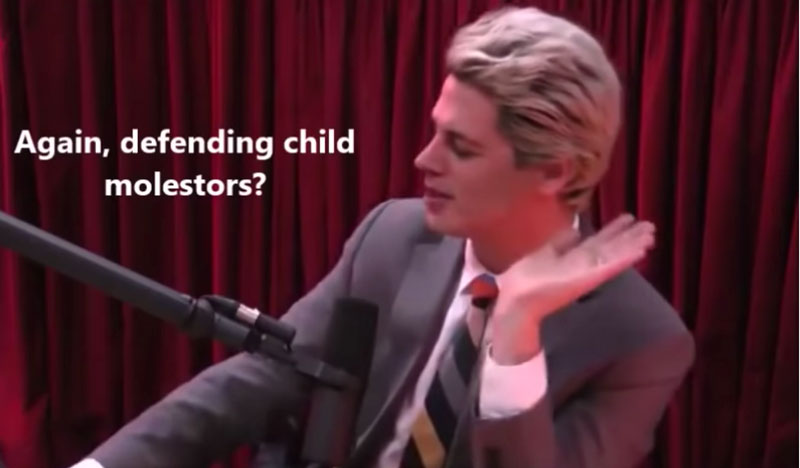 BY CHRIS JOHNSON  |  Although anti-transgender and Islamophobic views were not a problem for organizers of the Conservative Political Action Conference, an unearthed video in which Milo Yiannopoulos suggests approval for sex with underage boys is apparently a bridge too far.

Matt Schlapp, chair of the American Conservative Union, announced Monday in a statement Yiannopoulos would be disinvited from the annual conservative confab over the video amid outcry from both conservatives and progressives over giving him a prominent role as a keynote speaker.

“Due to the revelation of an offensive video in the past 24 hours condoning pedophilia, the American Conservative Union has decided to rescind the invitation of Milo Yiannopoulos to speak at the Conservative Political Action Conference,” Schlapp said.

As Schlapp noted, Yiannopoulos responded on Facebook to consternation over the video and denied he supports pedophilia, maintaining the video was “selectively edited” and he has denounced pedophilia in other capacities.

But the response, Schlapp said, is “insufficient.”

“It is up to him to answer the tough questions and we urge him to immediately further address these disturbing comments.”

CPAC had announced late last week Yiannopoulos would be the keynote speaker at CPAC after he appeared on HBO’s “Real Time with Bill Maher” and reiterated his view — one with which Maher agreed — that transgender people are “sexually confused” and shouldn’t be allowed in the bathroom consistent with their gender identity.

Yiannopoulos also made denigrating comments about gay people, saying he wouldn’t hire them as workers because they’re constantly late and on drugs and they “have a long road” to coming to terms with their sexual orientation.

It was the latest in a history of anti-LGBT comments from Yiannopoulos, who’s gay and claims to have a black boyfriend.

The appearance on “Real Time” and announcement Yiannopoulos would speak at CPAC came to the dismay of LGBT rights supporters, who asserted anyone who expresses those views shouldn’t be granted a prominent platform.

The videos suggesting Yiannopoulos is OK with pedophilia were unearthed not by progressive activists, but by the Reagan Battalion, a conservative blog that objected to Yiannopoulos’ appearance at the event.

Yiannopoulos, a senior editor at the conservative website Brietbart, was a Trump supporter during the Republican primary. During the Republican National Convention, Yiannopoulos appeared at an “LGBT for Trump” event and spoke in front of posters of scantily clad slender young men dressed as Trump supporters. The images were photos taken by Lucian Wintrich, the founder of “Twinks4Trump.”

“This sort of arbitrary and oppressive idea of consent, which totally destroys the understanding that many of us have,” Yiannopoulos says in one clip. “The complexities and subtleties and complicated nature of many relationships. You know, people are messy and complex. In the homosexual world particularly. Some of those relationships between younger boys and older men, the sort of coming of age relationships, the relationships in which those older men help those young boys to discover who they are, and give them security and safety and provide them with love and a reliable and sort of a rock where they can’t speak to their parents.”

The annual conservative convention in D.C. has featured President Donald Trump and Vice President Mike Pence and they are scheduled again this year to speak. CPAC has a history of barring from co-sponsoring the event gay Republican groups, such as the now defunct GOProud, although that policy seems to have changed because Log Cabin Republicans this year will have a booth at the event for the second year in a row.

Schlapp said he initially invited Yiannopoulos as a statement in support of free speech. Earlier this month, Yiannopoulos was forced to cancel an appearance at the University of California, Berkeley, after a protest that erupted in violence.

“We initially extended the invitation knowing that the free speech issue on college campuses is a battlefield where we need brave, conservative standard-bearers,” Schlapp said.

“We give great thought to who is invited to speak, but the CPAC platform is not an endorsement of everything a speaker says or does,” Schlapp said. “We continue to believe that CPAC is a constructive forum for controversies and disagreements among conservatives, however there is no disagreement among our attendees on the evils of sexual abuse of children.”