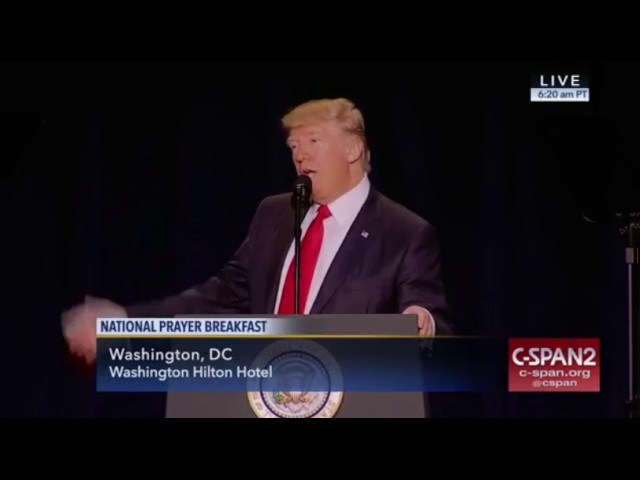 The National Prayer Breakfast was held in Washington, D.C. on Thursday amid reports of an executive order President Donald Trump might be readying to sign which would allow for discrimination against the LGBTQ community.

After the story broke on LGBTQ Nation, Press Secretary Sean Spicer was asked at a White House press conference if there was any truth to the reports, to which he declined to answer. The White House later said through a spokesperson to NBC News that an executive order allowing for “religious freedom” style discrimination wasn’t “the plan at this time.”

They put out a statement saying they would not overturn the executive order signed by former president Barack Obama protecting federal employees, and those working for federal contractors, from discrimination based on sexual orientation or gender identity. However, this left open the possibility for a new executive order that would carve out a religious exemption to that law.

When text from a rumored draft of the order was published by The Nation on Wednesday, White House officials told ABC News the draft appears to be among the hundreds of executive orders that are circulating and that they were drafted by either the Trump transition team, the White House policy team or possibly even by outside groups. They added that they do not all reflect the administration’s thinking or likely policy.

One official would not say who drafted the potential order published by The Nation, but did not dispute its authenticity.

“We do not have plans to sign anything at this time but will let you know when we have any updates,” said Sarah Huckabee Sanders, a White House spokesperson.

Sanders also told BuzzFeed News, “We still do not have any plans to take action on this topic at this time” when asked about a possible executive order limiting LGBTQ rights.

Meanwhile, there are also concerns about the First Amendment Defense Act, or FADA, which would similarly allow for discrimination in areas such as employment, housing, private business, and healthcare, provided the person refusing to offer goods and services can cite a religious conviction as their motivation for so doing. Trump has promised to sign it if it passes Congress, which is set to introduce it.

When President Trump took the podium, following a host of religious speakers, he pledged to protect “religious freedom,” making the statement repeatedly throughout his speech.

Freedom of religion is a sacred right,” Trump said. “But it is also a right under threat all around us, and the world is under serious, serious threat, in so many different ways. And I’ve never seen it so much and so openly as since I took the position of president.”

He then pledged to take action.

“My administration will do everything in its power to defend and protect religious freedom,” he said.

Trump touched on the temporary travel ban on seven Muslim majority countries, claiming it was necessary for the safety and security of the American people.

“In recent days, we have begun to take necessary action to achieve [the goal of keeping the country safe]. Our nation has the most generous immigration system in the world. But these are those and there are those that would exploit that generosity to undermine the values that we hold so dear. We need security,” Trump added.

“There are people who would seek to enter our country with the purpose of spreading violence or oppressing other people based upon their faith or their lifestyle. Not right,” he said.

He said we need to “help ensure that those admitted into our country fully embrace our values of religious and personal liberty, and that they reject any form of oppression and discrimination.”

Trump also once again, like he did when introducing his running partner Mike Pence, during his convention speech, and during a speech to religious leaders in Orlando, promised to do away with the Johnson Amendment, which prevents religious organizations from helping or hurting political parties or candidates.

“It was the great Thomas Jefferson who said, ‘The God who gave us life, gave us liberty.’ Jefferson asked, ‘Can the liberties of a nation be secure when we have removed a conviction that these liberties are the gift of God?’ Among those freedoms is the right to worship according to our own beliefs. That is why I will get rid of and totally destroy the Johnson Amendment and allow our representatives of faith to speak freely and without fear of retribution,” Trump said.

He said at the beginning of his talk that he hopes to return “seven more times with you.”

You can watch Trump’s full remarks at The National Prayer Breakfast below.