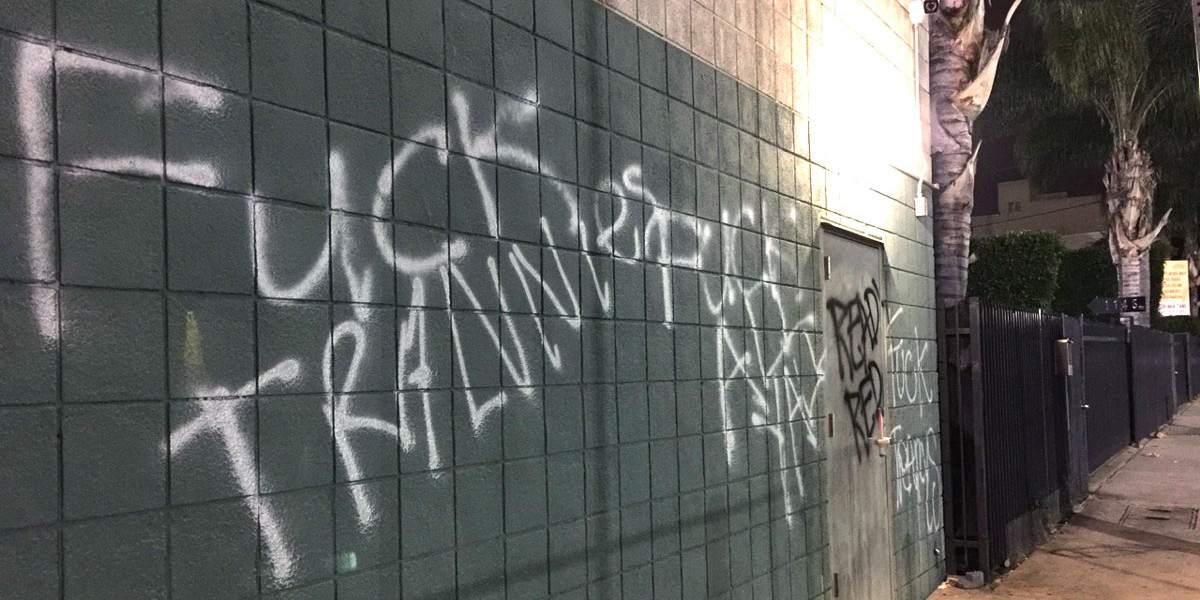 According to Vanguard Now, when employees and volunteers of the Center arrived for work on the morning of February 10 “they found anti-LGBT slurs spray-painted across the entire side of one wall of a Center facility in Hollywood.” The graffiti was found on an outer wall of The Village at Ed Gould Plaza, near Santa Monica Blvd. and Highland Ave.

“It happened sometime between 9 and 10 pm last night,” said Jackie DeFede, Director of Facilities at the Center. “We had a security officer on duty, but he was patrolling other areas of the building. Fortunately, we have cameras that should have recorded the perpetrators.”

Vanguard Now reported that DeFede “will be filing a police report and sharing video footage with the investigators.”

A public information officer at the Los Angeles Police Department’s Hollywood Station confirmed that a report had been filed late in the day on Friday but no action has yet been taken by police.

It is, according to the Center, the worst case of vandalism targeting its facility in recent history. The graffiti was removed hours after it was found.

In ordinary times such an act of vandalism would quickly trigger action by the Federal Bureau of Investigation’s Civil Rights Division, an investigative branch of that agency tasked with unraveling such incidences.

A lesbian retired police officer, who requested anonymity, said her impression of the image above is that the person who did it is likely familiar.  She pointed to use of ‘yall’ as an indication that the person “has a personal grudge against the Center.”

The Southern Poverty Law Center counted 867 cases of hateful harassment or intimidation in the United States in the 10 days after the November 8 election. While this does not appear to be animated by hostile Trump forces, it nonetheless occurs in an environment where many of us fear violence and are especially vigilant.

Such incidents — mild and severe — are spreading, the SPLC said.

“They’ve been everywhere — in schools, in places of business like Walmart, on the street,” SPLC President Richard Cohen said.

The Pride will update this article as information becomes available.