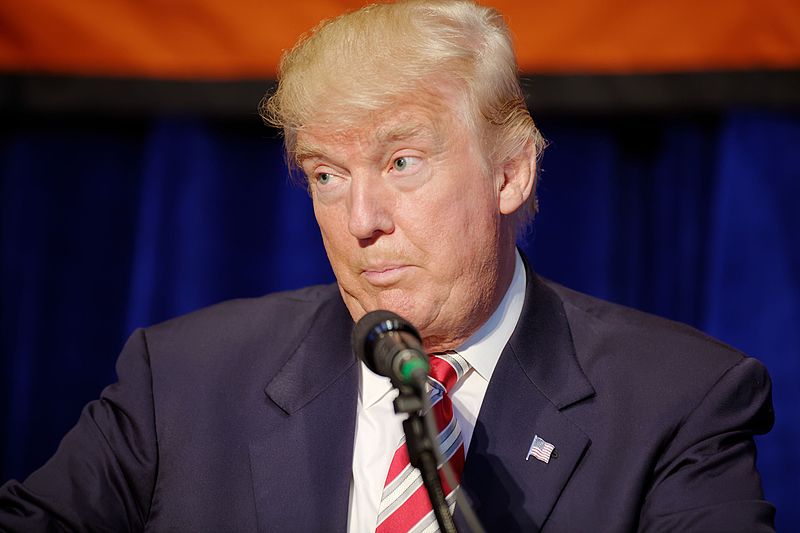 Among the frenzy of leaks out of the White House in the first 100 Days of the Trump administration was the report of a draft “religious freedom” executive order that would legalize discrimination against LGBT people. The report by highly regarded investigative reporter Sarah Posner on the draft order titled “Establishing a Government-Wide Initiative to Respect Religious Freedom” was published in the Nation on Wednesday, Feb. 1 and all hell broke loose. But, given Donald Trump’s penchant for chaos and distraction, it is not far-fetched to speculate that the draft order may be yet another twist in his disruptive con game.

In a seeming contradiction to assurances from White House press secretary Sean Spicer that executive orders from President Obama protecting LGBT workers in federal contracts would not be rescinded and that the president “continues to be respectful and supportive of LGBTQ rights,” the proposed draft order would create “wholesale exemptions for people and organizations who claim religious or moral objections to same-sex marriage, premarital sex, abortion, and trans identity,” as well as limiting women’s access to contraception and abortion, especially through the Affordable Care Act.

Posner wrote: “The four-page draft order, a copy of which is currently circulating among federal staff and advocacy organizations, construes religious organizations so broadly that it covers ‘any organization, including closely held for-profit corporations,’ and protects ‘religious freedom’ in every walk of life: ‘when providing social services, education, or healthcare; earning a living, seeking a job, or employing others; receiving government grants or contracts; or otherwise participating in the marketplace, the public square, or interfacing with Federal, State or local governments.’”

Jenny Pizer, senior counsel and law and policy director for Lambda Legal, told Posner the the order’s language constitutes “a license to discriminate with public money in a series of contexts in which people tend to be vulnerable,” such as against LGBT children in foster care, which is federally funded. More broadly, she said, organizations that receive federal funding for child welfare services could even refuse to “refer the child to another agency or setting that would be protective and affirming and instead place the child in an environment that is aggressively hostile to who that child is, on religious grounds.”
Among those furious with the possibility of the executive order was GLSEN’s Executive Director Dr. Eliza Byard.

“On Monday, Donald Trump said he would not discriminate against LGBTQ people, but today’s expected executive order would allow health and counseling professionals to deny LGBTQ youth life-saving services, and it would allow school leaders to force some students to use separate and unequal facilities and deny them equal educational opportunities. LGBTQ educators could lose their jobs because of who they are, who they love or who they married,” she said in a statement. “These are not the ideals or values our country was founded upon. We call on President Trump to live up to his promises to the LGBTQ community and protect LGBTQ youth by not broadening any religious exemptions already legally allowed to religious organizations. We are part of the American family, too.”
(See the Williams Institute read out here on how the order “could impact thousands of LGBT people, including tens of thousands of LGBT youth in foster care and same sex couples seeking to foster or adopt.)

Spicer was asked about the proposed executive order at his press briefing on Thursday. While he said there was “nothing new” on the LGBT front, he didn’t expressly deny the idea of a Trump executive order broadening the scope of “religious freedom,” citing the Hobby Lobby case, where the Supreme Court ruled that for-profit corporations cannot be forced to provide their employees contraceptives under the Affordable Care Act, if it offended their religious beliefs. The ruling was quickly interpreted to also include permitted discrimination against same sex couples. As Slate put it: “For the first time, the court has interpreted a federal statute, the Religious Freedom Restoration Act (or RFRA), as affording more protection for religion than has ever been provided under the First Amendment.”
And Trump and his evangelical base, lead by the Family Research Council and Heritage Action, seem to be interested in expanding even that broad interpertaiton.

“I think there are several businesses and several institutions – Catholic Institutions and others – that have been mandated or attempted to mandate certain things that they may or may not do or how they have to treat their employees,” Spicer said. “Those are instances where clearly the pendulum is swinging a different way where you are not carving out institutions or the ability for privately held businesses to conduct themselves to live according to their faith or their moral compass. And so there’s clearly a lot of evidence in the last couple of years of the government coming in with regulations and policies that have frankly denied people the ability to live according to their faith.”

“From the president’s point of view, that’s discriminatory itself?” asked the CBS News reporter.

“I think it’s a pendulum and where the president is – is that he wants to make sure that you don’t penalize someone for wanting to express their faith. And that to the extent that we can keep that line a little less blurred and allow people who don’t believe in a faith or have their opposing faith – make sure they are equally comfortable in the workplace. But we shouldn’t penalize people or mandate them to abide by certain policies or regulations, which are in direct contradiction to their faith.”

To which Lambda’s Pizer succinctly responded in Posner’s story: “[B]eing denied the ability to discriminate against others is not discrimination against you.”

But here’s the catch to the outrage generated by the possibility of the religious freedom executive order: Trump doesn’t need it. On the campaign trail and in his first weeks in office, including at Thursday’s Prayer Breakfast, Trump promised his evangelical base that he will sign the First Amendment Defense Act, that Republican Rep. Raul Labrador announced he would re-introduce this year. Labrador’s FADA: “Prohibits the federal government from taking discriminatory action against a person on the basis that such person believes or acts in accordance with a religious belief or moral conviction that: (1) marriage is or should be recognized as the union of one man and one woman, or (2) sexual relations are properly reserved to such a marriage.” So theoretically, a pharmacist could refuse to give HIV medications to a married gay man.

Utah Republican Sen. Mike Lee intends to re-introduce a similar bill, and other bills enabling religious people to discriminate against LGBT and HIV-positive people area also expected to pop up in the Tea Party/Republican-controlled Congress.

At Thursday’s Prayer Breakfast, Trump reiterated his other major promise to the evangelicals: “I will get rid of and totally destroy the Johnson Amendment.” This is the rule that “bans all tax-exempt nonprofits — which includes churches and other houses of worship, as well as charities — from ‘directly or indirectly’ participating in any political candidate’s campaign, as described by the Washington Post.

Essentially, this prevents churches and their religious coalitions from becoming SuperPACS for candidates. As LGBT Californians know to well after the battle over Prop 8, such religious coalitions have no such restrictions over funding, endorsing or opposing issues such as marriage equality.

But, Thursday afternoon, as if to cement his eradication of civility in the name of rooting out “political correctness,” Reuters is reporting that the Trump administration wants to revamp and rename the government’s “Countering Violent Extremism” program so it focuses solely on Islamist extremism and “would no longer target groups such as white supremacists who have also carried out bombings and shootings in the United States.”

“Some Republicans in Congress have long assailed the program as politically correct and ineffective, asserting that singling out and using the term ‘radical Islam’ as the trigger for many violent attacks would help focus deterrence efforts,” Reuters reported, noting also that Muslim groups were concerned that such a refocus would target one particular faith group and put it under suspicion.

But, given Trump’s distaste for political correctness, would this program change to ignore hate speech by white supremacists and others also lead to the questioning of the federal definition and enforcement of hate crime laws?

With all these other possible anti-LGBT actions on the horizon, Trump doesn’t need to sign an anti-LGBT executive order. It’s a con job so he can spin that he is a friend of gays because he didn’t agree with the floating idea of the anti-LGBT executive order – while also spinning that he’s just keeping his campaign promises as he signs bills designed to devastate LGBT rights. Spin is in.

There is an LGBT+ Against Trump rally at the Matthew Shepard Human Rights Triangle (Crescent Heights and Santa Monica Blvd) in West Hollywood Thursday night from 6:00p-8:00. After the gathering, there will be a march to WeHo Park for speeches about LGBT, women, Muslim and Jewish rights, immigration, and other issues.

There will also be discussion about Next Steps! What can YOU do? Including, per Robert Gamboa:
1. Call your friends and family in other states talk to them about these concerns, fears and convince them to talk to their legislators.
2. Make donations to organizations that can fight these battles. (Dare I list any?)
3. Continue to speak up, have peaceful rallies, forums! NEVER BE SILENT
4. Protect Each Other. Now more than ever.
5. Build Each Other Up. If we are divided, they win.
6. Educate Yourself. Facts and Accurate Data are always a solid defense.
7. Demand Better! You are better! No one shall rest until we are all equal, afforded all the same opportunities! #TRUEEQUALITY
8. Use hashtags #TrueEquality #LGBTFightBack #TheAmericanResistance