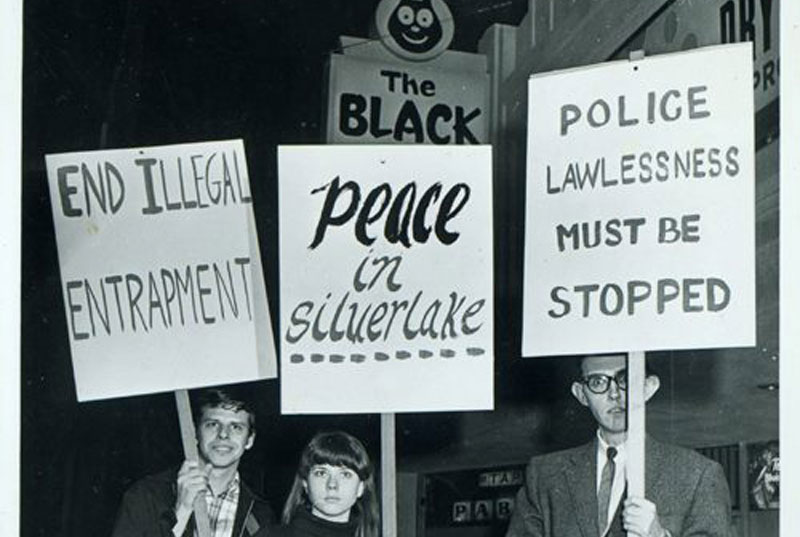 While the Cooper Donuts action preceded The Black Cat as the earliest protest in Los Angeles’ LGBT history, a civil rights protest that preceded even Stonewall in New York, activists today will mark the 50th anniversary of that demonstration with a re-enactment, rally and march.

The event will take place Saturday, February 11, 8 p.m., at The Black Cat, 3909 Sunset Boulevard, in Silver Lake. The event has a Facebook page, using hashtag #BlackCat67.

“Los Angeles and the 13th Council District have been ground zero for some of the most important events in LGBT history, especially the watershed Black Cat protests that took place right here in Silver Lake 50 years ago,” said Los Angeles City Councilmember Mitch O’Farrell, who is a sponsor. “It wasn’t that long ago that people like me were targeted by the police for being true to ourselves. Lives were ruined, and a whole class of people were marginalized. We have come a long way since 1967, but new threats loom on the horizon from the Trump Administration, threatening our civil rights and those of other traditionally persecuted communities.”

The celebration takes place exactly 50 years to the date of the original demonstration, and will include speeches from LGBT+ community members, with an eye to the past, present and the unknown future of LA’s LGBT+ community.

“As a resident of Silver Lake, I am proud of the legacy of those brave souls fighting for our rights in 1967,” said Daniel Henning, one of the organizers of the event. “Most people don’t know that the first LGBT demonstration in the U.S. was here – in Silver Lake. It’s an important story to tell the next generation so they can make sure the rights we fought for so strongly continue into the future.”

“After arresting several patrons for kissing as they celebrated the occasion,[7] the undercover police officers began beating several of the patrons[8] and ultimately arrested fourteen patrons for “assault and public lewdness.”[9]

The police used deliberate and excessive force during the raid to carry out explicitly homophobic state legislation that prevented queer folks from (1) kissing and/or engaging in any sexual acts, and (2) wearing clothing that did not match their socially prescribed gender role. For example, one of the patrons was aggressively beaten in the head by a cop wielding a pool cue.

This created a riot in the immediate area that expanded to include the bar across Sanborn Avenue called New Faces, where officers knocked down the owner, a woman, and beat two bartenders unconscious.[10] Several days later, this police action incited a civil demonstration of 300-600 attendees to protest the raids on February 11, 1967. The demonstration was organized by a group called PRIDE (Personal Rights in Defense and Education) – founded by Steve Ginsberg – and the SCCRH (Southern California Council on Religion and Homophile).[9] The protest was met by squadrons of armed policemen.[5]

Two of the men arrested for kissing were later convicted under California Penal Code Section 647 and registered as sex offenders.[9] The men appealed, asserting their right of equal protection under the law, but the U.S. Supreme Court did not accept their case.[3] However, there were fundraising efforts that reached New York and San Francisco for the six convicted patrons – including Benny Baker and Charles Talley.

In addition, it was from this event that the publication The Advocate began as a newspaper for PRIDE (Personal Rights in Defense and Education).[11] Together the raid on the Black Cat Tavern and later the raid on The Patch in August 1968 inspired the formation of the Metropolitan Community Church (led by Pastor Troy Perry).[12][13]

Performances are expected by Celebration Theatre and Gay Theatre Activist/Icon Michael Kearns, and will include a dance party in the parking lot.

“We feel it is our role being at the center of the physical location, to keep this story alive,” said Lindsay Kennedy, one of the owners of modern-day Black Cat restaurant. “It is our obligation to the community to be caretakers of that history. To us, gay rights are human rights.”

According to historians and published reports, shortly after midnight on January 1, 1967, bar patrons of The Black Cat Tavern rang in the new year with a kiss.  Also in attendance that evening were undercover officers with the Los Angeles Police Department (LAPD), who ended the night with violence and 14 arrests, including six who were charged with lewd conduct because of that kissing.

The raid helped fuel a burgeoning Gay Rights movement in the USA: several weeks later, on February 11, hundreds of demonstrators took to the streets in Silver Lake and demanded the LAPD change its policy towards gay people.

“Fifty years have passed since that first PRIDE demonstration on February 11, 1967,”  said Alexei Romanoff, one of the organizers of the 1967 protest. “We, the American LGBTQ community, have made tremendous progress since then, but our struggle for full acceptance continues.  Nothing is more appropriate for this special occasion than to revisit the site, learn what happened and why, and join in rededicating ourselves to finish the work we began so many years ago.”

Unfortunately, this type of behavior from law enforcement was not uncommon in gay enclaves in 1960s Gay America. While the Black Cat protest did not change how law enforcement treated the community, it did however serve as a launching pad for the LGBTQ civil rights movement in the United States.  The event also sparked the rise of The Advocate, one of the first LGBT-publications in the country.

In 2013, Councilmember Mitch O’Farrell joined some of the original demonstrators to dedicate The Black Cat as an historic landmark and unveiled a plaque outside of the building to recognize the landmark achievement, which helped lead to the dawn of the gay civil rights movement.

Gerard Koskovich, a well-known LGBT+ historian and archivist, wrote on Facebook that it is “quite disappointing to see organizers make the erroneous claim that the Black Cat demonstration was the ‘first LGBTQ protest’ in the U.S.”

The Black Cat demonstration is indeed historically significant as one of a series of early LGBTQ protests before Stonewall, but it wasn’t the first in U.S. history — and wasn’t even the first in Los Angeles. Just a few earlier examples:

• Homophile activists picketed in front of the White House in April, May and October 1965.

• Homophile organizers picketed in front of Independence Hall in Philadelphia annually on the Fourth of July starting in 1965 and continuing through 1969.

“We best honor the LGBTQ past and our LGBTQ pioneers when we recognize the historical record. The celebration of the anniversary of the Black Cat protest will serve this purpose only if it properly identifies the event as ‘one of the earliest protests,’ but not as the first,” he wrote.