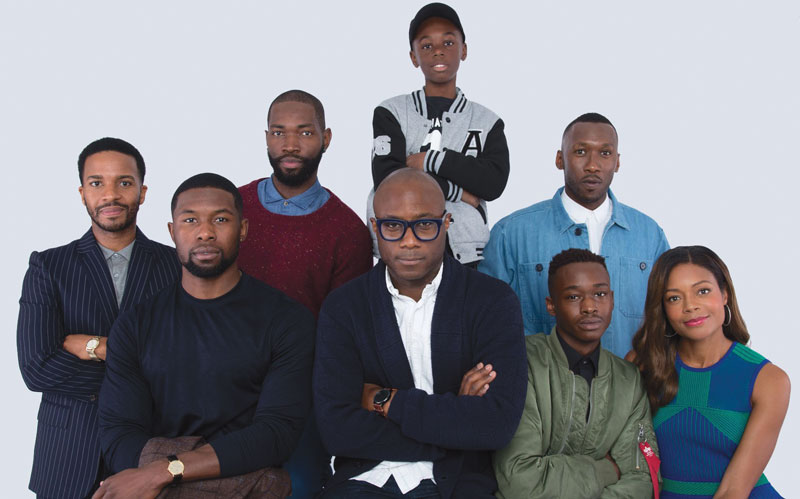 Black- and LGBTQ-themed indie masterpiece Moonlight surprised many industry insiders on Tuesday by picking up 8 Academy Award nominations, tying Arrival, and being surpassed only by the 14 of hometown Hollywood favorite La La Land. The announcement puts Moonlight‘s Barry Jenkins in the Oscar history books—he’s now the first black Best Director nominee to also be nominated for Best Picture and Best Screenplay. The powerful and beautiful film, about a black gay youth growing up in Miami’s impoverished Liberty City neighborhood, is based on a semi-autobiographical play by acclaimed writer Terell Alvin McCraney. On Thursday, Moonlight also swept the Dorian Awards, bestowed annually by the Gay and Lesbian Entertainment Critics Association (GALECA), winning five trophies including both Film of the Year and LGBTQ Film of the Year (see sidebar).

We spoke with film reporter Tre’vell Anderson, who covers queer and black movies for the Los Angeles Times, about Moonlight’s broad appeal, its stunning success, and what this may mean for the future of films about LGBTQ lives of color.

The Pride LA: Why do you think Moonlight was able to resonate so strongly with audiences and eventually with Academy voters?

Tre’vell Anderson: To be honest, I’m not too sure. Moonlight is quite literally a movie that very easily could’ve been a festival favorite turned Netflix property. The difference though was that Barry Jenkins, who many knew from the elite festival circuit and Medicine for Melancholy, was behind this. That surely helped elevate the story in ways that another writer-director might not be able to.

I must also say that I think the “fall” of The Birth of a Nation also contributed to Moonlight‘s rise. Considering history tells us that mainstream Hollywood often can only focus on one work from diverse communities a year, if Birth had not been nailed to the cross because of the controversy around its auteur Nate Parker, I wonder if Moonlight would be as revered as it is. Granted, I’m sure many would’ve still loved it.

That being said, Moonlight, to me, is easily the best film of the decade thus far. In addition to the fresh story that is the lived experienced of a black boy growing up in the projects of Miami grappling with his sexuality, the film is unapologetic about not centering the white gaze. In the words of Barry himself, the film welcomed people into his world and didn’t attempt to show the audience what they wanted or expected to see. It showed them a reality different from their own, and they were made to walk in the character’s shoes. He believes the audience, and now the Academy, respected that, and I’d have to agree.

Let it also be said that the technical, creative part of things—cinematography, editing, score, etc.—are also very referential of some foreign films that heighten the artistic content of the film. Everyone always loves a beautiful-looking movie.

Did it surprise you that it got so many Oscar nominations?

Tre’vell Anderson: Surprise wouldn’t be the right word. Given that the film has taken the industry by storm, I knew it would land some recognition. But seeing it actually land it was surely reassuring for me as a black, gay and gender non-conforming person in this industry.

It was a lock for director, picture and supporting actor and actress. The fact that it also nabbed editing, score and adapted screenplay noms are amazing.

Do you think Moonlight‘s success is more important for the future of black films, of gay films, or of black gay films—or do you even see it in those terms?

I think Moonlight‘s success is important for the future of film, period, regardless of the diverse identifiers anyone may want to tack on. At the core of the success of Moonlight is two men—Barry Jenkins and playwright Tarell Alvin McCraney—who wanted to tell their story, as they lived it. They were able to do that, and that alone serves as an inspiration for so many creatives who just want to finally be able to see themselves on screens large and small and are now emboldened enough, by Barry and Tarell’s example, to think and know they can do it themselves as opposed to waiting on someone else.

Still, Moonlight‘s continued success will have an impact on this industry when it comes to diverse storytelling across the board. Either it will be labeled an outlier and Hollywood will continue as usual rebooting and remixing tired, unimaginative narratives that center on white folk, or this will signal to the industry that black films, queer films and all films about and from people of diverse background not only should be made, but that they can sell. As of now though, it’s too early to tell.

Do you think it’ll be any easier for stories about LGBTQ lives of color to be made now in Hollywood?

Tre’vell Anderson: Some might say this is the pessimist in me, but I say it’s the realist in me: Stories about LGBTQ lives, particularly those of color, will continue to be few and far in between. What we know is that traditional Hollywood is slow to change and that when a film like Moonlight interrupts that pattern, it often is labeled exemplary making any other, in this case, queer film of color have to measure up to Moonlight as a determinant of its worth. That shouldn’t be the case—every queer film of color won’t be as good as Moonlight, but we deserve to have those pictures too. The studio executives and financiers have to be willing to take the gamble without necessarily hoping to nab an Oscar.

Are there any already in the works that you’re especially excited about?

Tre’vell Anderson: Oftentimes we don’t know of the LGBTQ stories before or while they’re being made, unfortunately. I am looking forward to what Cheryl Dunye, of The Watermelon Woman, is working on, an afro-futuristic trans tale set in Oakland called Black is Blue. I believe she is in the very beginning stages of that.

Any guesses about how many of Moonlight‘s eight nominations it’ll actually win? Which ones are you most sure of?

Tre’vell Anderson: This is tough as the competition is stiff. I’m going to make a hopeful guess of three. I think Mahershala is a front runner for supporting actor. Naomie won’t win because Viola. It won’t win for score, because La La Land. Cinematography and editing are a tossup. Adapted screenplay is tough, because August Wilson. That leaves directing and best pic. I’m hoping this splits like the Golden Globes, Damien takes directing and Moonlight takes best pic.

Obviously the hype is casting Moonlight vs. La La Land as the big Oscar battle this year. Any thoughts on that contrast, and the fact that La La Land, other than just being a very different film from Moonlight, also has no representation of people of color or LGBTQ people?

Tre’vell Anderson: For all thoughts about La La Land and diversity, I point to Ira Madison III’s incisive review at MTV. I will say that La La Land falls into a long line of films that Hollywood ends up loving because it is about them, and is safe. That is not to take anything away from the film and all those who are involved. But I think a win for Moonlight does more. It shakes the ground loose. It rises even more so as a possibility model. It tells the industry as a whole, and the world, that black and queer and black queer stories matter. It’s about time such a thought was actually uplifted.

Any thoughts about the #OscarsSoBlack hashtag?

Tre’vell Anderson: In the words of April Reign, the creator of the #OscarsSoWhite hashtag, film this year got more black, which is great and should be applauded. But the industry did not get more diverse, and inclusion still evades us.