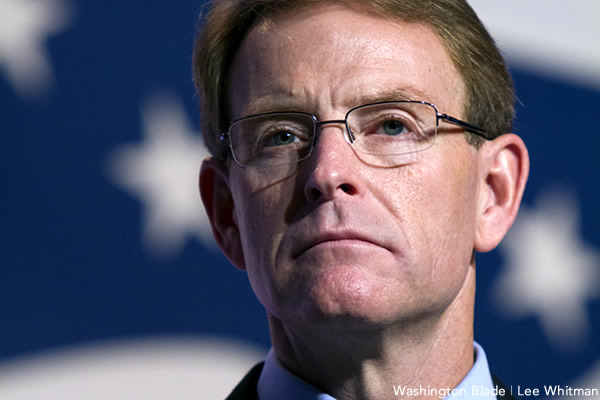 Ahead of the announcement of his Supreme Court pick and just days before the National Prayer Breakfast that Trump will attend in Minnesota on Thursday, prominent conservative leaders are increasingly certain Donald Trump will uphold “religious liberty” by imposing an executive order to ensure their ability to opt out of any LGBTQ workplace discrimination protections.

The Religious Freedom bill, now called the First Amendment Defense Act, is something Candidate Trump promised to his Christian conservative supporters. Congress is expected to pass the First Amendment Defense Act, or FADA, this congressional term. Rep. Raul Labrador, R-Idaho, and Sen. Mike Lee, R-Utah, have stated they plan to reintroduce the bill this year. It was originally introduced in 2015 but failed after critics pointed out its potential to codify discrimination against LGBTQ people and others.

Just yesterday, Trump let stand an existing Executive Order from President Obama that protects LGBTQ federal workers and employees of contractors who do business with the government.  FADA is seen as an end-run to that Executive Order.

Tony Perkins was quoted by CNBC:  “I think this is going to be addressed,” said the president of the Family Research Council.

Christian Conservatives feel they need the bill because religiously oriented workplaces, they insist, should be allowed to consider a person’s sexual orientation when doing business.

Neil Gorsuch, Trump’s choice to fill the Supreme Court seat of Justice Antonin Scalia is a proponent of the aims of the bill and supported the notorious Hobby Lobby case that propelled the discussion nationally.

Many in Washington had expected an an executive order concerning gay rights would be part the White House’s earliest actions.  “The executive order signed in 2014, which protects employees from anti-LGBTQ workplace discrimination while working for federal contractors, will remain intact at the direction of President Donald J. Trump,” a White House statement said.

Conservatives feel that statement does not preclude a supplemental executive order exempting religious organizations from, as Perkins put it, “having to change their views on human sexuality and marriage” while holding contracts with the federal government.

Perkins told CNBC that while he hasn’t “gotten complete clarity,” he said, “I have every confidence” that Trump will be guided by Republican Rep. Steve Russell of Oklahoma to exempt “any religious corporation, religious association, religious education institution or religious society” with a federal contract from the pro-LGBT Executive Order.

Winnie Stachelberg of the liberal Center for American Progress said she continues to anticipate an executive order mirroring Russell’s proposal, which she said could grant some taxpayer-funded adoption agencies the right to refuse placing children with same-sex couples. “This would be a severe blow to the LGBT community,” Ms. Stachelberg said. “A license to discriminate … and a step backward.”

Chad Griffin, president of the Human Rights Campaign, is certain the administration “is still considering an (executive order) that would discriminate against LGBTQ people.” He said in a statement that preserving Obama’s 2014 executive order was “a rather low bar,” placing focus instead on the “LGBTQ refugees, immigrants, Muslims, and women [who] are scared today.”

Ditto the National Center for Transgender Equality, whose president Mara Keisling said in a statement that Trump “is certainly not an ally to transgender refugees, transgender Muslims, or transgender people who depend on the Affordable Care Act or Planned Parenthood.”

And in reference to Trump’s supposed support for LGBT rights, Esseks repeated the axiom: “Actions speak louder than words”