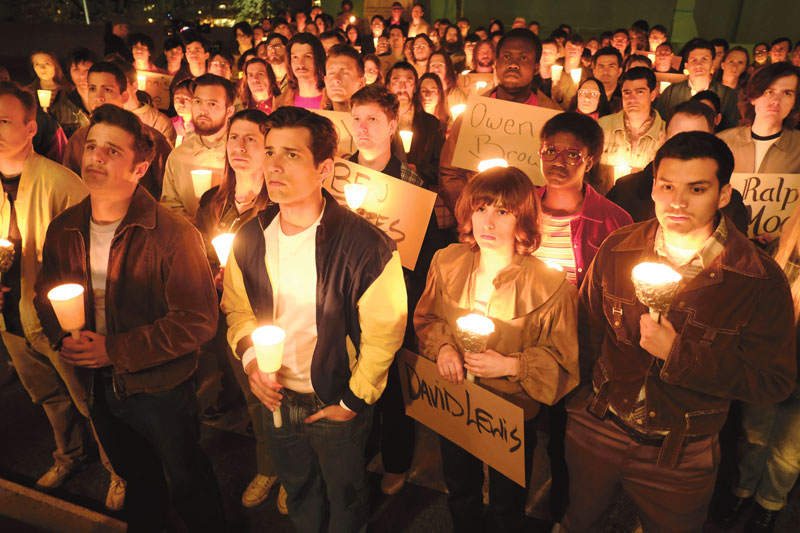 BY DAN ALLEN  |  The eagerly anticipated ABC miniseries When We Rise will have its North American premiere at the 2017 Palm Springs International Film Festival, which opens next Thursday (January 5) in the desert metropolis and runs through January 15.

The festival’s unique timing—at the start of every new year, just before both the Sundance Film Festival and the Academy Awards—gives it an important place on the international film calendar, and its consistently excellent roster of new global cinema—including a big selection of exciting gay titles—makes it one of Southern California’s most important annual film events.

“There’s of course a sizable gay community in Palm Springs—we’ve even had a couple of gay mayors—so there’s definitely an audience for gay films here and across Southern California.”

Highlighting the LGBTQ slate at PSIFF this year will be the North American premiere of Dustin Lance Black and Gus Van Zant’s highly anticipated When We Rise, a seven-part miniseries set to debut on ABC in February.

Chronicling the history of the LGBTQ rights movement as seen through the prism of three connected characters, the miniseries stars Guy Pearce, Mary-Louise Parker and Rachel Griffiths, and features cameos from the likes of Rosie O’Donnell and Whoopi Goldberg.

As part of its annual Gay!La evening within the festival on January 12, PSIFF will be showing the miniseries’ first extended episode, which is directed by Van Zant (who’ll be attending, along with Black, Pearce and Griffiths).

“The whole miniseries covers many decades, but each part stands on its own,” says Ansen. “The first part is largely set in San Francisco in the ‘60s, where the three main characters sort of converge from different places. Cleve Jones, who was an assistant to Harvey Milk, came from Arizona, where his father was a shrink who disapproved of his being gay.

One of the characters is a black Navy guy who’s coming back from Vietnam and encounters a fair amount of racism within the gay community—the show doesn’t shy away from a lot of stuff. The third character is a sort of initially closeted woman from Boston who gets very involved in the women’s movement, and then realizes that within the women’s movement there’s a lot of anti-gay sentiment, which of course there was. And their paths all cross in San Francisco.”

Another debut at PSIFF will be the American premiere of the stylishly quirky German film Center of My World, directed by Jacob M. Erwa. “The simplest way to describe it is a coming-of-age movie, but it’s one with many facets,” says Ansen. “The heart of it is a sort of love story between two teenage boys. The main character comes back to his family’s retreat in the forest, where he lives with his mother—a very interesting character, the mother, who’s a sort of expatriate American living in Germany, who won’t tell him who his father was. She’s had a lot of affairs. And he has a sister that he was close to who has mysteriously gotten sort of removed and detached, and there’s a lot of family secrets that come out in the course of the movie. It’s both sexy and complex.”

Starring in the movie as the young main character Phil is 19-year-old German actor Louis Hofmann, who also stars in the Danish film Land of Mine, which is currently shortlisted as a Best Foreign Language Oscar nominee.

Center of My World is one of two European coming-of-age movies at PSIFF this year—the other is Iceland’s Heartstone, directed by Guðmundur Arnar Guðmundsson. “This is a beautiful Icelandic film,” says Ansen. “It also deals with the difficulty of growing up gay in a very small-town remote environment. It’s beautifully done.”

Chile’s Rara is a coming-of-age story of a different kind, following 13-year-old Sara and her younger sister as they adjust to life with their mother and her first female partner. Also from Chile is musician Alex Anwandter’s first film, You’ll Never Be Alone, which shows the cold and uncaring social aftermath faced by the father of a savagely beaten gay teenager.

On a lighter note—though it may not seem like it at first glace—is the American film Pushing Dead, directed by Tom E. Brown. “Pushing Dead is a kind of low-key comedy set in San Francisco about a guy who’s HIV-positive and is reliant on lots of AIDS drugs. But such is the bureaucracy that when he gets a birthday check from his mom, it puts his bank account like $60 over what he’s supposed to have, so his medications are no longer covered by his insurance. That’s sort of the starting point for what is surprisingly a comedy, with a lot of interesting characters. He works with Danny Glover, who’s having problems with his wife. He lives with Robin Weigert (Concussion), who’s the sister of his ex-lover, who died. And all of this sounds heavy, but it’s done with a light touch. It has a lot of charm to it. It’s kind of a surprising unexpected comedy. And it’s about creating your own family—as we all know in the gay world, your family isn’t necessary the one who were born into.”

Also dealing with HIV—though it’s never clearly spelled out as such in the film—is the latest from Canadian director Xavier Dolan, It’s Only the End of the World. Based on a French play, it’s the story of writer Louis, who returns home from Paris to provincial France after many years away to tell his estranged and extremely dysfunctional family that he’s dying. It’s another of the nine films currently shortlisted as potential nominees for the Best Foreign Language Oscar.

Even more out there is the truly bizarre Mexican film The Untamed, from Cannes Best Director winner Amat Escalante. “The Untamed is the wildest of these movies,” says Ansen. “It’s not a gay film in the obvious sense, but has a very strong gay component, and certainly deals a lot with macho Mexican society and homophobia. There’s a character in it who’s a married macho guy who’s having an affair with his wife’s brother. But it has this whole other kind of science fiction element to it, which is also a sexual element, which is quite—once you see it, you won’t be able to forget it. There’s an alien creature who gets ‘involved’ with several of the characters. I’ll say no more. But visually it’s going to gross a lot of people out, I’m sure. It’s a very controversial movie. Not for the faint of heart.”

Another film with a less overt LGBTQ theme is Israel’s In Between, directed by Maysaloun Hamoud. “It’s the story of three Palestinian women, one of whom is a lesbian, living in Tel Aviv,” says Ansen. “It’s a first film by a very talented woman director, and has three terrific characters. It reminds me of last year’s Gay!La film, the documentary Oriented, which featured three gay Palestinian friends also living in Tel Aviv.”

The documentary lineup at this year’s PSIFF includes another Israeli film, Who’s Gonna Love Me Now?, which follows an HIV-positive former army paratrooper living in London as he returns home to Israel to reconcile with his religious family. No Dress Code Required tells the story of Mexicali, Mexico couple Víctor and Fernando, who face continued legal obstacles as they prepare for their wedding. (“It’s infuriating how difficult they make it for them,” says Ansen. “Just when they think they’re going to go forward, they keep finding more and more outrageous ways to deny them the chance to get married.”) Rounding out this year’s LGBTQ docs is Jewel’s Catch One, which reveals the fascinating and fantastic history of the Los Angeles nightclub of the same, and its amazing founder Jewel Thais-Williams—who’s expected to be in attendance at the film’s screening, as is director C. Fitz, and perhaps Sharon Stone, who frequented the club and is interviewed in the documentary.

The festival’s star-studded Awards Gala will be held especially early this year on January 2, three days before the festival’s official Opening Night, so as not to compete with the Golden Globes the following weekend. Unlike most film festivals, PSIFF’s awards honor talent not from its own current-year films, but from all movies released during the previous year—making it a keen predictor of Oscar nominations.

The 28th Palm Springs International Film Festival runs from January 5 to 15, 2017. Most films will screen more than once, at various venues around the greater Palm Springs area. Tickets are available via the festival’s website, www.psfilmfest.org/2017-ps-film-festival.