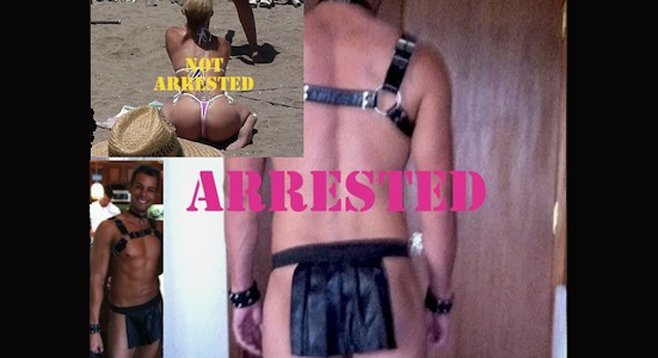 BY MATTHEW BAJKO  |  A gay San Diego resident lost his federal lawsuit against the city and several police officers after a jury determined the public officials had not discriminated against him due to the leather outfit he wore to the 2011 Pride festival.

After five days of testimony, the eight-person jury announced its verdict Tuesday afternoon (December 13). It took just two hours to deliberate its decision.

As the The Pride noted in an online story December 8, the case had drawn attention statewide as it had the potential to impact how police departments throughout California enforce nudity laws at various community events, such as LGBT pride festivals, and outdoor gatherings.

The lawsuit centered on allegations that San Diego police use different standards when enforcing the city’s rules governing public nudity depending on the venue. It stemmed from an incident five years ago where police cited Will X. Walters for violating the nudity rules while attending that summer’s Pride festival.

Walters’ attorney, Chris Morris, had argued to the federal jury that the police enforced a more restrictive policy at the LGBT event than they did at straight venues like the beach or the annual Comic-Con gathering. Deputy City Attorney Stacy Plotkin-Wolff had countered that police not only had approached other Pride attendees about their outfits but also people at the more straight-oriented events.

“The jury confirmed what we’ve always known, which is that San Diego does not discriminate in its enforcement of nudity laws,” City Attorney’s Office spokesman Gerry Braun said in a statement. “Our office would not tolerate discrimination against the LGBT community or any other group.”

Police Chief Shelley Zimmerman told the San Diego Union Tribune that she was pleased with the verdict, telling the paper that the jury “confirmed our officers acted appropriately in the way they addressed the municipal code regarding nudity at special events throughout our city.”

In a statement Wednesday in response to the B.A.R.’s request for comment, a representative for Walters said despite his legal team presenting strong evidence of discriminatory enforcement by the police, the jury was nonetheless “unmoved.”

The press release included the same comment Morris had given to the Union Tribune yesterday, in which he stated he and Walters were “extremely disappointed” with the verdict. But he also said Walters’ lawsuit, nonetheless, would have a lasting impact on the police department.

“Victories are often preceded by defeats,” Morris told the paper. “While we may have lost this battle, I can’t imagine the city will ever engage in this type of unequal enforcement of the nudity statute again in the future.”

Walters has yet to comment publicly about the jury’s decision.

The legal case had wound its way through the courts since 2012, when Walters first filed a complaint against the city, several police officers, and Pride organizers. In March 2013 San Diego Pride’s motion for dismissal was granted, and Walters amended his complaint.

In 2014, U.S. District Judge Cathy Ann Bencivengo ruled in the city’s favor, and Walters appealed to the 9th U.S. Circuit Court of Appeals. A three-judge panel on the appellate court overturned her decision this past April and sent the case back for a jury to decide if the San Diego police had violated Walters’ 14th Amendment right to equal enforcement of the law.

He had sought unspecified damages for emotional distress, as he was diagnosed with post-traumatic stress disorder following the incident. According to his lawyer, Walters has incurred $1 million in legal fees in pressing his case.

Walters, 35, attended both the 2011 Pride parade and the ticketed festival area adorned in a custom-tailored, fine-leather gladiator kilt and upper-torso leather harness outfit, which included thong underwear beneath. He had worn the same outfit, which cost him $1,000, the year prior without incident.

But while inside the gated festival area’s beer garden in 2011, Walters was approached by San Diego police Lieutenant (now Captain) David Nisleit and told his outfit was not compliant with the city’s dress code because his buttocks were visible. Walters disputed that his outfit was an issue and told the officer to either cite him or leave him alone.

Nisleit then left but returned a short while later with several other police officers and told Walters he was going to cite him for his outfit. Walters claims a female officer then grabbed him from behind and led him out of the beer garden and just outside of the festival area.

Eventually, the police told him they would cite him and he would then be free to go on his way, said Walters. But when he refused to sign the citation without being able to read it, he was arrested.