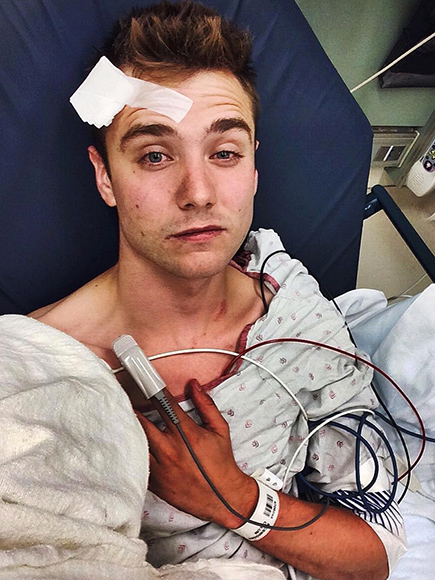 FROM CNS  |  A YouTube personality and self-proclaimed “LGBT activist,” who reported that he had been the victim of a hate crime in West Hollywood, was sentenced to three years of formal probation and ordered to complete 52 week anger management classes for vandalizing a car.

Calum McSwiggan, 26, also paid $7,000 in restitution in connection with his guilty plea Monday to a felony charge of vandalism causing more than $400 in damage, according to the Los Angeles County District Attorney’s Office.

McSwiggan admitted to damaging a car bumper and mirror on June 27. Authorities said the vandalism occurred on the same day he claimed that three men assaulted him in an anti-gay hate crime while he was in town from London.

A misdemeanor charge alleging that he made a false report about the run- in with the men was dismissed under the plea deal, the District Attorney’s Office reported. Had he gone to trial and been convicted of both counts, he could have faced up to 3 1/2 years in jail.

On his Twitter account in June, McSwiggan posted, “To reiterate, I did not fake this attack and am absolutely appalled that anyone would suggest or think that I did.”

He posted a longer explanation on his Facebook page, in which he wrote that he left The Abbey on foot with a guy he “took a liking to” and minutes later blacked out after being punched in the mouth and kicked in the body.

“I have spent my whole adult life campaigning for LGBT+ equality and did not take this attack lightly,” he wrote in his Facebook posting. “I cannot say for 100 percent that this was because I was gay but I can’t think of any other justification for this random attack. In a moment of devastation, anger and blind rage I kicked the wing mirror of the attacker’s car until it broke and then ripped it off with my hands. I also scratched the front of the car with the broken wing mirror before returning back to The Abbey for help.”

McSwiggan said deputies took him to the sheriff’s station, where he hit himself once with a pay phone across the forehead in a holding cell so he could be taken to a hospital. He said he needed six stitches for his self-inflicted injury to the head, along with three broken teeth, a cut, bruises and scrapes from being attacked.

“Just because there were no visible marks on my face does not mean I was not attacked,” he said in a Facebook post. “Being accused of being a liar and being called a disgrace to the LGBT+ community, a community I’ve dedicated my life to, is more painful than any hate crime could be.”