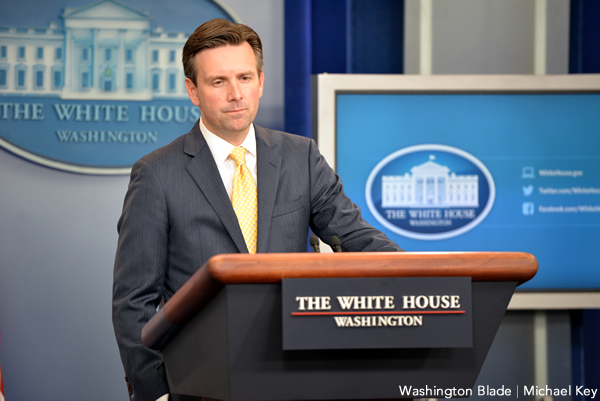 In response to a question from the Washington Blade on whether the White House could protect them, Earnest declined to speculate “about what President-elect Trump may or may not do,” but insisted President Obama undertook those actions “with a long-term perspective.”

Many fear Trump, who has pledged to undo Obama’s executive actions he thinks are unconstitutional or harmful to business, would reverse the president’s executive actions in favor of LGBT rights, such as the 2014 directive prohibiting anti-LGBT workplace discrimination among federal contractors. Trump has already said he’d rescind the Obama administration guidance barring schools from discriminating against transgender students, including by barring them from using the restroom consistent with their gender identity.

Trump also said he would appoint to the U.S. Supreme Court justices in the mold of the late U.S. Associate Justice Antonin Scalia, which could conceivably reverse the decision in favor of same-sex marriage nationwide, although such an outcome would be difficult to achieve.

Asked for President Obama’s message to LGBT people as well as other groups, such as immigrants and Muslims, who fear persecution under a Trump administration, Earnest said people who believe “passionately and strongly” about LGBT issues should continue to stand up for what they believe.

Echoing remarks President Obama made in the White House Rose Garden on Trump’s win, Earnest said “progress in our country hasn’t moved along a straight line and progress that we make in some of these areas is characterized by two steps forward and one step back.”

“Sometimes it’s characterized by delayed progress,” Earnest said. “The observation President Obama would make is the best response to that is not to lose hope, or to be cynical, or to withdraw from the public discourse. It actually calls for greater engagement. It calls for more people who passionately and strongly feel about these issues to stand up for what they believe in.”

Earnest noted the nation is committed to democratic institutions, which he said serve both the American people well and are important for our leaders to rely on because they have “served very well some of country’s greatest presidents.”

Earnest drew on remarks Hillary Clinton made Wednesday in her concession speech, saying she put it best when she said, “It’s worth fighting for what’s right.”

“I think Secretary Clinton intended that as very good advice for people who may be feeling discouraged today, and it’s understandable that people are feeling discouraged because you’re going to be disappointed when the candidate that you supported in the election doesn’t win,” Earnest said. “But even the losing candidate in this case does not think that should be used as an excuse to withdraw from the public debate and public discourse. If anything, it should serve as a motivation to become even more deeply engaged and more deeply involved and not just in a presidential election.”

In June, the Washington Blade published an article on Obama’s executive actions related to LGBT rights, as compiled by the Center for American Progress, that a President Trump could undo. Here’s the list:

∙ Final rule in May 2016 that protected LGBT people from discrimination in healthcare and insurance under the Affordable Care Act.

∙ Equal Access to Housing in HUD Programs Regardless of Sexual Orientation or Gender Identity Rule in February 2012, protecting LGBT people in all HUD­-funded programs.

∙ Comprehensive guidance in May 2016 on their interpretation of Title IX, clarifying that public schools receiving federal funding must treat transgender students in accordance with their gender identity.

∙ The Global Equality Fund, launched in 2011, which supports programs that advance the human rights LGBT persons around the world.