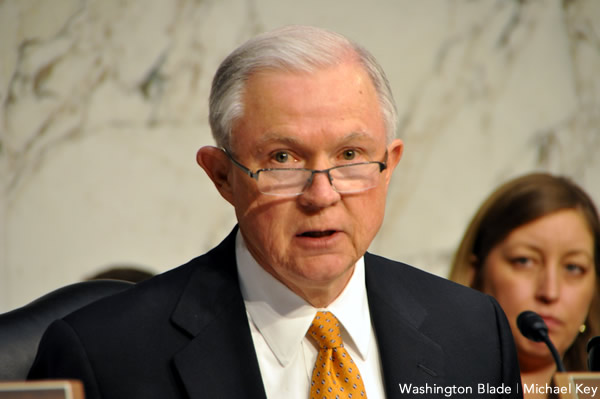 BY CHRIS JOHNSON  |  In the aftermath of Donald Trump announcing that his choice for U.S. attorney general is Sen. Jeff Sessions, much has been reported about the Alabama Republican and his hard-line stance on immigration, his history of alleged racist comments and his anti-LGBT views — but one incident reported seven years ago has gone unnoticed in media coverage.

In 2009, the Senate Judiciary Committee held a hearing on the Uniting American Families Act to draw attention to the plight of bi-national same-sex couples. The leading witness at the hearing was Shirley Tan, a Fillipino national who at the time had been with her American partner for 23 years and was raising two 12-year-old boys while under the threat of deportation.

In those days, Tan couldn’t marry her partner, Jay Mercado, in California because the recently enacted Proposition 8 barred same-sex marriage in the state. Even if the couple could marry, the Defense of Marriage Act was in place at the time and would have barred Mercado from obtaining for Tan a marriage-based green card to remain in the country. The Uniting American Families Act sought to remedy the situation by allowing gay Americans to sponsor a same-sex partner for residency in the United States.

A particularly poignant moment took place at the hearing when Tan recounted in 2009 immigration officials entering her San Francisco home and removing her.

“Immigration Custom Enforcement agents showed up at my door, the agents showed me a piece of paper,” Tan began as she became emotional.

At that point, one of her young sons began crying in the committee room, prompting then-Senate Judiciary Chair Patrick Leahy (D-Vt.) to ask Tan to halt her testimony as he tried to console the child and invited him to move into a back room.

“I have a grandson the same age,” Leahy said. “I just want you to know, young man, your mother is a brave woman. You should be very proud of her.”

As the video of the hearing shows, Tan’s son apparently elected to stay in the room as Tan continued her testimony.

“Before I knew it, I was handcuffed and taken away like a criminal as Jay’s frail mother watched in hysterics,” Tan said. “I was put in a van with two men in yellow jumpsuits and chained and searched like a criminal in a way that I have only seen on television and in the movies. All the while my family was first and foremost the center of everything on my mind. How would Jay work and take care of the kids if I was not there? Who would continue to take care of Jay’s ailing mother, the mother I had come to love, if I was not there? Who would be there for my family if I was not there? In an instant, my American family was being ripped away from me.”

Tan recalled when she returned she had an ankle bracelet placed on her and tried to keep it hidden from her children.

Although Leahy sought to console the family, Sessions had a reaction that wasn’t as sympathetic, according to a contemporaneous report in The New Republic from gay journalist Jamie Kirchick:

Unmoved, however, was Alabama Republican Jeff Sessions, ranking minority member of the Committee and the only Republican to bother to attend the hearing. At the sight of the weeping boy, according to a Senate staffer who was at the hearing, Sessions leaned towards one of his aides and sighed, “Enough with the histrionics.” Sessions’s press secretary did not return a call seeking comment.

Sessions’ reported derision of the emotional display as “histrionics” is consistent with his opposition to same-sex marriage, his support for Donald Trump’s plan to expel millions of undocumented immigrants from the United States, his view that the Justice Department shouldn’t have stopped defending the Defense of Marriage Act in court and his stated belief the U.S. Supreme Court ruling for marriage equality nationwide was “unconstitutional.”

Rachel Tiven, executive director of Lambda Legal, told the Washington Blade she “of course” remembers the incident seven years ago during her tenure as chief of Immigration Equality, which helped facilitate the hearing.

“The attorney general does not have the power to rescind laws, executive orders, regulations, or guidance issued by other federal agencies,” Tiven added. “What is of great concern, however, is the attorney general’s role in determining the position of the federal government in lawsuits in which it is sued, the cases the Department of Justice chooses to bring, and who will fill high-level positions at the Department of Justice. In the years ahead, Lambda Legal will protect and defend LGBT and HIV+ people, and help lead the resistance to attacks on the civil rights of all.”