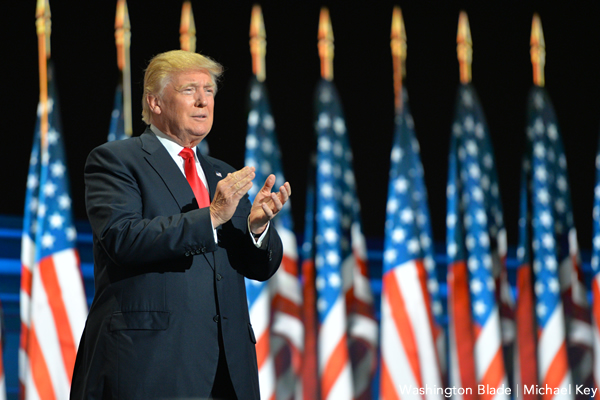 The National Organization for Marriage in a blog post Wednesday unveiled a four-point plan aimed at undoing LGBT rights advanced under the Obama administration, including marriage equality and writing discrimination into the law in the form of the First Amendment Defense Act.

Here is our plan:
We will work with President Trump to nominate conservative justices to the U.S. Supreme Court, individuals who will adhere to the words and meaning of the constitution. Such justices will inevitably reverse the anti-constitutional ruling of the Supreme Court imposing same-sex ‘marriage’ on the nation in the Obergefell decision, because that decision lacked any basis in the constitution.

We will work with President Trump to rescind the illegal, over-reaching executive orders and directives issued by President Obama, including his dangerous “gender identity” directives, attempting to redefine gender just as he sought to redefine marriage.

We will work with President Trump to reverse policies of the Obama administration that seek to coerce other countries into accepting same-sex ‘marriage’ as a condition of receiving US assistance and aid. It is fundamentally wrong for a president to become a lobbyist for the LGBT agenda, and we are confident that will end in the Trump administration.

We will work with President Trump and Congress to pass the First Amendment Defense Act (FADA), which Mr. Trump supports. FADA is critical legislation to protect people who believe in marriage from being targeted by the government for persecution.

It’s unknown whether Trump would follow through with any of these actions. Although Trump had a reputation for being a relatively pro-LGBT candidate among other Republicans, he said he opposes marriage equality, would rescind the Obama administration actions he thinks are unconstitutional and would sign the First Amendment Defense Act into law.

“This includes the Tenth Amendment guarantee that many areas of governance are left to the people and the States, and are not the role of the federal government to fulfill,” the website says. “The Constitution declares that as Americans we have the right to speak freely, share and live out our beliefs, raise and protect our families, be free from undue governmental abuse, and participate in the public square.”

According to schematics widely circulated in the media, the president-elect has selected for his transition team supporters who have anti-LGBT histories.

Leading the team on domestic issues is Ken Blackwell, who serves as a senior fellow at the Family Research Council and on the board of directors for Becket Fund for Religious Liberty. In addition to supporting measures that would have banned same-sex marriage, Blackwell when seeking the position of chair of the Republican National Committee in 2009 said being gay is a choice and can be changed.

JoDee Winterhof, the Human Rights Campaign’s senior vice president for policy and political affairs, said in a statement the selection of Blackwell to lead domestic policy for the transition is bad news for LGBT people.

“Ken Blackwell is a man who has spent his entire career going after LGBTQ Americans,” Winterhof said. “Blackwell’s leadership role in president-elect Trump’s transition team should be a major wake up call for anybody who ever had any doubt that LGBTQ people are at risk.”

According to Bloomberg, reportedly in consideration for the position of U.S. attorney general is former New York City Mayor Rudy Giuliani. Sen. Jeff Sessions (R-Ala.), who vigorously opposed “Don’t Ask, Don’t Tell” repeal, has expressed interest in the position of defense secretary and Trump has reportedly told the senator he could have his pick of appointments.

Other members of the Trump transition team cited as red flags by the Human Rights Campaign are former Attorney General Ed Meese, a fellow at the Heritage Foundation who has said same-sex marriage “shows how the culture has deteriorated over two centuries,” and former U.S. Office of Personnel Management chief Kay Cole James, who in her book “Transforming America from the Inside Out,” compared gay people to drug addicts, alcoholics, adulterers, or “anything else sinful.”

“Ed Meese and Kay Cole James, who are also reported to have key roles, have been vocal opponents of equality and other issues we care deeply about,” Winterhof said. “The people President-Elect Trump picks to serve in his administration will have a huge impact on the policies he pursues. We should all be alarmed at who he’s appointing to key posts on his transition team.”