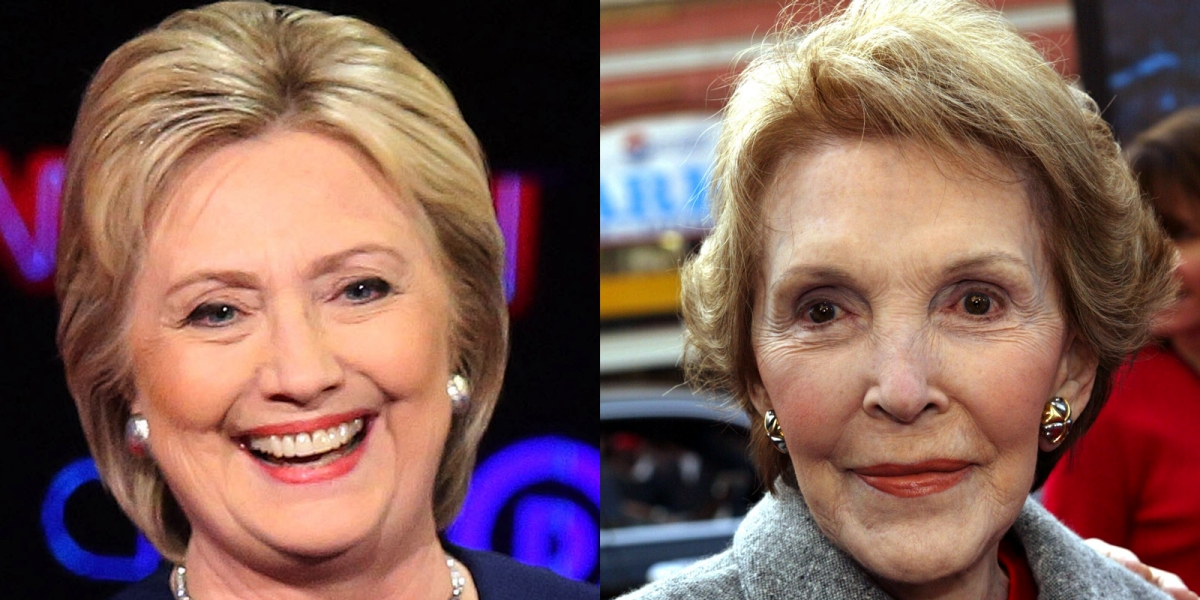 BY CHRIS JOHNSON  |  The gaffe Hillary Clinton made in March crediting the Reagans with starting a “national conversation” on HIV/AIDS angered many of her LGBT supporters and created stress in the campaign before she issued an apology reflecting on the epidemic, according to campaign emails made public by WikiLeaks over the weekend.

Shortly after Clinton made the remarks in March on MSNBC during Nancy Reagan’s funeral, she issued an apology in which she said she “misspoke” about the Reagans’ record, but Clinton supporters outside the campaign insisted that wasn’t enough.

Richard Socarides, a gay New York-based Democratic activist and Clinton supporter, emailed senior campaign officials to warn them the candidate should address the issue “before this spins out of control.”
“Nancy Reagan in fact helped start a national conversation about HIV and AIDS but as we all know it was far too little and way too late,” Socarides wrote. “When Bill Clinton ran for president in 1992 it was on a platform that was highly critical of the Republican response to the HIV crisis. It had been a record of neglect. As first lady and as senator and as Secretary of State Hillary has been a champion for increased funding and raising awareness.”

Echoing Socarides’ comments in a subsequent email was Steve Elemendorf, a gay Democratic lobbyist, who said he “cannot overstate how big a problem” the remarks were and called for immediate action from the campaign.

Kristina Schake, a deputy communications director for the Clinton campaign, wrote in another email that Clinton ally and Human Rights Campaign President Chad Griffin was receiving complaints about Clinton’s remarks and his response, which condemned the remarks but didn’t reference the candidate herself.

“I stayed with Chad last night who was receiving lots of angry calls and notes from people that he didn’t call her out by name,” Schake wrote. “He wouldn’t do that to her and kept stressing she just made a mistake, but suggested we need to do something more today to protect her. She has a great record and we lost a lot of ground messaging-wise.”

Dominic Lowell, the Clinton’s campaign LGBT liasion, distributed an email to coordinate the response, saying “most people are expressing palpable anger and hurt over the comments” in the last 24 hours over the remarks.

“If I had to break things down, I’d put people into three categories: 1) supporters who were horrified at the comment but accept the apology; 2) supporters who are angry and can only be mollified with a longer statement, tv appearance, roundtable, or something else big that shows she ‘gets it,’” Lowell wrote. “They will continue to make hay in the meantime; and 3) Bernie folks who are happy to have a new line of attack.”
(Indeed, Sen. Bernie Sanders, Clinton’s opponent in the Democratic primary, in the aftermath of Clinton crediting the Reagans for their efforts on HIV/AIDS said on CNN’s “State of the Union” he doesn’t “know what she was talking about.”)

Lowell expressed concern about the second group whom he identified, which he said consist of “Queer Nation, ACT UP, and other activists who are out, loud, and not afraid of direct action or aggressive confrontation,” adding he didn’t “want this to fester.”

Possibilities Lowell raised as a response included bumping up the HIV/AIDS policy roll out or putting together a roundtable. Lowell said Robbie Kaplan, a Clinton supporter and the attorney who successfully argued against the Defense of Marriage Act, had volunteered the New York-based Gay Men’s Health Crisis to assist with the effort.

(The exchange reveals the idea of a roundtable with HIV/AIDS activists, which was publicly requested after the remarks and occurred months later, was under consideration at this time.)

Teddy Goff, a technology strategist for Clinton, writes the problem with the candidate is supporters don’t understand “on a fact level, what happened and how she could have gotten so mixed up.”
“And in the absence of any explanatory information, they assume the worst — like that this was some cynical political strategy of ours,” Goff wrote. “(Which, I would note, makes no sense — why would our strategy be to piss everyone off? — but regardless.)”

Jessica Morales Rocketto, digital organizing director for the Clinton campaign, raised the possibility of responding in the “Out for Hillary” Facebook group, which she said had 14,000 members and “the largest LGBT community of Hillary’s supporters I know.”

“These are friendlies, they are already carrying water for us making sure the apology is out there, and they firmly sit in groups 1 and 2 that Dom identified,” Rocketto said.

Rocketto added sending talking points out to supporters “really worked” because “they are popping up everywhere on the supporter Facebook groups.”

Recognizing a distinction between younger and older Clinton supporters, Dennis Cheng, national finance director for the Clinton campaign, said using the groups would be helpful, but not enough because “a lot of our people (esp those who are older who lived through the 80s) want to see and hear her address it directly, given that they saw and heard her Reagan remarks on TV.”

After Robbie Mook, who’s gay and Clinton’s campaign manager, wrote in a subsequent email a Medium post would be a good opportunity for Clinton to express herself, the campaign settled on that course of action.

“She could open it by saying she misspoke and apologizes for that and wanted to make sure people understand what she will do,” Mook wrote.

Megan Rooney, speechwriter for Hillary Clinton, issued the first draft of the Medium post. In the initial draft, Clinton was to say she was wrong about the Reagans and “said so right away,” but those words were omitted after Goff wrote he didn’t think “that gets us any extra credit” and sounded “a hair defensive.”
Schake followed up with edits from Griffin, who changed the draft to more clearly state Clinton was sorry “for the pain my comments caused” and the persistence of HIV/AIDS among gay and bisexual men, transgender people and communities of color. Rooney said the chances of Clinton “OK-ing this statement with that top are slim” and the campaign would walk that back, although the phrase “made a mistake” remained in the final writing.

As Xochitl Hinojosa, the Clinton campaign’s LGBT media spokesperson, raised concern about upcoming stories in the LGBT media intending quote Clinton supporters who say the apology isn’t enough, the campaign scrambled to get approval and put the statement online.

“I think we really should do everything we can to get this up today, if at all possible (fingers crossed),” wrote Clinton campaign director of content and creative Lauren Peterson. “Does not seem to be dying down online, either.”

After approval by Clinton — and a few additional tweeks, including the removal of a reference to increase funding for PEPFAR in favor of a more general plan for “global funding” — publication was initially set to go, then halted for additional tweeks. A reference to “brave men and women” who fought HIV/AIDS was changed to “brave lesbian, gay, bisexual, and transgender people, along with straight allies.”

The final Medium post has Clinton asserting she was wrong about the Reagans and touting her record in speaking out in favor of efforts to combat HIV/AIDS at the domestic and international levels and mentioned her plan to achieve an “AIDS-free generation.” Among the proposals in the draft were extending Medicaid, reforming HIV criminalization laws, capping out-of-pocket drug expenses for HIV/AIDS medications and expanding access to PrEP.

“We’ve come a long way,” Clinton says in the post. “But we still have work to do to eradicate this disease for good and to erase the stigma that is an echo of a shameful and painful period in our country’s history.”
When the statement when online, staffers responded with jubilation. Jennifer Palmieri, the Clinton campaign’s director of communications, wrote, “Praise, Jesus!” Clinton campaign spokesperson Dan Schwerin commended his colleagues for the post and called it “amazing actually.”

Praise also came from outside the campaign. Jenna Lowenstein, digital director for the Clinton campaign wrote on Medium “the top comments are overwhelmingly positive (and some are quite moving).” Lowell passed around a statement from former Human Rights Campaign President Joe Solmonese, who said the post “literally brought [a] tear to my eyes,” and from another statement from AIDS activist Larry Kramer, who was angered with Clinton’s remarks, but satisfied with the Medium post.

Ann O’Leary, senior policy adviser for the Clinton campaign, shared a message she said came from a couple, Viki and Jen, who were among the couples to marry in San Francisco by then-Mayor Gavin Newsom in 2004.

“Jen and I wanted to tell you how incredibly impressed we were with HRC when she was able to apologize for what she said about the Reagans etc. in such a remarkably humble and authentic way,” the message reads. “She showed true leadership, something we are not seeing a lot of these days. We are so proud of her and moved by her courage to open herself up publicly in this manner. Definitely presidential material!!”

Even though Clinton twice apologized for the remarks and recommitted herself to fight HIV/AIDS in the aftermath, it remains unclear why she made the remarks in the first place. Some have speculated she confused Nancy Reagan’s work on Alzheimer’s disease with HIV/AIDS; others claims the remarks were an effort to curry favor with Reagan Democrats.