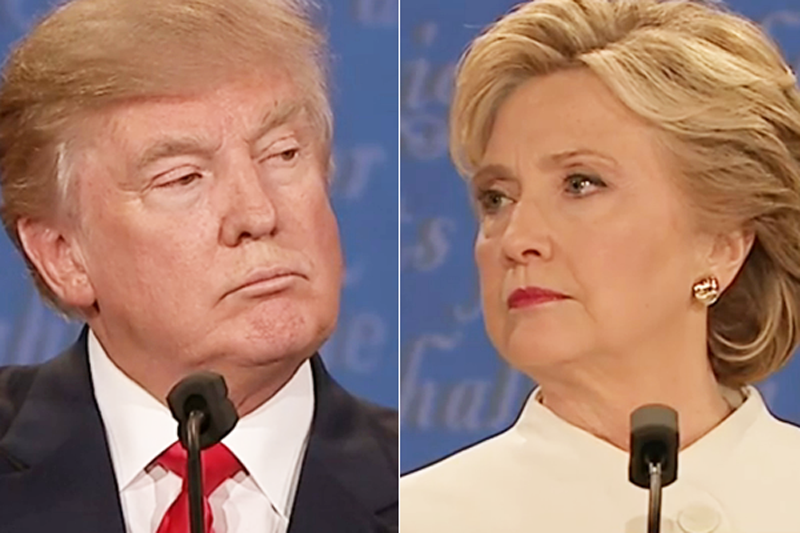 BY CHRIS JOHNSON  |  Hillary Clinton took a more aggressive approach in her final debate with Donald Trump on Wednesday, while her opponent made waves by signaling we wouldn’t accept the results on Election Day if she wins.

During the debate at the University of Nevada in Las Vegas, Trump said in response to whether he’ll accept the election results that he’ll “look at it at the time” — an indication he won’t concede the election if he loses, as polls predict — and “keep you in suspense.”
“If you look at your voter rolls, you will see millions of people that are registered to vote — millions, this isn’t coming from me — this is coming from Pew Report and other places — millions of people that are registered to vote that shouldn’t be registered to vote,” Trump said.

That memorable and unprecedented moment of the debate was followed by a strong rebuke from Clinton, who said she was “appalled” that a presidential nominee from a major U.S. party might not accept the election results.

“So that is not the way our democracy works,” Clinton said. “We’ve been around for 240 years. We’ve had free and fair elections. We’ve accepted the outcomes when we may not have liked them. And that is what must be expected of anyone standing on a debate stage during a general election.”

Although moderator and Fox News anchor Chris Wallace asked no LGBT-related question during the debate, LGBT issues came up in passing several times in response to other questions.

On appointments to the U.S. Supreme Court, Clinton identified among her priorities justices who would uphold LGBT rights and marriage equality.

Trump brought up LGBT issues when seeking to attack the Clinton Foundation for accepting donations from countries that criminalize homosexuality. Pointing out that the foundation has accepted between $10-$25 million from Saudi Arabia, he said it took money from a nation that “push gays” off buildings.

Despite Trump’s assertion, the Islamic State of Iraq & Syria has the reputation for throwing gay men from buildings, not Saudi Arabia (although being gay is indeed criminalized there).

Clinton, who never responded to Trump’s call to return the money, defended her family’s foundation by citing its accomplishments, including ensuring access to HIV/AIDS medication in countries where it otherwise wouldn’t be available.

“The Clinton Foundation made it possible for 11 million people around the world with HIV/AIDS to afford treatment, and that’s about half of all the people in the world who are getting treatment,” Clinton said.

She also took a knock at the Trump Foundation by noting it paid for a six-foot portrait of Trump, adding, “I mean, who does that?”

In response to Trump’s criticism of her plan to increase the number of Syrian refugees in the United States, Clinton referenced Omar Mateen, the shooter who killed 49 people and wounded 53 others at a gay nightclub in Orlando, Fla., as she explained the refugees would be carefully vetted.

“That does not solve our internal challenges with ISIS and our need to stop radicalization, to work with American Muslim communities who are on the front lines to identify and prevent attacks,” Clinton said. “In fact, the killer of the dozens of people at the nightclub in Orlando, the Pulse nightclub, was born in Queens, the same place Donald was born. So let’s be clear about what the threat is and how we are best going to be able to meet it.”