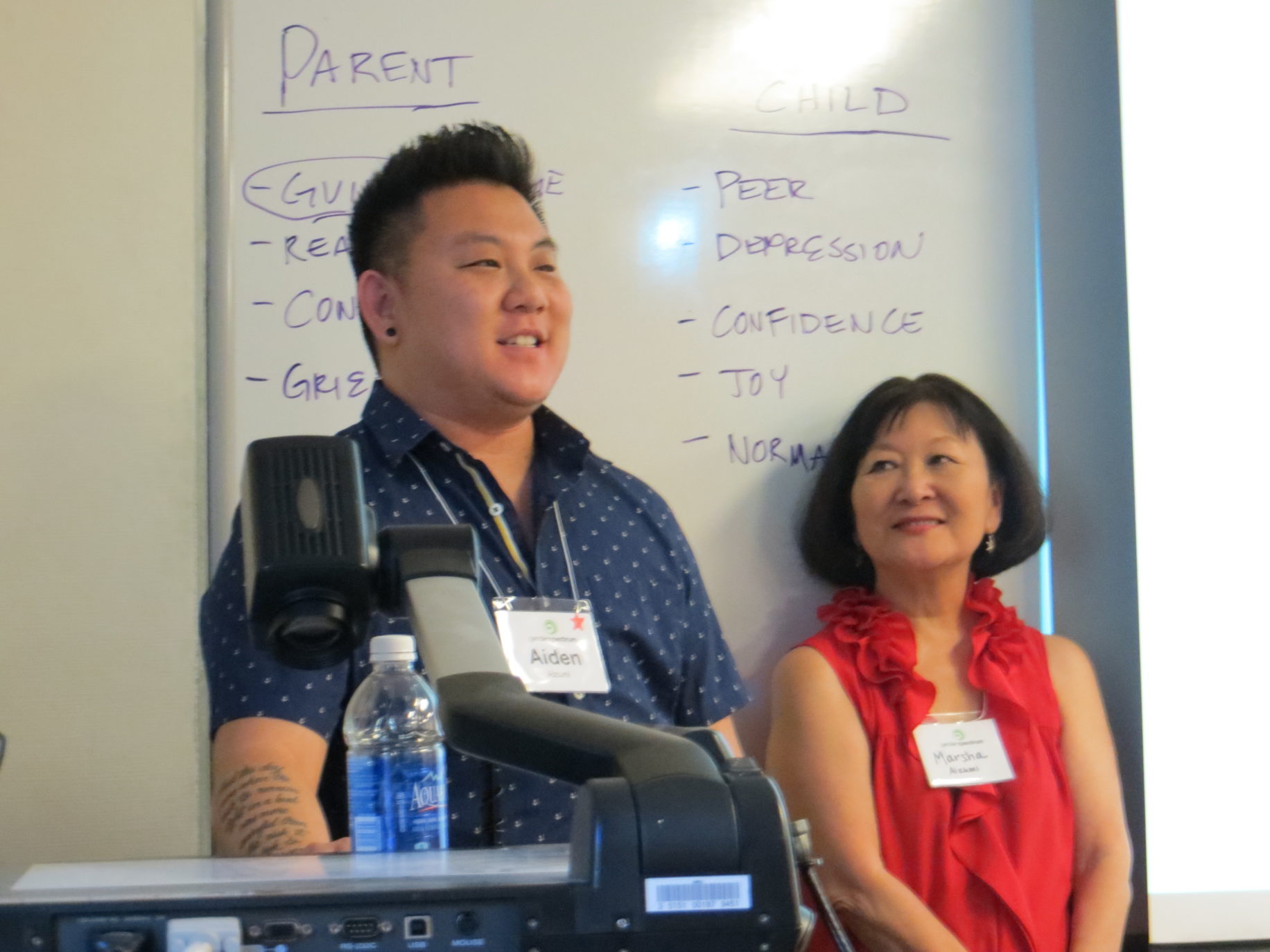 BY KAREN OCAMB  |  The coming out process can be devastating for LGBT youth with many having to choose between the freedom of authenticity or the invisible slavery of the closet, chained to parental and religious expectations of living a life bound by societal norms.

Often overshadowed or ignored, however, is the coming out process for the loving parents who also must deal with internalized expectations and face possible  societal rejection.It’s a process that involves not just the neighbor next door but centuries of ancestors who would be dishonored with the slightest deviation from tradition.

Such is the pressure faced by LGBT Asian Pacific Islander youth and their families. And to make the coming out process even more difficult, while Japanese youth can now look up to Star Trek actor and social media hero George Takei, there are no role models for Nikkei Japanese parents.

Marsha Aizumi and her 28 year old, married transgender son Aiden are determined to help. They have co-written a book, Two Spirits, One Heart, teach LGBT diversity to charter school teachers and Aizumi is bringing an Asian face to PFLAG through a new API chapter she founded in the San Gabriel Valleywww.sangabrielvalleyapipflag.com

“When kids come out, they can bring their parents to our meeting to see other parents who look like them and speak their language,” Aizumi says, noting that there also parents who speak Chinese and Korean at the meetings, as well.

Many API communities have great language barriers for their English-speaking children to explain who they really are to their parents. “There are often no words to convey gay, lesbian, transgender, except those that are negative.”

The first Okaeri event was held in 2014 and, because it was so needed, over 200 people from the ages of 8 to 80 came from as far away as Canada, New York and Hawaii to participate.

“Okaeri” means “welcome home,” a humble bow and warm extended hand or an enthusiastic wave to the perhaps frightened and shame-filled parent longing for education and understanding. Aizumi understands the need.

“During World War II, my family was placed in concentration camps, even though they were American citizens,” Aizumi says. “I feel that  Nikkei families try to live in a way that they do not bring negative attention to themselves. They know what happened when that was the case during the war.  We studied hard to get good grades, we were taught to only do things that would be bring honor and pride to our families— because it wasn’t just us that we were representing, it was all our family. And I think in some way, it was also a matter of safety.”

Aizumi says she was confused, hurt and lost in shame and fear of dishonor when her beloved child told her the truth.

“The Asian culture is steeped in honor, saving face and strong family ties,” she says. “When Aiden first came out, I was so ashamed that I went in the closet.  I could hear the voices of my family both living and dead saying that I was bringing dishonor to our whole family and our whole family name by being the mother who had a lesbian daughter, then later, a transgender son. And since there were no visible faces and voices in the Nikkei community, this only verified my feelings that I was a bad mother.”

But Aizumi found the courage to buck tradition and seek outside help, even though there were no Asian faces at the PFLAG meeting she attended.

“Today I believe that I bring the greatest honor to our family by being out and visible as a parent. And more and more parents are coming out to publicly love and support their LGBTQ children,” she says.

“I think the main thing our API PFLAG group does is provide visibility and voice to our community.  We show that being LGBTQ does not make you a bad person or lessen your chances for success,” she says. “We talk about how being LGBTQ is not a choice—but we, as parents, have a choice to stand by our children or not.  Many parents are so afraid for their children and we show them that they can have a wonderful life, because all we truly want is that our children to be happy. They cannot be happy if they are living in the closet and can’t live as their true selves.”

For more information on the Okaeri event, visit their website: www.okaeri-losangeles.org