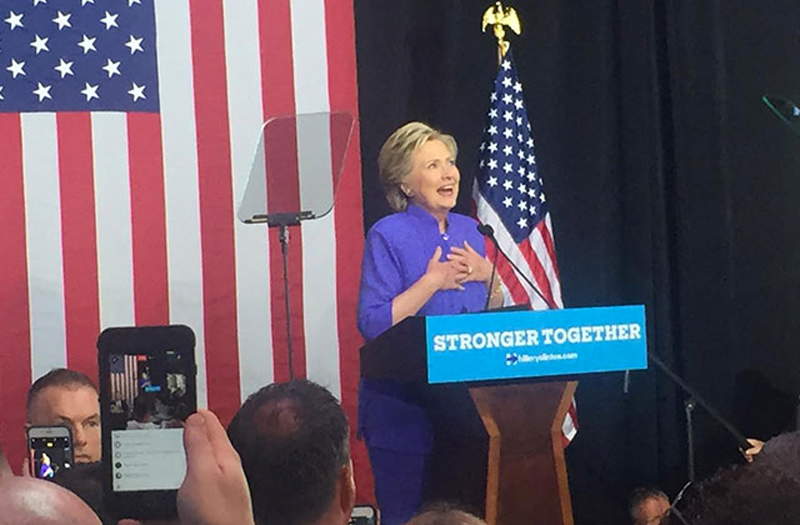 BY JOHN MCDONALD | Visiting the largest concentration of LGBT Floridians on Sunday, former Secretary of State Hillary Clinton assured supporters she would continue to fight for equality.

“Here’s what I will do as President,” Clinton told a packed crowd inside the Manor Complex in Wilton Manors. “We will call upon Congress to pass the Equality Act.”

The line received the biggest applause in a 20-minute speech delivered to what Clinton acknowledged was her base of support.

“I know I’m speaking to the choir here,” she said.

The Democratic nominee for the U.S. Presidency made a surprise stop in Wilton Manors with just nine days remaining until the general election’s conclusion. Polls have Clinton leading nationwide over her Republican challenger Donald Trump, but Florida – and its 29 electoral college votes — is a battleground prize.

Democrats outnumber Republicans 2-to-1 in Broward County and turning out those Democratic votes is key to Clinton’s strategy of winning Florida. The majority of self-identified LGBT voters have long been aligned with the Democratic Party and Clinton reminded those voters of just what is at stake this election cycle.

“Donald Trump has a terrible record on LGBT rights,” Clinton said. “This election will determine whether we continue the progress we’ve made or let it be ripped away. We know Trump has promised he’ll appoint Supreme Court justices who will overturn marriage equality and that he will repeal President Obama’s executive actions to protect LGBT people from discrimination.”

Clinton went on to give examples of Trump’s unsavory ways. She said one of Trump’s golf courses fired an employee who had been harassed at work because they were gay. Elsewhere, in New York City, Trump showed up for a photo-op at a children’s HIV charity and left without offering a donation, Clinton said.

“Who does that?,” Clinton asked the crowd. “Donald likes to construct an image that he is generous, but it’s a façade. He abuses his power and games the system.”

“We can’t take this election for granted,” Resnick said. “The courts are so important for our rights.”

Keeping with the spirit of the community, members of the Gay Men’s Chorus of South Florida performed the national anthem and later Jennifer McClain, a popular performer at the nearby Alibi bar, entertained the crowd with a special rendition of “Man! I Feel Like A Woman.”

“The best thing about being a woman, is our prerogative to have a little fun,” sang McClain, dressed in a red, white and blue outfit.

Police estimated the crowd to be a little over two thousand inside the complex and another thousand who were re-routed into an overflow area outside. DJ Tracy Young provided the music, warming up attendees with songs such as “Holiday,” “Celebration,” “Dancing Queen” and “Respect.”

“DJs speak through their music,” said Miik Martorell, a DJ himself and President of Pride Fort Lauderdale.

Martorell said Clinton holding an event at a gay club speaks volumes as to how far the country has evolved on LGBT equality.

“This is huge,” Martorell said. “I don’t know if there has ever been a Presidential candidate speak in a gay club.”

Security was tight on Sunday in Wilton Manors just four months and three hours away from the Pulse Nightclub tragedy.

“We are going to bring people together to reform our gun laws and keep guns from falling into the wrong hands so that what happened in Orlando will never happen again,” Clinton said.

As for LGBT issues, Clinton said there is still much work to be done.

“There is still no federal law that stops an employer from refusing to hire someone just because he or she is LGBT,” Clinton said.

By passing the Equality Act, Clinton said, “we will then be able to protect LGBT Americans from discrimination in all aspects of our lives.”

Also on her list is achieving an AIDS free generation, taking on homelessness, bullying and violence among LGBT youth and ending the “harmful practice of so-called conversion therapy.”

“LGBT kids don’t need to be cured of anything, they just need to be accepted,” Clinton said to raucous cheers.