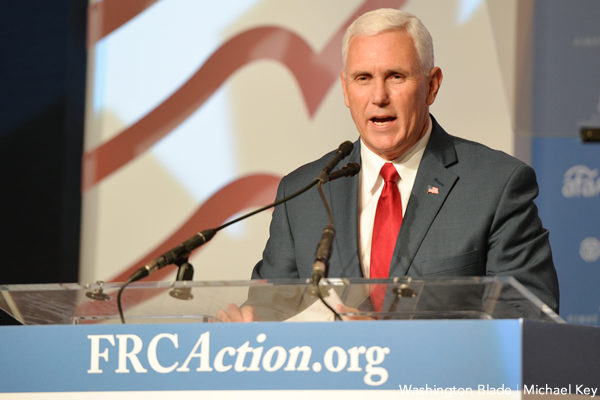 BY CHRIS JOHNSON  | Addressing a crowd of anti-LGBT advocates Saturday at the Values Voter Summit, Republican vice presidential nominee Mike Pence seized on comments Hillary Clinton made the night before calling half of all Trump supporters a “basket of deplorables.”

“It’s extraordinary to think of it,” Pence said. “She referred to those people as irredeemable. Well, I will tell you right now, I campaign on a regular basis with Donald Trump. I campaign all across this country for Donald Trump. Hillary Clinton’s low opinion of the people that support this campaign should be denounced in the strongest possible terms.”

Seeking to draw a contrast to Clinton’s characterization of Trump supporters, Pence told the crowd of social conservatives in the audience “the truth of the matter” they’re “hardworking Americans.” An audience member shouted back, “That’s right!”

“Farmers, coalminers, teachers, veterans, members of our law enforcement community, members of every class of this country, who know that we can make America great again,” Pence said. “So let me just say from the bottom of my heart: Hillary, they are not a basket of anything. They are Americans, and they deserve your respect.”

During an LGBT fundraiser in New York City with Barbra Streisand, Clinton said half of Trump supporters are backers are “desperate for change,” but the other half belonged in a “basket of deplorables.” The Trump campaign immediately condemned the controversial remarks and called on Clinton to withdraw them.

“You could put half of Trump’s supporters into what I call the basket of deplorables. Right?” Clinton reportedly said to laughter and applause. “The racist, sexist, homophobic, xenophobic, Islamaphobic — you name it. And unfortunately there are people like that.”

When Pence initially said he intended to discuss Clinton’s remarks, he rummaged through papers before him and said, “Let me see where someone put them here.” After the momentary pause, Pence initiated his criticism.

But Pence’s criticism of Clinton wasn’t limited to her remarks at the LGBT fundraiser and said the Democratic Party “is literally running the most dishonest candidate ever.” The Indiana governor said Clinton’s tenure as secretary of state “must be recalled,” invoking the 2012 attacks at the American diplomatic compound in Benghazi.

“And then when she was asked about it before a Senate committee, Hillary Clinton literally said, quote, ‘What difference at this point does it make?’” Pence said. “Well, let me say as the proud father of a United States Marine, anyone who said that, anyone who did that should be disqualified from ever serving as commander in chief of the armed forces of the United States of America.”

Pence also blamed Clinton for the growth of the Islamic State of Iraq & Syria and the Iran nuclear deal he said led the U.S. to pay billions to the country.

In the context of the viewpoint among social conservatives, the term “religious liberty” has been considered code for enabling anti-LGBT discrimination. The idea of “religious freedom” has been used as justification for states to advance legislation that would allow for denial of rights and services to LGBT people.

The vice presidential nominee also maintained Trump would appoint justices to the U.S. Supreme Court in the mold of the late anti-LGBT U.S. Associate Justice Antonin Scalia. In contrast, Pence said Clinton’s nominees would be “more of the kind of judges that legislate from the bench instead of upholding our fundamental liberties.”

Pence promised Trump as president would “repeal every single Obama executive order that is stifling growth and stifling the freedom of the American people.” Among the directives that Trump has said he’d rescind is guidance to schools instructing them not to discriminating against transgender students, including by barring them from the bathroom consistent with their gender identity.

A favorite among social conservatives, Pence speaks to the Values Voter Summit after last year signing into law as Indiana governor a “religious freedom” bill seen to enable sweeping anti-LGBT discrimination. Amid pressure from the business community and LGBT advocates, Pence was forced to signed into law a fix limiting the potential discriminatory impact of the measure.

Although Pence joked he and Trump could not be more different in terms of background and personal wealth, Pence said he grown to like Trump in the short time he has known the candidate and is convinced they share the same vision.

— Chris Johnson, of the Washington Blade, is a special contributor to The Pride LA from The National Gay Media Association.