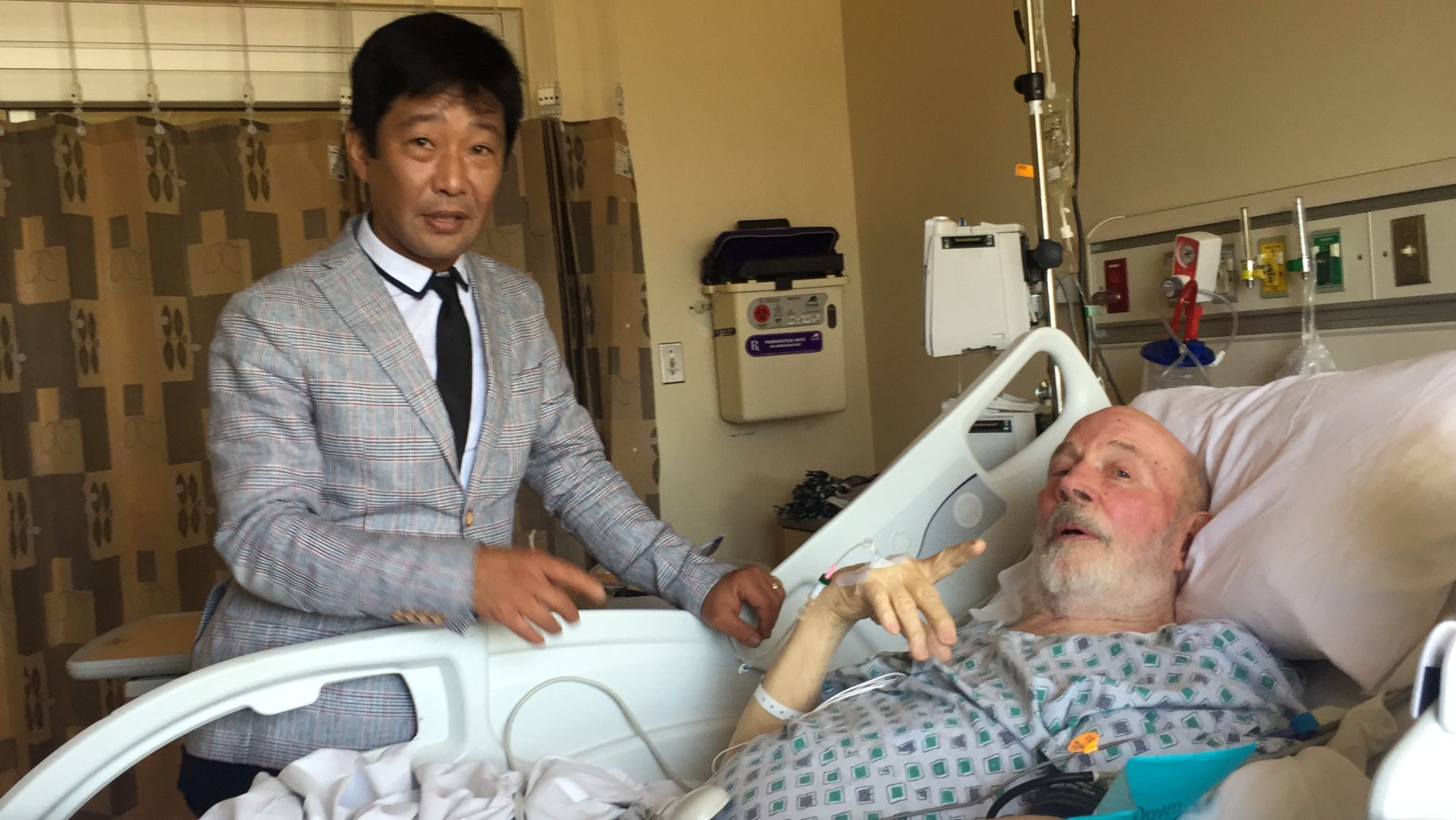 BY TROY MASTERS  (photos and video by Maria Higa) |  Nothing was going to stand in their way, not cancer, not the Pacific Ocean, not immigration, not money….nothing.  That’s just the way love works.

Takashi Nakaya, 53, returned to the Los Angeles bedside of his husband, Dale Green, 85.  Dale, a Korean War Veteran, is in critical care at the West L.A. Veterans Administration Hospital where he is being treated for Stage 4 Melanoma.

The couple were married two weeks ago in a historic VA Hospital bedside ceremony, possibly the first same-sex wedding to ever occur in the VA Hospital system certainly the first in Los Angeles. The entire staff of the West L.A. VA Hospital, after hearing that the wedding was to occur in moments,  joined their ceremony and helped the couple celebrate their love.

Takashi had to return to their home in Toyohashi, Japan to return to work and to take care of their home, but only after initiating the paperwork that would be necessary for him to remain in the U.S. on a green card.  There had been some concern that Takashi, because of the application, might encounter some problems upon reentry, but he made it through without any trouble.

What the future holds is uncertain.

After doctors told Dale that they were no longer able to continue treating him for his disease, Dale made a bold decision and ordered doctors to keep him alive at all costs so he could see Takashi.  After radiation therapy was terminated, Dale’s ability to speak and move his limbs returned within days, his appetite returned somewhat and his vital readings return to normal.

Dale, learning that Takashi was on his way from Japan to be with him, appeared to bounce back.

He has spent the past three days anxiously awaiting the return of his husband.

After their story was featured on this website, people from around the world offered their support and love.  One person offered to procure a private jet to fly Dale home if he was able to.  Another offered them a home in Los Angeles.  The VA Hospital offered Dale their “Wish” program and Takashi a place to stay nearby.

Takashi says “All I can say is WOW!  There are still good people in this world.  We are more than blessed and so very touched.”

Matt Damon Admits To Using Anti-Gay Slur But Then Backtracks

Actor Matt Damon has gotten himself into hot water with fans part of the LGBTQ community after admitting that he...