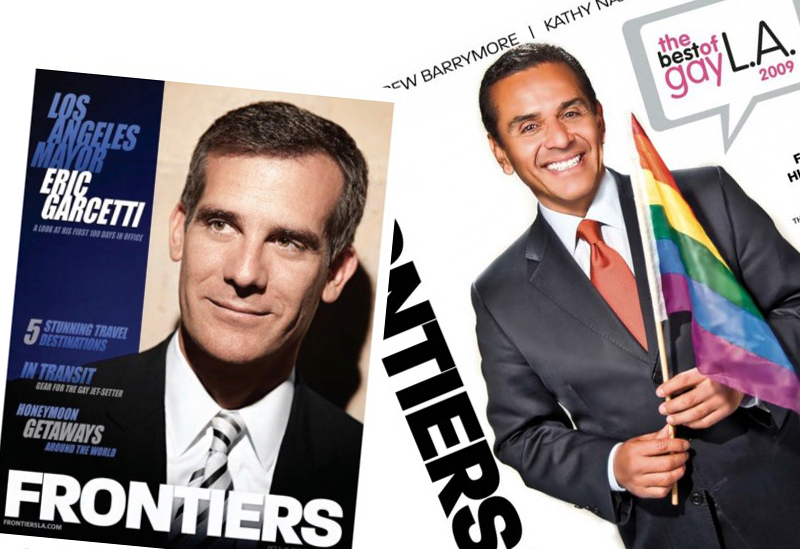 BY KAREN OCAMB  |   Wednesday, Sept. 28, will forever stick in my memory as the day a once proud LA LGBT institution sputtered to an ignoble end.

All day my phone rang and my email was jammed with questions, the most prominent of which was basically: do you feel gratified and vindicated after having been fired and treated so shabbily by the owners of Frontiers?

No. Actually, I feel sad.

The shuttering of Frontiers Magazine and its accompanying website, if the initial reports are true, symbolize the end of an era where being of service to LGBT people was the driving force, the heart and soul of a mission to recognize and report on the diverse span and development of a community of outsiders who loved, fought and needed each other.

The late AIDS activist Michael Callen used to say that the very concept of a “gay community” was “a useful fiction.”

That seemed never more true than during the 1970s as many gay men dove head-first into wild, hedonistic pleasure — as a birthright of the sexual liberation movement. That’s what Frontiers publisher Bob Craig told me when we first met in late 1988.

But AIDS changed everything.

It was Frontiers’ purpose to do its part in informing the frightened community—from what was happening in the medical and scientific front, to political efforts for and against us, to the protests of ACT UP/LA and Queer Nation to the exploding artistic response from people like Paul Monette, Tim Miller, Michael Kearns and Jim Pickett, and Marlon Riggs and Essex Hemphill.

As I wrote in Windy City Times’ publisher Tracy Baim’s book “Gay Press, Gay Power: The Growth of LGBT Community Newspapers in America,” Frontiers was founded in 1982 by Greg Carmack and Jerry Hyde to give Los Angeles gay culture and advocacy a voice. In 1983, the pair asked Mark Hundahl, the heterosexual owner of Probe (popular gay disco), for a $5,000 investment, which he gave in exchange for two years of advertising.

The same year businessman Bob Craig came on board and became publisher. A later clash prompted Hundahl to move his advertising to Edge, where he met sales associate David Stern, with whom he later became partners. Hundahl and Stern created IN Los Angeles Magazine in 1997 as a kind of “sister” publication to Frontiers. “Frontiers would be more like Newsweek, while IN would be the gay People,” David Stern told me for Baim’s book.

I came to LA from New York in late 1983 but my only real connection to the LGBT community was through my 12 Step program, participating in APLA’s AIDS Walks, taking care of my friends with AIDS and helping create the City of West Hollywood.

In late 1988, John Heilman, who I knew from the cityhood battle, recruited me to do a WeHo cable show “Out and About: Lesbian and Gay West Hollywood,” with co-host Burt Burlant. It was there that I met Bob Craig and Frontiers news editor Aslan Brooke. Wanting to do more for my community than be a care provider for my friends dying of AIDS and as a former producer for CBS News, I asked Bob if I could write for Frontiers.

My first piece was “Ten Days That Shook the FDA” about ACT UP’s massive demonstration for parallel tracking and compassionate release of new AIDS drugs, and the simultaneous hunger strike by AIDS activists Wayne Karr and Lou Lance at the triangle patch of green on Santa Monica and Crescent Heights in West Hollywood.

It turned out that Wayne was also a 12-Stepper so we became close, though we both respectfully fell into our assigned roles of reporter and subject when I was doing a story.

It was like that as I freelanced for Frontiers and other gay publications such as the Bay Area Reporter and Update and the San Diego Gay and Lesbian Times. I reported on the checkbook activists who formed ANGLE in 1989 and created the first-ever gay voting bloc in 1992 for Bill Clinton.

And I learned from pioneers Jim Kepner, Harry Hay, Morris Kight, Paul Monette, Jackie Goldberg, and Dr. Virginia Uribe, who had come to trust my pledge to try to be fair and accurate in my reporting.

It was a privilege to know and bear witness to their soul-sourced commitment to our people.

After Bob Craig died, the ownership of Frontiers and who would controlled the publication came into question.

Things had not always been financially rosy.

One time I walked into the office and found a blank-faced man sitting by the door. He turned out to be a “keeper,” meaning he kept checks as they came in to pay off a substantial debt Bob Craig owed the government.

Of course I saw that as a “story” but was talked out of writing it because the debt was almost paid off and dinging Frontiers’ reputation would not help Bob regain his footing.

I still quibble with myself over that decision but finally think I made the right one for the community.

By 2002, I was ready to go back into mainstream journalism—but Mark Hundahl convinced me to work for him and David Stern at IN.

When I came on board, the publications started to swap missions – IN became more of a newsmagazine while Frontiers became more “lifestyle.” But community service was always a core value.

When then-West Hollywood Mayor John Duran held a series of town halls to publicize the crystal meth crisis, we started publishing a regular column to help people struggling with the addiction.

My heart overflowed when I would get emails from gay men who said that column helped save their lives.

In 2007, Mark and David bought Frontiers and we restored that brand to a position as a political powerhouse with front cover interviews with LA Mayor Antonio Villaraigosa and later, Mayor Eric Garcetti, a cover Garcetti says he keeps in a desk drawer at work.

There were many machinations as the Mark and David tried to keep Frontiers alive and relevant. And even more moves when Mark died and David filed for bankruptcy, eventually selling to Michael Turner.

I gave Michael some ideas about using my old broadcast expertise for the new website—ideas he liked but never tried. Soon thereafter, he sold Frontiers to Bobby Blair, an investor from Florida.

When I was fired by Peter Jackson, who explained they were going in a different direction and news would no longer be a part of the new “lifestyle” publication, I argued that Vanity Fair and other glossy magazines still reported news on their website—and this was a critical election year!

But he didn’t seem to grasp that even their targeted audience of young people would care about that. So I took the “high road,” not wanting to get into what I really thought was going on.

Besides, as a 12 Stepper, I can’t afford feelings of vengeance.

But when Bobby Blair—who had never even deigned to meet me—told Press Pass Q that I was let go to make room for millennials, I got angry—not just for myself, but for all the rest of us who have contributed to the movement and have been tossed aside.

I also think Blair’s apparent arrogance blinded him to the fact that millennials, like the rest of us, want good, solid information about what’s happening in the world from an LGBT perspective so they can make informed decisions.

And a lot of them like history, too. Such disrespect for the next generation.

I worked hard to turn that anger into a sigh.

The screen of my laptop is covered with photos I pulled to share—some of the history I covered while writing for Frontiers. But this one of the late Paul Monette with Sir Ian McKellen sticks with me.

It makes me appreciate the quiet moments in life. How better to respond to your own imminent end than by sharing a laugh with a friend? I will go on.

Frontiers may be revived and go on.

But something has died and it’s time to be sad, say thank you to history and move on.