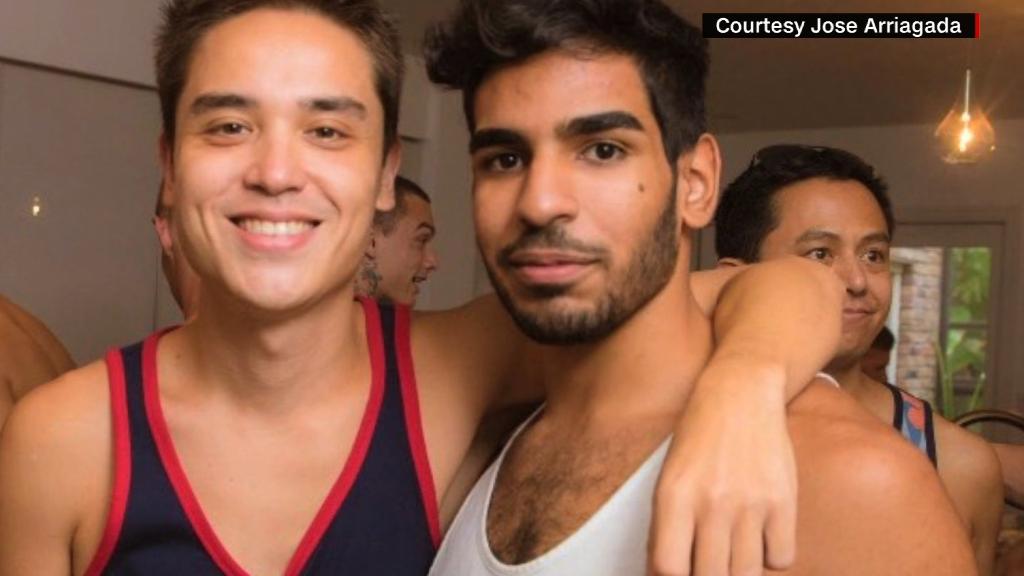 BY MICHAEL LAVERS, REPORTING FROM PHILADELPHIA  |  The mother of a gay man who died inside the Pulse nightclub spoke in support of “common sense” gun control at the Democratic National Convention on Wednesday.

“I’m glad common sense gun policy was in place the day Christopher was born, but where was that common sense the day he died,” said Christine Leinonen in an emotional speech. “I never want you to ask that question about your child.”

Leinonen’s son, Christopher “Drew” Leinonen, and his fiancé, Juan Guerrero, were among the 49 people who died inside the Pulse nightclub in Orlando, Fla., on June 12. Brandon Wolf, who survived the massacre, and José Arriagada, who is Christopher Leinonen’s best friend, stood alongside Christine Leinonen and comforted her as she spoke through tears.

“It takes about five minutes for a church bell to ring 49 times,” said Christine Leinonen. “I know this because last month my son Christopher, his boyfriend Juan and 47 others were murdered at a club in Orlando.”

Christine Leinonen noted that Christopher Leinonen was her only son.

“As I used to tell him, you can’t do better than perfect,” she said.

Christine Leinonen said that her son won an award named in honor of Anne Frank for starting his high school’s Gay-Straight Alliance. She also noted that his paternal grandparents met and fell in love while they were living in a Japanese internment camp during World War II.

“It was in his DNA that love always trumps hate,” said Christine Leinonen.

Christine Leinonen added that her son was “a big Hillary supporter.”

“That’s why I’m here so that I can tell you about the day he was born,” she said, noting that she too supports Hillary Clinton.

Christine Leinonen was a Michigan state trooper when her son was born. She said that hospital personnel put her gun into a safe once she went into labor.

“The weapon that murdered my son fires 40 rounds in one minute,” she added.

The Pulse nightclub massacre, which is the deadliest mass shooting in modern U.S. history, prompted the Human Rights Campaign and dozens of other LGBT advocacy groups to back gun control measures.

“Today, once again, as has been true too many times before, I held and hugged grieving family members and parents, and they asked, why does this keep happening?” said President Obama on June 16 after he and Vice President Biden placed flowers at a makeshift memorial to the massacre victims in downtown Orlando. The two men had just met with their families. “They pleaded that we do more to stop the carnage.”

The former secretary of state placed a bouquet of flowers at a makeshift memorial. She also met with some of the family members of the victims and took part in a roundtable with GLBT Community Center of Greater Orlando Executive Director Terry DeCarlo and other local activists and officials.

Donald Trump in response to the massacre once again called for a temporary ban of Muslims from entering the country. He highlighted the Pulse nightclub shooting during his speech at the Republican National Convention in Cleveland last week.

“Only weeks ago, in Orlando, Fla., 49 wonderful Americans were savagely murdered by an Islamic terrorist,” said Trump. “This time, the terrorist targeted the LGBTQ community. No good, and we’re going to stop it. As your president, I will do everything in my power to protect our LGBTQ citizens from the violence and oppression of a hateful foreign ideology. Believe me.”

COVID 19 is affecting everything from businesses to government and now it is taking a toll on people’s sex lives....

CancerCare helps individuals, families, caregivers and the bereaved cope with the emotional and practical challenges of cancer. Its free services...