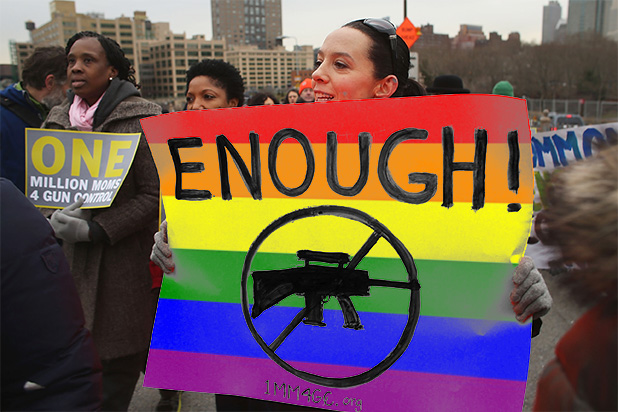 BY KAREN OCAMB  |   Gregory T. Angelo, President of Log Cabin Republicans, calls the 2016 Republican Party Platform “the most anti-LGBT Platform in the Party’s 162-year history.” The Human Rights Campaign says it’s “a platform that perfectly fits not only this week’s parade of anti-LGBTQ convention speakers, including Scott Walker and Ted Cruz, but also reflects the anti-equality hostility of the Donald Trump and Mike Pence ticket.”

The Wall Street Journal noted Monday that all efforts to take out anti-LGBT language from the platform were forsaken in the name of preventing an unruly floor fight.

So despite embarrassing rhetoric claiming that the GOP is a “big tent” party, Donald Trump’s Republican Party has planted its stakes in small-minded, mean-spirited populism that masquerades as pure, old-fashioned patriotism.

And therein lies a significant dilemma for convention organizers and law enforcement at the Republican National Convention gets underway. Ohio is an open-carry state and the governor, former Trump rival John Kasich, has refused to grant the Cleveland police union’s plea to suspend the law during this week’s convention, despite the targeted fatal shootings of police officers in Baton Rouge on Sunday and Dallas police last week prompting more calls for efforts to stop gun violence.

Both Trump and the RNC support the open carry law, albeit guns are not allowed inside the convention.
“It’s not dangerous,” Trump Ohio supporter Steve Thacker told a reporter in Cleveland’s Public Square, just yards away from playing children. “People that carry firearms are typically people that have no need or want of causing any harm to anybody. They want to protect themselves.”

‪The issue of gun violence in the LGBT community was abruptly magnified with the mass shooting at Pulse, a gay nightclub in Orlando. Now frightened and empathetic members of the LGBT community gulp down gallons of concern with each shooting—whether the victim is yet another African American or transgender individual or law enforcement officers in an inclusive department devoted to community-based policing.

“I am overwhelmed,” Tim Murphy, New York-based spokesperson for the new group Gays Against Guns, says in an email. “It seems that there is some politically and racially charged death at the hands of someone with a gun now just about every day, whether it’s white cop on black driver or black gunman on white cops. It’s overwhelming and makes me heartsick and very fearful for the rest of 2016 through the election, especially with Trump promoting such a hostile and phobic atmosphere.”
The idea of open-carry law in Cleveland during the tense atmosphere surrounding the Republican convention “absolutely terrifies me,” says Murphy. “I can’t believe the extent to which the threat of gun violence is permeating the election year so far, it feels like a strange regression back into the Wild West.”
Gays Against Guns (GAG) was founded with the mission to go after the “gun complex,” which Murphy describes as “the whole chain of death from private investors in gunmakers to gunmakers to their puppet, the NRA, to the NRA’s puppets in Congress” with ACT UP-style tactics. He says there will be a large meeting on July 27 to discuss the plethora of issues now surrounding the issue of gun violence.
In the meantime, GAG chapters are springing up around the country—including in Los Angeles. The first open meeting will be held Tuesday, July 19, at 6:30 at 6442 Santa Monica Blvd.