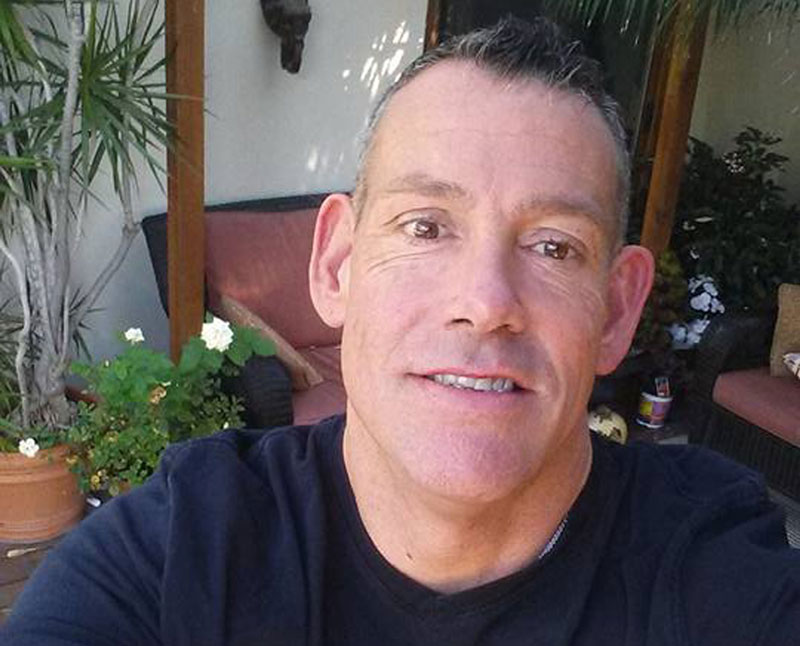 BY TROY MASTERS  |  Nicholas James Bowling, aka Nick James, 28, who lost both legs in 2012 after he crashed a police car he had stolen into a telephone pole on La Brea Avenue at San Vicente, was arrested on July 8, 2016, suspected of killing Frank Rogers, 48.

Bowling has struggled for several years with substance abuse and has lived in a variety of rehabs and sober living homes throughout Los Angeles.  Bowling had most recently been living at an Echo Park Sober Living home at Waterloo and Elsinore Streets where he is said to have strangled Rogers, who was visiting him, during what police called a “domestic dispute.”

An enraged Bowling is said to have overpowered Rogers and locked him into what police describe as a “choke-hold” that he held until Rogers was lifeless.

It is not clear when police were called to the scene.  Bowling was taken into custody by LAPD Northeast at 6pm on July 8 and book on July 9 at 3am.

Rogers, a well known and highly regarded member of Los Angeles’ recovery community, is described as a loving, caring and kind soul. “One of the sweetest kindest souls on earth,” Dulce Harris wrote on Rogers’ Facebook page.

He was known to be a generous mentor and supporter of Bowling.  Acquaintances say they were ‘on again and off again’ boyfriends.

Rogers worked, according to KTLA’s Dave Mecham, “in a sales capacity at a law firm” in Los Angeles.  On his Facebook page, Nick James claims to also work at a law firm.

Bowling is known to be simultaneously irascible and charming.  “He often said he was the most beautiful man in West Hollywood. He thinks the world owes him;  he certainly had a problem with gratitude, especially when his charm worked,” said an acquaintance who asked to remain anonymous. “He uses his disability,” the sources says.

Bowling has a history of violent behavior against his intimate partners and was arrested previously on domestic violence charges in Boone County, Kentucky in June of 2012.

Case in point, a Facebook post Bowling wrote on June 1: “I walked into court this morning on a probation tech violation. Half of me was a lil freaked out, I almost posted wish me luck but I don’t believe in luck, I believe in faith. Everyone had their attorneys and I waived council to see the judge in person. Before I went up I said ‘god let me stay humble and let me be grateful and if I forget to be humble and grateful and lose my way help guide me back so I can fullfill (sic) my destiny in whatever that may be.’ I was out of there in less than 15 min.”

Frank Rogers may have been concerned about his relationship with Bowling.

In his final post on Facebook, on July 2, six days before Bowling allegedly murdered him, he wrote, “The main lesson I took from this year is not every body has a place in your life. If you aren’t getting what you need, and they are getting everything they need….dismiss this from your life…they either lift or drag you, don’t turn a seasonable person, into a lifetime person who sucks you of your joy”