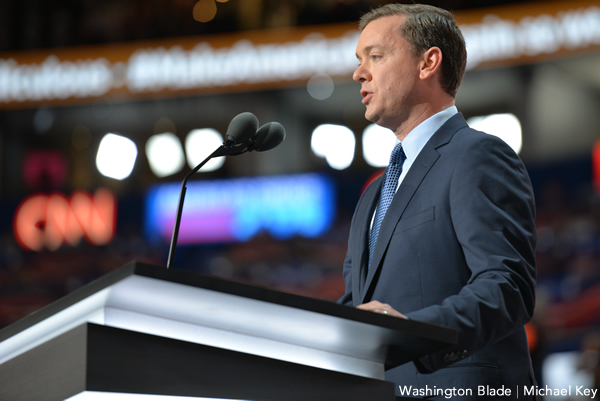 BY CHRIS JOHNSON  | CLEVELAND, for The National Gay Media Association from The Washington Blade  |  Amid attacks on Hillary Clinton’s character and calls for her incarceration, Republicans on the second night of the GOP national convention subtly sought to obtain LGBT support to further their goals.

Sen. Ron Johnson (R-Wis.), who’s defending himself against a challenge from progressive champion and former Sen. Russ Feingold, invoked the Orlando shooting when he recalled provoking Clinton to say, “What difference does it make?” during a Senate hearing on Benghazi.
“It made a difference to the young men and women dancing on a summer night at a club in Orlando,” Johnson said. “And it made a difference to the families watching fireworks at the celebration of freedom by asking a simple question, ‘Why did you not just pick up the phone and call the survivors?’”

Chris Cox, executive director of the NRA Institute for Legislative Action, invoked protection of gay people when he called his organization “the largest and oldest civil rights organization in America.”

“We fight for the rights of all Americans, regardless of race, religion or sexual orientation because the right to protect your life is the most precious right you have,” Cox said.
The remarks stand in contrast to speeches from individuals at Republican National Conventions in years past seeking to build support by demonizing gay people and railing against LGBT rights.
Jason Lindsay, executive director of the Pride Fund to End Gun Violence, said in response to Cox’s remarks the 49 people left dead after the Orlando shooting “no longer have Second Amendment rights, nor do the five Dallas officers gunned down by a weapon of war or the three officers murdered in Baton Rouge.”

“The NRA only protects the bottom line of gun manufacturers, ignoring the majority of Americans who support commonsense gun reforms,” Lindsay said. “Pride Fund to End Gun Violence is standing up to the NRA by supporting candidates committed to reforming our gun laws to make all Americans safer. It is time to take back our public and private places from the threat of gun violence that has proliferated under the NRA’s watch.”

High-profile speakers on the second night of the convention, included Donald Trump, Jr., New Jersey Gov. Chris Christie and conservative commentator and former neurosurgeon Ben Carson.
In the wake of the U.S. Justice Department declining to prosecute Clinton for using a personal email server during her tenure as a secretary of state, Christie’s remarks consisted of recalling Clinton’s actions, and asking delegates if she’s guilty or not guilty. Predictably, each time the audience replied, “Guilty!”

“I am going to be specific so you can render your verdict tonight on the basis of the facts,” Christie said. “Let’s go to North Africa. She was the chief engineer of the disastrous overthrow in Libya. Libya today after Hillary Clinton’s grand strategy, their economy is in ruins, there is death and violence in the streets, and ISIS is dominating that country. Hillary Clinton as a failure for ruining Libya and creating a nest for terrorist activity, answer me now, is she guilty or not guilty?”

Coming off remarks during a breakfast earlier in the day in which he called transgender people an “absurdity,” Carson decried what he called “secular progressivism” changing America.
“The secular progressive agenda is antithetical to the principles of the founding of this nation,” Carson said. “If we continue to allow them to take God out of our lives, God will remove himself from us. We will not be blessed and our nation will go down the tubes.”
Also during the second day of the convention, delegates formally anointed Donald Trump as their Republican presidential nominee through a roll-call vote from each of the state’s delegates. Indiana Gov. Mike Pence was also formally nominated as the Republican Party’s choice for vice president.

Putting Trump over the top to reach the 1,237 votes needed to claim the nomination was the declaration of votes from the delegation from New York, Trump’s home state. Donald Trump, Jr., read the declaration of 89 votes pledged to the Republican presidential nominee from the state.
Representing the delegates on behalf of D.C. was Jose Cunningham, who’s gay and chair of the D.C. Republican Party. In accordance with the results of the primary, Cunningham called 10 votes for Sen. Marco Rubio (R-Fla.) and nine votes for Ohio Gov. John Kasich. However, the chair presiding over the count under party rules called each of the 19 votes for Trump.