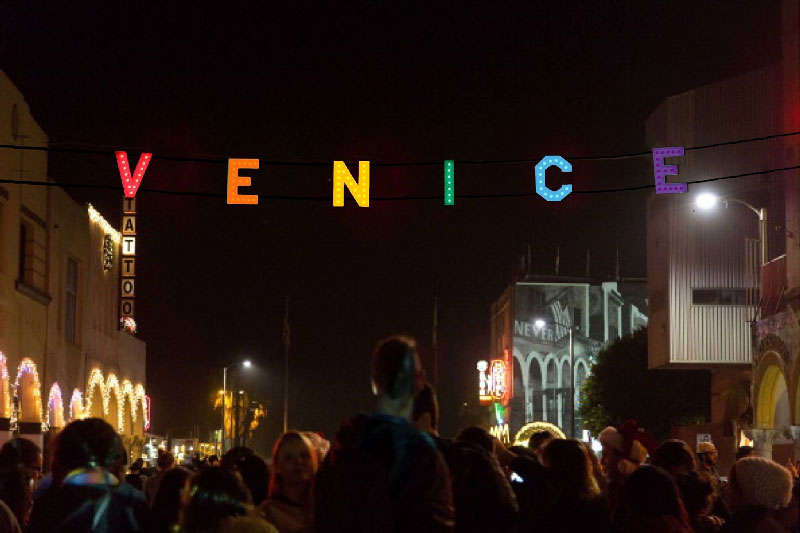 BY MELANIE CAMP  |  On Friday June 3rd Venice will shine out, loud and proud when the famous sign comes alive with rainbow colors to celebrate the first ever Venice PRIDE.

Venice Local Grant Turck was a regular at Roosterfish, “I met one of my boyfriends there. I met one of my best friends, Daniel Samakow…” Samakow is co-owner of the Venice Restaurant James Beach and owner of Danny’s at 23 Windward Ave., Venice. “…I met Danny at the Pac-Man machine and we just became really good friends after that,” says Turck.

Turck says the closing of Roosterfish “was almost as if part of being gay on the West Side was dying.”  Turck tried but failed to save the bar, attempting to tie it to the LA Conservancy focus on preserving the iconic Abbot Kinney Blvd area.  But when that bid failed he decided “looking to the future” was necessary to preserve a gay presence in Venice.

The future is now and includes rainbow cheese toasted sandwiches (yes, it’s a real thing!), a surprise celebrity guest to flick the switch on the rainbow lights on Friday night (Turck and Samakow have a good track record. They wrangled Robert Downey Jr to the job at the holiday sign lighting in 2012), and…well, remembering the past.

With the decision to rename LA Pride the LA Pride Music Festival Turck says people have been worried that “the millennials don’t really care about the history or reason behind why the festival even exists.” For this reason Turck says it is imperative Venice Pride tip its hat to history.

“It’s a really, really important part of any kind of Pride event that you hold. That people understand and have context, especially for young people, is vital. It was only just last year that the US Supreme Court affirmed marriage equality but there was a whole 40 years before that —  a 40 year movement of people fighting every year, day-in-day-out, in Chicago, in Florida, in New York, to try and do individual tiny things to move the needle closer and closer,” he said.

“It took 40 years of effort and fighting to get to that moment. So for some young people it might seem like ‘oh, it was just a snap of the finger and there was marriage equality’ but that is just not the case,” says Turck.

Two snaps.  And a circle.

In another bow to history, Councilmember Mike Bonin will honor his predecessor and mentor, Bill Rosendahl, the first openly gay man elected to the Los Angeles City Council, who recently died.

Rosendahl had a particular love for Venice Beach and Bonin is expected to announce that the beach from Brooks Ave. to Windward Ave. in Venice will be named The Bill Rosendahl Beach in memory of the first openly gay L.A. City Councilmember.

“I am excited and elated to be a part of the first Venice LGBT Pride celebration,” said Councilmember Mike Bonin, who represents Venice and is one of three openly gay elected officials in Los Angeles.

“For more than 100 years, Venice has been known as a place of diversity and tolerance. For decades, it was a home and a safe haven for the gay community, and having a special pride celebration in Venice is long overdue. I am particularly grateful to Grant Turck and Daniel Samakow for conceiving the event, and to George Francisco and so many others who are working with them to make it happen,” he said.

George Francisco, a local film producer, is helping Turck and Samakow organize the event and says, “the Venice Pride Sign Lighting is the first true opportunity for Venice to use its historic sign as a symbol of inclusion and celebrate the spirit of Abbott Kinney by recognizing the basic human rights of the an entire community.”

Truck says Pride events are an important way to remind people that everything the LGBTQ community has fought for is not taken for granted.

“As far as we’ve come in terms of equality — and marriage equality was a big one — the fight continues. There are still people within the community, from transgender workers in the workplace to bi-sexual homeless youth on the boardwalk, that are still facing oppression and discrimination,” says Turck.

With that in mind, Venice Pride also aims to support and raise awareness for The Trevor Project. A leading national organization that provides crisis intervention and suicide prevention services to LGBTQ youth.

While lamenting the doors closing on the last gay bar on the West Side, Turck says he has wondered if it is a sign of the times. “It’s something I’ve definitely thought a lot about and friends and I have talked about that. I think that in some regards that may be the case. That might be part of the reason as to why. I think ultimately Roosterfish closed because they raised the property value but I think there’s this very valid argument, this idea that, do we even need “gay bars” anymore. We should just be able to go to a bar.”

Turck notes that while Los Angeles may be an open and accepting city “there are still pockets across the country where things are not as open or accepting as they are in Venice.” The  rainbow sign is a reminder to everyone to take nothing for granted.

While Venice Pride is about remembering the battles, it is also about celebrating the victories and the party is set to run all weekend.

Venice Pride kicks off on Friday June 3rd under the Venice Sign on Windward & Pacific Ave, Venice Beach.The party starts at 7pm with dancing in the streets and music courtesy of DJ Victor Rodriguez. After the sign lighting and block party, DJ Jason Stemmler will lead the troops at an afterparty kicking off at Danny’s, 23 Windward Ave. On Saturday and Sunday the LGBTQ BEACH party will be happening from 11am each day at the rainbow colored Breakwater Lifeguard Tower #20 on Venice Beach.