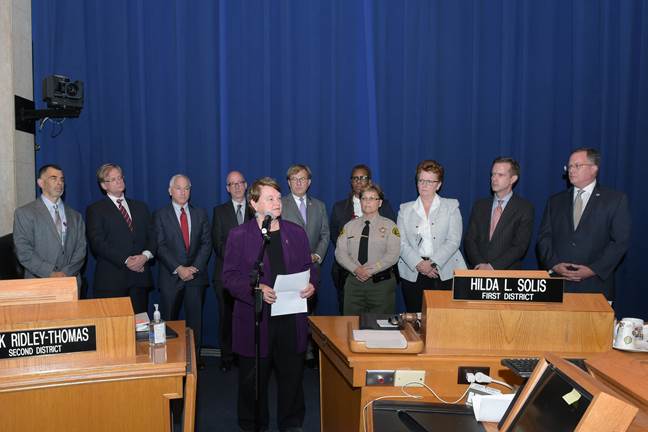 BY KAREN OCAMB  | Out Los Angeles County Supervisor Sheila Kuehl has spent a lifetime fighting bigotry, most prominently perhaps when her Dignity for All Students bill to protect LGBT youth faced a knock-down, drag-out debate in the California Assembly with anti-gay Republicans claiming it was about “special rights,” not civil rights for gays. More recently, Kuehl has advocated for youth in County jails and the foster care system.

So it wasn’t surprising that there were moments when Kuehl seemed to choke upTuesday morning talking about the massacre of 49 mostly young gay Latinos and the wounding of 53 more in the Pulse nightclub in Orlando, Florida last Sunday. After a moment of silence at the beginning of the Board of Supervisors meeting, Kuehl brought up 10 openly LGBT LA County department leaders and four out LGBT members of her staff to ask that everyone re-dedicate their efforts to end bigotry everywhere.

“I’m very proud of the work we’ve done in the County, in the state of California and frankly, in the country, to recognize and try to deal with our inherited hatreds. We breathe them in, as we grow up and we chose to exhale them as we get older. To learn and to grow. As [Supervisor] Hilda [Solis] said, the 50 people who were killed were mostly in their 20s, were almost all Latino or Latina—they went to dance, they went to have fun. Those 50 people didn’t know it was going to be their last dance.

“We hardly ever think about such a thing.  If we did, it would keep us from going anywhere. So we go, in a free country. Because we know, as we used to say and wear on our tee shirts in the AIDS and gay movements, Silence Equals Death. So we are not silent,” Kuehl said.

The supervisor also acknowledged the openly LGBT leaders standing with her, saying she is “grateful to each of them for being out, for being proud, for saying this is who I am.” She also expressed deep gratitude for straight allies, noting that many allies stood in long lines waiting for hours to donate blood in Orlando.