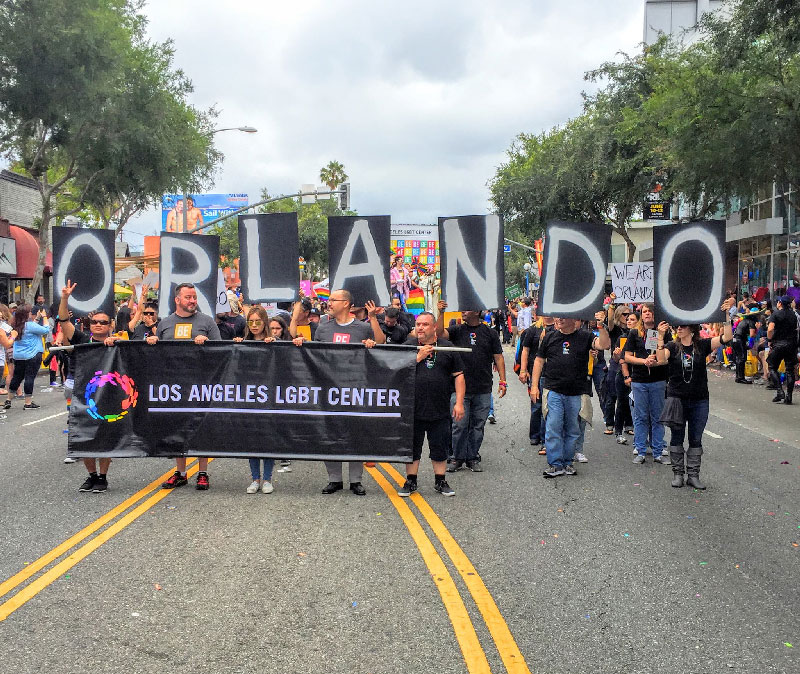 BY TROY MASTERS | Thousands of people are expected to gather at a candlelight vigil and rally in front of Los Angeles City Hall tonight beginning at 7 PM, honoring the 49 dead and dozens more who were wounded in the Sunday morning terror attack on The Pulse nightclub in Orlando, Florida.

In Venice Beach, organizers of Venice Pride are holding a rally at 8:30 PM on Windward Circle.

24 hours after a shooting rampage at the Orlando gay nightclub, a spokesman for the officials provided new information about the police interactions with the shooter.

Orlando’s Mayor, Buddy Dyer, said that all but one of the 49 victims had been identified and that  the grim task of removing the bodies occurred overnight Monday.  Families of 26 victims had been notified.

Orlando Police chief, John Mina, said police had three confrontations with the gunman during the rampage on Sunday morning.

At 2 AM an off-duty officer who was working as a security guard at the nightclub responded when shots rang out in the club.  The officer called for back and other officers arrived, engaging the shooter in a gun battle, Chief Mina said.  The shooter took several hostages and barricaded himself in a bathroom.

“At that time we were able to save and rescue dozens and dozens of people and get them out of the club,” Chief Mina said. A SWAT team was called and took up positions in a bathroom across from where the self-proclaimed agent of Isis was holed up and negotiators were eventually able to communicate with him.

FBI director James Comey said the shooter spoke three times with 911 dispatchers. The assailant made the initial call but hung up, dispatchers called him back and they talked briefly but he hung up, later a third call was made and he spoke more extensively.

“Our negotiators were talking with him,” he said. “And there were no shots at that time but there was talk about bomb vests and explosives. There was an allegiance to the Islamic State.”

While negotiators were communicating with the shooter, police made the decision to attempt a rescue operation and were able to get survivors out of the building, he said.

“Dozens and dozens of people’s lives were saved,” Mina said. “We were able to get people out of the dance floor and out of the lounge area.”

At 5:05 a.m., Mina made the decision to take out an outside wall with an explosive charge. An armored vehicle then pierced a hole in the exterior wall of the bathroom and hostages were able to flee.

The shooter came out with two firearms – a .223 caliber AR type rifle and a 9mm semiautomatic pistol — started shooting at officers and they fired back. He was killed in the gunfight.