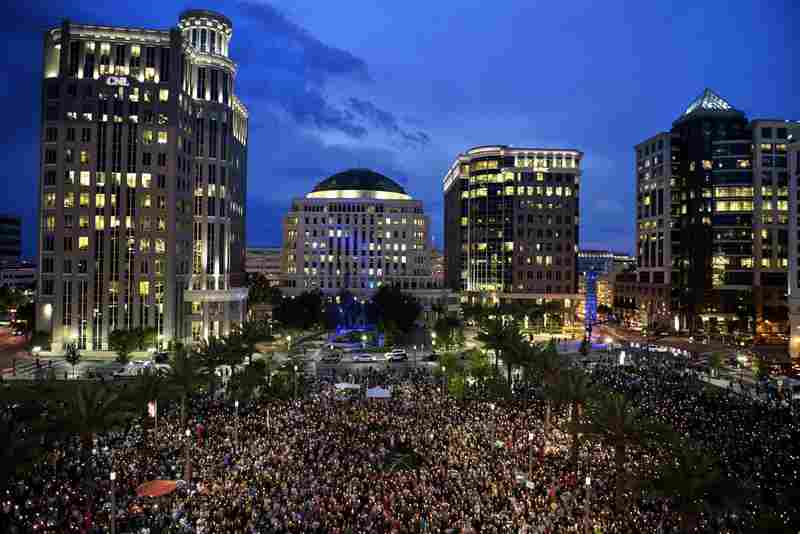 The Ones Who Watch (Full Song) from Troy Masters on Vimeo.

BY TROY MASTERS  | Many of us are still groping in the dark, trying to find a personal way to make sense of the senseless, despite thousands of vigils commemorating the lives of 49 mostly gay latino people who were slaughtered in Orlando.  Music, for some people, plays a vital role.

Billy Pace, 48, a former Los Angeles resident and gay man who wrote and co-produced “Us,” one of the hit songs that was part of Celine Dion’s 1998 blockbuster album ‘Let’s Talk About Love” — an album that won 4 Grammy’s and sold over 31 million copies — has written what is perhaps the definitive anthem for Orlando.

“The Ones Who Watch” is a song that is at once defiant, inspirational and angry, decrying government inaction and calling on the activist spirit that has led every generation of LGBT people out of darkness. But it’s also current, with powerful vocals that soar with emotion and power.

The song surfaces as the the Senate voted down four separate gun measures Monday in the aftermath of the worst mass shooting in modern U.S. history — showing the partisan paralysis over gun control has barely moved on Capitol Hill despite Orlando, enraging people around the country. The Supreme Court has decided to potentially deport millions of immigrant families, mostly latinos.

“I wrote the song with Lady Gaga and Adam Lambert in mind. Each time I see that photo of her at the LA City Hall vigil I burst into tears at what an amazing human being she is,” said Pace.

“This was a labor of therapeutic love for me.  I grew up in Orlando.  When this happened it touched me profoundly and I am still numb,” he said.

Pace, who lives only a few minutes drive from Pulse nightclub in Orlando, hopes to partner with a major artist who will agree to donate proceeds from sale of the song to a youth oriented LGBT non-profit organization.

“The One Who Watches” was a collaborative effort involving some leading music industry creative people in the business.  It is available for download on iTunes and proceeds go to families of the victims through the GLBT Community Center of Central Florida.

Pace is of course not alone in taking his grief and turning it into music.

Young musicians and seasoned superstars alike are turning to song to honor the people who were killed in the attack, with tributes ranging from star-studded covers to heartfelt new creations.

Adele dedicated her entire Antwerp, Belgium, concert to the shooting victims: “The LGBTQ community, they’re like my soulmates since I was really young, so I’m very moved by it,” she told the audience while holding back tears.

Beyoncé performed her song “Halo” at her Detroit concert and dedicted it “to all the family members of those who lost their lives in Florida.”

Keith Urban, a leading country star honored the Pulse victims at a concert near Orlando with a cover of U2’s “One.”

Elton John broke into tears at a concert near Liverpool, during his tribute version of “Candle in the Wind.”

Christina Aguilera dedicated new single “Change” to those affected by the shooting.

Melissa Etheridge released an original new song, “Pulse,” in the wake of the shooting, “based on the incredible, deep sadness and emotion I felt Sunday morning, when I woke up,” she said of the song. “This is for you. This is for everyone. This is for the whole damn human race.”

Billy Joel took to Madison Square Garden and performed “You’re Only Human (Second Wind)” for the first time since 1987 in honor of the 49 lives lost.

Broadway stars came together to record a benefit single of “What the World Needs Now Is Love.”

The New York Philharmonic performed Barber’s poignant “Adagio for Strings” in front of 50,000 people who packed Manhattan’s Central Park, dedicating the concert “not just to the memory of the victims, but to the idea that we are all part of a shared humanity.”

Every LGBT generation, it seems, has experienced a signature event that changed the course of their lives and which became a rallying point for their dignity, their fight for their authentic lives, their civil rights and shaped their generation in ways that impacted all generations.

Orlando will come to have as much meaning as Stonewall and the AIDS Crisis.

Orlando has already changed the course of history. It will inevitably be memorialized by all forms of art.

Music is a natural response.  It has magical powers of expression that allow us to heal, to remember, to mourn and to be empowered. In the wake of Orlando, music plays a critical role in helping to guide us through the darkness, mourning the 49 lives lost.