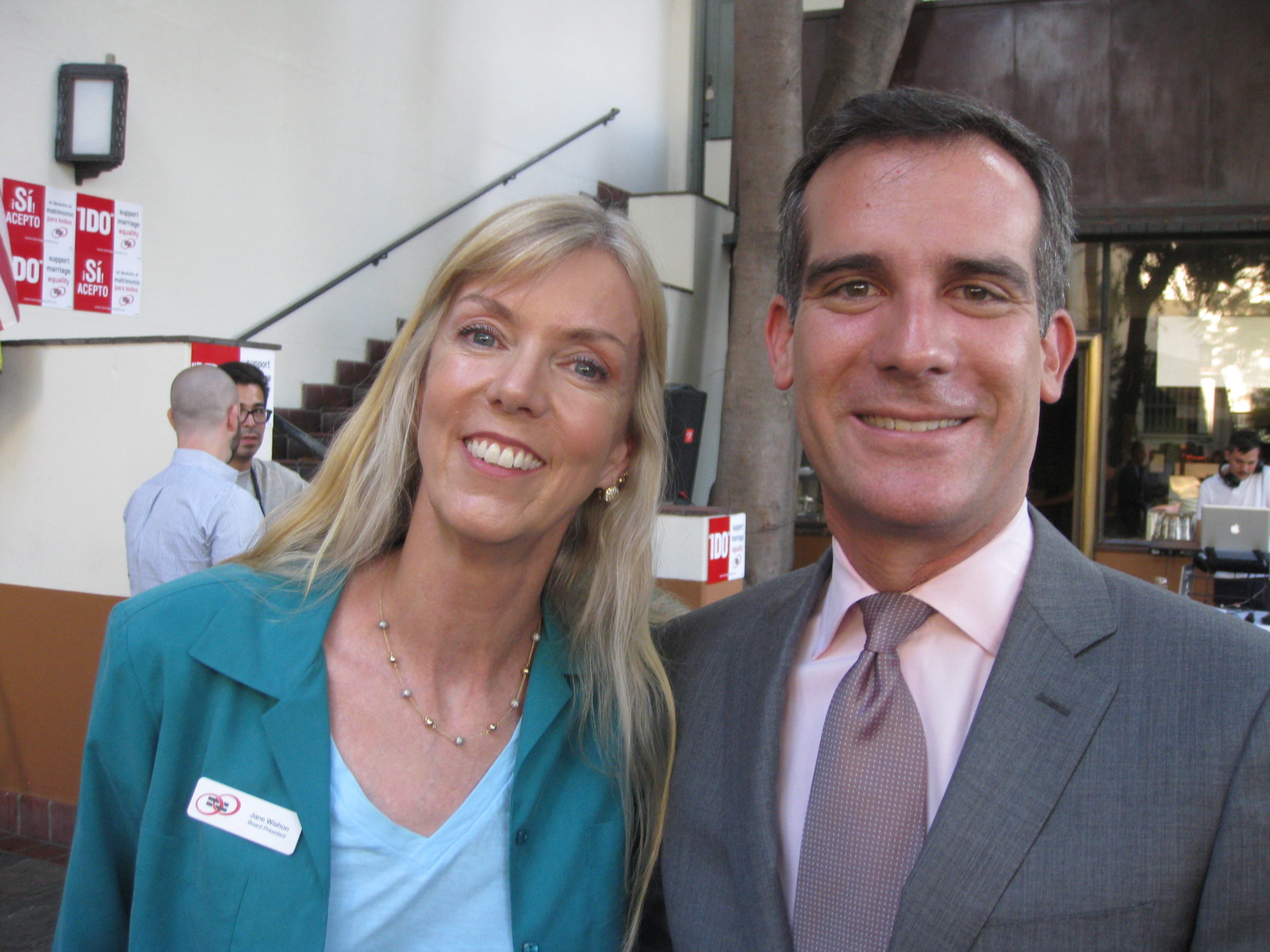 BY KAREN OCAMB  |  Perhaps unbeknownst to many younger LGBT activists,  Stonewall Democratic Club has been a strong grassroots political force helping elect LGBT and allied public officials in Los Angeles for more than 40 years. Those officials have ensured that anti-LGBT discrimination is rooted out and extinguished in every reach of government. And on April 30, Stonewall will honor five key politicos for their pro-equality achievements and as a visceral reminder of the importance of voting in the upcoming June 7 elections.

Garcetti has been affectionately dubbed L.A.’s “hipster” mayor for encouraging “out of the box” thinking and approaches to solving problems. In fact, Garcetti, a close friend of marriage equality hero and Winning Marriage author Marc Solomon, was an LGBT ally long before the community helped elect him to the L.A. city council. As mayor, he has been a strong LGBT advocate, including hiring LGBT staff (out progressive Rick Jacobs is Garcetti’s deputy chief of staff) and standing for LGBT civil rights.  On April 15, for instance, Garcetti enacted a non-essential travel ban to North Carolina and Mississippi in response to the recent anti-LGBT laws in those states. At a news conference, Garcetti said those laws betrayed “the basic rights to equal protection and self expression that all Americans are guaranteed by the Constitution. These bills are thinly veiled as actions to preserve religious freedom or protect against sexual violence, but will instead promote intolerance and discrimination against the LGBT community.”

Last month, Garcetti created a transgender advisory council for the city and on April 18,  he participated in the launch of Transform California, a statewide movement founded by Equality California and the Transgender Law Center to promote respect, understanding and safety for the transgender community that includes a signed pledge to oppose anti-trans discrimination. “California and its residents are known around the world for standing up for the values of tolerance and equality,” Garcetti said. “Trans people should have the freedom to live their lives, to dream, and to plan for the future without worrying about their safety or basic rights. I am proud to add my voice to the broad coalition supporting Transform California, a new step in the march toward full inclusion for our trans brothers and sisters.”

Jeff Prang has been one of the more quietly effective LGBT leaders in the nation. Sworn in as L.A. County Assessor on Dec. 1, 2014, Prang oversees a budget of about $150 million and represents more constituents in L.A. County with its population of 321,418,820 (as of July 2015) than any other openly LGBT elected official in the country. Best known as a ubiquitous West Hollywood city councilmember during his more than 20 years of public service, Prang raised LGBT issues wherever he worked, including as President of the California Contract Cities Association, a statewide education and advocacy organization representing California municipalities. He was also instrumental in encouraging other LGBT politicos to get involved in hyper-local politics and seeking positions on boards and commission, as well as running for public office. Prang has been in a relationship with Ray Vizcarra since 2004, whom he married in 2008 with his close friend L.A. City Councilmember Bill Rosendahl officiating at a small ceremony at West Hollywood City Hall.

Rosendahl, the beloved longtime out politico and media executive, died of cancer on March 30 at age 70, will also be honored. Stonewall created the new “Bill Rosendahl Courage Award” to be “given to individuals who, in accordance with their conscience, stand true to themselves, despite any risks to their career or reputation.”  The first award will be given posthumously to Rosendahl.

Also honored will be Denise L. Eger, an ordained out Rabbi since 1988 and founder of the progressive Reform Congregation Kol Ami in West Hollywood.  Eger’s practice of her faith is rooted in social justice activism, often joining Rev. Troy Perry, founder of the Metropolitan Community Church, and the late icon Episcopal Rev. Malcolm Boyd on the frontlines of LGBT and AIDS protests or public policy discussions. Eger has an extensive list of awards and “firsts,” including essentially bringing LGBT issues to the forefront of the Jewish Reform movement. In March 2015, Eger became the 60th President of the Central Conference of American Rabbis, the largest organization of Rabbis with more than 2000 Reform rabbis worldwide—the first LGBT person to hold that position.

Jane Wishon, a longtime member of Stonewall, is the kind of dream ally every minority might wish for. A socially conscious straight activist who matches her words with actions, Wishon has been Marriage Equality USA’s L.A. leader for years, concentrating on coalition building to right the wrong of inequality. Married for 34 years with three children, she is also an Elder of the Presbyterian Church. But Wishon brings smarts to her volunteer activism, as well, applying that MBA she earned as a Baker Fellow at the Anderson School of Management UCLA.