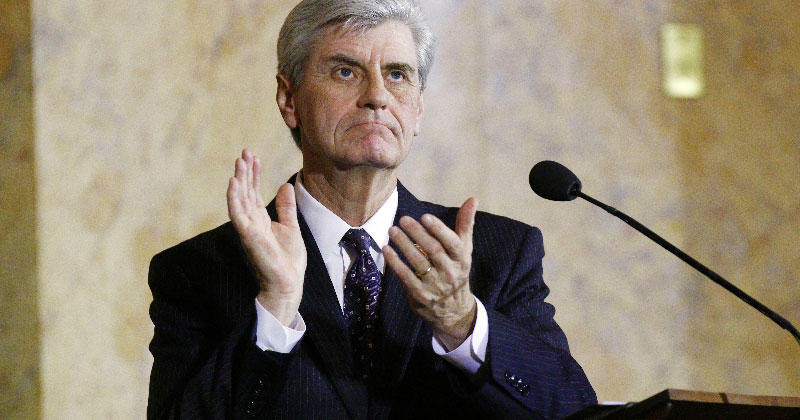 BY STAFF  |  Mississippi Governor Phil Bryant, who has a gay son, has signed a bill into law that allows religious groups and private businesses to refuse service to gay couples based on religious beliefs.

The measure clears the way for employers to impose their religious beliefs in implementing workplace policies, hiring, dress code, grooming and bathroom and locker access. It even allows real estate companies to deny housing based on sexual orientation and perceived gender.

Mississippi is latest state to draw national attention for passage of anti-LGBT laws. North Carolina recently barred transgender people from choosing bathrooms consistent with their gender identity and also prohibited its municipalities from enacting measures that would protect LGBT people.

Mississippi’s governor signed House Bill 1523 into law despite universal opposition from gay-rights groups and many major businesses who say it is outright discrimination.

The law aims to protect the rights of those who believe marriage should be only between one man and one woman, that sexual relations should only take place inside such marriages, and that male and female genders are unchangeable.

“This bill merely reinforces the rights which currently exist to the exercise of religious freedom as stated in the First Amendment to the U.S. Constitution,” the state’s Republican governor wrote in a statement posted on Twitter.

The law allows churches, religious charities and privately held businesses to decline services to people whose lifestyles they say violate their religious beliefs. Individual government employees may opt out of facilitating services and programs for LGBT people, although the measure says governments must still provide services.

“This bill does not limit any constitutionally protected rights or actions of any citizen of this state under federal or state laws,” Bryant said. “It does not attempt to challenge federal laws, even those which are in conflict with the Mississippi Constitution, as the Legislature recognizes the prominence of federal law in such limited circumstances.”

Bryant signed the measure into law within hours of receiving the bill.  Only days before the Supreme Court of the United States rebuked a Mississippi law that prohibited LGBT people from adopting children.

“This bill flies in the face of the basic American principles of fairness, justice and equality and will not protect anyone’s religious liberty,” Jennifer Riley-Collins, Executive Director of the American Civil Liberties Union of Mississippi, said in a statement. “Far from protecting anyone from ‘government discrimination’ as the bill claims, it is an attack on the citizens of our state, and it will serve as the Magnolia State’s badge of shame.”

“This is a sad day for the state of Mississippi and for the thousands of Mississippians who can now be turned away from businesses, refused marriage licenses, or denied housing, essential services and needed care based on who they are,” she said.

The ACLU, which is involved in a federal lawsuit challenging a similar law in North Carolina, said it was considering strategy in Mississippi.

Private sector businesses have pushed back against such legislation elsewhere;  the North Carolina law was almost immediately opposed by Apple Inc, Twitter Inc, Pay Pal, Amazon, Well Fargo, Alphabet Inc and dozens of other high-profile corporations with interests in that state.

On Tuesday, PayPal Holdings Inc, for example, canceled plans to open a global operations center in Charlotte, North Carolina and will withhold an investment of $3.6 million locally the discriminatory law..

More than two-thirds of Mississippi residents and voters support the law, according to the Family Research Council, an influential Christian lobbying group.

“This new law gives fresh momentum to efforts on the federal and state level to stop government discrimination against people who believe that marriage is between a man and a woman,” its president, Tony Perkins, said in a statement.

“Under this new law, religion could be used by any individual or organization to justify discrimination against LGBT people, single mothers, unwed couples and others.  Tax-payer funded faith-based organizations could: refuse to recognize the marriages of same-sex couples for provision of critical services including emergency shelter; deny children in need of loving homes placement with LGBT families including the child’s own family member; and refuse to sell or rent a for-profit home to an LGBT person — even if the organization receives government funding. It would also give foster families the freedom to subject an LGBTQ child to the dangerous practice of “conversion therapy,” and subject a pregnant unwed girl to abuse, without fear of government intervention or license suspension. It would even allow individuals to refuse to carry out the terms of a state contract for the provision of counseling services to all eligible individuals, including veterans, based on the counselor’s beliefs about LGBT people or single mothers.”

Schools, employers, and service providers in Mississippi can now refuse transgender people access to appropriate sex-segregated facilities consistent with their gender identity — all in direct conflict with the U.S. Department of Justice’s enforcement of federal law. HB 1523 even legalizes Kim Davis-style discrimination by allowing government employees to abdicate their duties and refuse to license or solemnize marriages for LGBT people.

Mississippi’s HB 1523 is the third stand-alone anti-LGBT bill signed in law in 2016.