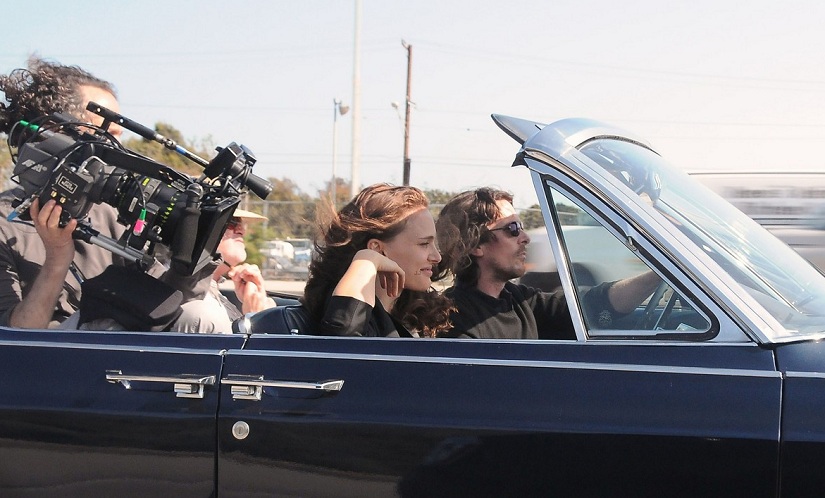 BY STEVEN ERICKSON  |  A “La Dolce Vita” for the era of YouTube, director Terrence Malick’s “Knight of Cups” is likely to have speculators deciding it’s either a masterpiece or complete crap.

That’s the polarizing direction in which Malick has recently been moving. His first four films received near-universal acclaim, probably aided by the 20-year gap between the 1978 “Days of Heaven” and 1998 “The Thin Red Line.” “Tree of Life” and “To The Wonder” reaped a much less widely enthusiastic response, with critic Robert Koehler offering an eloquent putdown in an article in “Cineaste” magazine.

It didn’t help that by that point, Malick’s style, particularly his signature image of a woman twirling through wheat fields, had been copied by other filmmakers and advertising directors, but he didn’t seem to notice. For me, “Knight of Cups” is the most rewarding late Malick film, even if it works mostly as eye candy.

Malick also ventures from L.A. to Las Vegas, driving along the desert via the freeway in sped-up images. Along the way, he goes to an enormous party, hangs out at fashion shoots and movie sets, and parties at strip clubs, but only at the end of the film does he reach any kind of peace with himself.

There’s very little dialogue in “Knight of Cups.” Instead, Malick has replaced it with a voice-over that passes from character to character. The voice-over of “The Thin Red Line,” which functioned similarly, bothered me at first because every character’s thoughts sounded identical and their philosophical musings didn’t ring true as the ideas of uneducated 20-year-olds.

It took me a few viewings to realize that such literal verisimilitude was the last thing on Malick’s mind. Few people will have that problem with “Knight of Cups,” which also does a much better job of differentiating each character’s voice.

“Knight of Cups” stakes out the controversial position that nature is a better balm for the soul than nightclubs. It’s funny how many films about the evils of Hollywood devote more time to its wild parties and three-way sex than its casual racism. But even if Fellini said all this back in 1960, “Knight of Cups” is very much a film of the ADHD-addled present and benefits from its modernity.

You could take almost any minute-long stretch, put it on YouTube and have a chance at creating a viral video. I’m particularly fond of the scene of a dog swimming after its toy, shot from an underwater camera. Malick and cinematographer Emmanuel Lubezki’s camera angle choices are consistently odd.

The voice-over switches so quickly that it can be hard to keep track of who’s speaking, especially towards the beginning. The editing isn’t as radical as an avant-garde film like Isiah Medina’s “88:88,” which chops up philosophy, hip-hop lyrics and images of poverty in Toronto, but it comes close. Malick proves himself again one of the most adventurous narrative filmmakers in the U.S.

The details of that adventure are sometimes vague. Malick’s scenes of Hollywood decadence often play like a PG-13 Bret Easton Ellis parody. He’s never been credited as a social realist, but the brief images of burned homeless men are much more bracing, probably because the men aren’t actors. (It’s distracting to have Antonio Banderas show up at a party, spout a bunch of gibberish for two minutes, and then vanish from the film.)

A practicing Christian, Malick throws in several references to his faith, such as a scene where Rick’s father Joseph  (Brian Dennehy) prays on his knees, but the film is suffused with a general sense of spirituality that’s as open to tarot cards and statues of Hindu gods as Jesus. One gets the sense that Malick keeps his films’ religious options open  because he risks pissing off the arthouse audience by getting too specific.

“Knight of Cups” is designed as a modern-day “Pilgrim’s Progress”, and its glamorous setting tends to work against it, as does the fact that its six female characters enter and exit the film so quickly that we never really get a chance to know them. But if there’s one thing Malick does know, it’s how to seduce his audience with images.

Almost all the urban and rural landscapes through Rick travels look immensely appealing, at least at first glance. And Malick resists the urge to have women cavort through grain! Formally, his work is growing more complex and more engaged with the world around us.  I just wish its content was keeping pace.