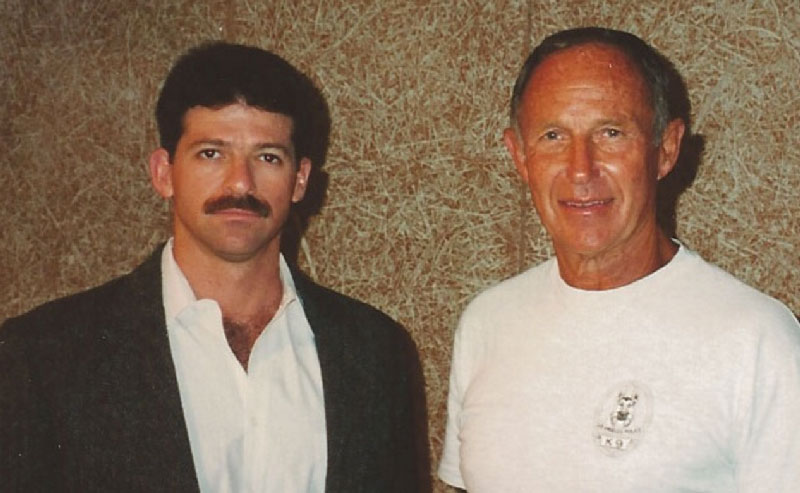 BY KAREN OCAMB  |   UPDATE: Sgt. Mitch Grobeson, a nationally prominent LGBT figure who battled institutionalized homophobia within the ranks of the LAPD, is accused of “pointing a handgun at his spouse to force him to leave their home” following a domestic dispute last Thursday.  The victim contacted LASD to help him get some belongings the next day.  Deputy District Attorney Jessica Kronstadt has announced the charges against the openly gay former LAPD today.

Kronstadt is asking for bail to be set at $100,000 and for a criminal protective order for Grobeson’s spouse. Grobeson faces a possible maximum penalty of 14 years in state prison if convicted.

Grobeson’s incarceration could inadvertently prove to be a significant test of the jail reforms put in place after a settlement with federal prosecutors last August.  Despite the bad blood between old school law enforcement officers and the openly gay former sergeant after Grobeson exposed homophobia in the LAPD ranks in 1988, the county is now responsible for the safety of the one-time gay icon while he’s in custody.

Grobeson’s arrest stems from an incident last Friday afternoon, March 4, when the LASD was called to a domestic violence incident on the block of 800 West Knoll Dr. in West Hollywood. The Sheriff’s office deployed SWAT, a crisis negotiating team, the bomb squad and a helicopter after it was reported that Grobeson, 57, had threatened his spouse Oscar with a gun, was making wild suicidal threats and had multiple guns in the house, according to West Hollywood Sheriff’s station spokesperson Sgt. Jeff Bishop.

The couple has been together for 12 years without any public incident and both Grobeson and his spouse are considered very “neighborly.” The domestic disturbance began Thursday night, a source said, when the couple fought so intensely, Oscar was forced to sleep in the car.  According to  a reliable source close to the couple, Grobeson had a “meltdown,” though LASD has not released any information regarding a motive behind the incident.

James Mason, Grobeson’s out next door neighbor, believes Grobeson broke down as a result of a series of mental health stress-related issues centered around his not being able to get a law enforcement job since he left the LAPD under sour circumstances. “It just basically rode on him to the point it became too much for him,” Mason told The Pride, adding that Grobeson repeatedly applied for law enforcement positions but was denied because of his history with the LAPD.  “That stressed him out.”

Grobeson has served as a security guard for celebrities ranging from Carol Channing to Selma Gomez and has taught security courses over the years.

Grobeson’s original lawsuit in 1988 resulted from horrific harassment from fellow officers, including failure to provide backup, leaving Grobeson stranded in a dangerous situation. His lawsuit exposed homophobia within the LAPD, which his attorney, Jon Davidson, brought to the attention of the independent Christopher Commission in 1991, which investigated the LAPD in-depth. In addition to looking at the hiring, firing and harassment of lesbian and gay officers, the Commission found that officers held homophobic bias toward LGBT citizens. For instance, when dispatch called about a gay domestic violence incident, it was logged into mobile transmission devices at “NHI,” which is code for “No Human Involved.” Grobeson’s 25-year confrontation with the LAPD finally ended in 2013.

Grobeson faces a possible maximum penalty of 14 years in state prison if convicted.

“I am sorry to hear of Mitch Grobeson’s arrest,” Davidson told The Pride via email from Massachusetts. “The LGBT community owes much to Sgt. Grobeson.  As a result of his tireless efforts, including suing the LAPD more than once, numerous reforms were brought about in the Department’s hiring, personnel, and policing practices affecting our community and others.  He also consulted with law enforcement authorities nationwide in efforts to create better educated and trained forces that treat LGBT people equally and more fairly.”

One neighbor felt that the response to the domestic violence incident was “an over reaction,” with SWAT failing to take into account the distress of elderly people trying to get into their HUD building for six hours. “It was a real disruption to the neighborhood,” said the neighbor, who asked for anonymity.

Mason said Grobeson has lived in his apartment for 25 years and they have been neighbors since 1992. Grobeson and Oscar have been together for 12 years and Mason said he has never heard a similar fight. “I was totally shocked,” Mason said. He described Oscar as “incredible, wonderful, loving, compassionate and an absolutely beautiful person.”

Mason described Grobeson as an “awesome human being” who would “give you the shirt off his back and his last dollar.” The action that took place Thursday night and Friday afternoon “is not the Mitch Grobeson I know. He would never have done something like this. He truly must have been having a breakdown of some sort.”

Mason noted that Grobeson had nine registered guns and a “nice collection” of knives used for martial arts, which were featured almost “as art pieces” hung prominently on his walls. He said the police planned to storm the apartment, if necessary. The reason the standoff took so long, Mason said, is because Grobeson “refused to lay in the middle of the street, with everyone watching, as they put the handcuffs on him. He didn’t want to be humiliated.” However, the crisis negotiating team insisted that Grobeson be treated like any other suspect. Mason, who was at the Command Post, said he finally convinced the negotiators to allow Grobeson to come out with his hands up, wearing only shorts and a tee shirt, and promised he would then comply with being arrested.  “All he wanted was respect,” Mason said.

Mason said he does not think drugs played any role in the incident “whatsoever” since Grobeson has always been into fitness. That is also why he does not think Grobeson was suicidal. “I talked to Mitch several times and at no time did he ever mention ‘suicide-by-cop,’” which was a motive being tossed around early on. “That doesn’t sound like something he would do.”

An investigation into what happened on March 4 is ongoing, with Oscar safe at home. But Grobeson might not be so safe in jail. When the initial story about the incident first came out last week, the LASD did not release the suspect’s name. Bishop said he does not know why Grobeson’s name was withheld but said that he received no calls after the incident until The Pride called the West Hollywood station on Monday to confirm that the suspect was Grobeson. Shortly thereafter, an odd “press release” allegedly from a gay deputy at the West Hollywood station, alerted local media to Grobeson as the suspect. That triggered an avalanche of calls and stories.

Bishop said he was unaware of the anonymous press release—that also identifies Grobson’s spouse as “Oscar”—and said that release of a suspect’s name “depends on the situation.” One particular line from the press release suggests a predisposed bias against Grobeson: “As an armed and dangerous man the LGBT community should know about this since Grobeson volunteers as an “armed security guard” at many LGBT fundraising events and has a guard card.”

Bishop said he is unaware of Grobeson being placed on any mental health hold but noted that there is a LASD policy about cops in custody. “I don’t know where and how he is being housed,” Bishop said. “I do know that, if, in fact, he is a former police officer, there are policies that guide us on how to treat a police officer housed in custody.”

Grobeson is in Men’s Central Jail.

This is a developing story.  Please return to this url for updates.

The City of West Hollywood is getting the word out that Los Angeles County has announced it will be issuing...

From Nov. 30th – Dec. 6th, Los Angeles County will participate in its inaugural “United Against Hate Week.” The week-long...

With so many LGBTQ businesses closing due to financial strain from the COVID-19 pandemic, TOA Waters opened this fall, offering...

In a day and age where representation matters Tubi, a free streaming service, is currently offering a premium selection of...

As California surpassed one million COVID-19 cases as the rate of infections continued to rise across the country, Los Angeles...

The newest game and seventeenth installment of the Call Of Duty series, Call Of Duty: Black Ops Cold War, a...

Legendary pop princess Britney Spears has been in a long and drawn out court battle to remove her father, James...