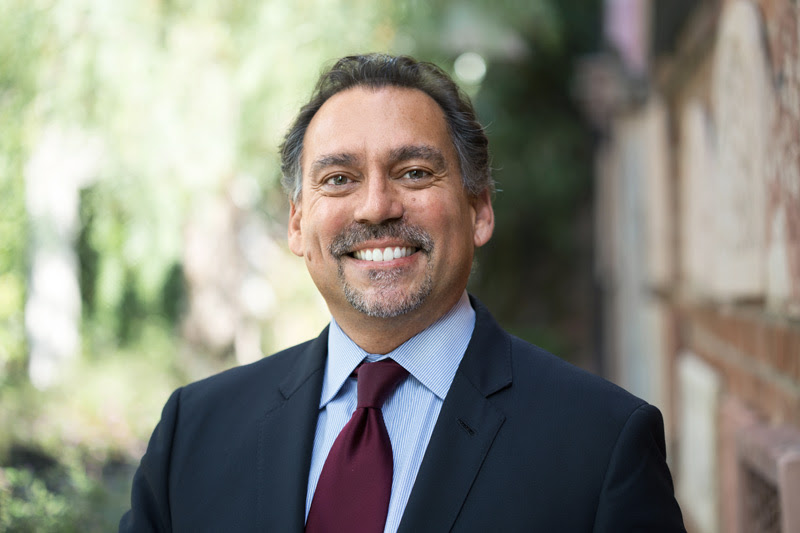 BY T. S. LEONARD & DAVID EHRENSTEIN  |  Mark Morales, recently appointed President of the Los Angeles Gay and Lesbian Chamber of Commerce, wears a lot of hats. It’s a good look for the leader of the Chamber he’s steering, because members of the LAGLCC—minority business owners—are, by nature, varied hat wearers themselves. To be an entrepreneur of any stripe requires a near-athletic degree of versatility; to do it as an unsupported minority can present an even greater, and often lonelier, challenge.

But using identity and diversity to a financial advantage is Mark Morales’ specialty. As the Vice President of the SBA division of HomeStreet Bank, he has spent nearly 20 years consulting financing with small businesses. He is an appointed member of the California Department of Insurance diversity task force. He pitches in to help husband Michael Mirch run their Asian antique importer, Charles Jacobsen.

His many varied professional capacities provide plenty of a-ha moments for Morales about best business practices, informing the seasoned and assertive leadership he brings to the Chamber. “We have very specific goals,” Morales says. “We plan on growing the Chamber by 20 percent. We are trying to certify everyone within our membership that would benefit from it.”

That certification process is key. The LA Chamber is one local contingent that works within the much-larger National Gay and Lesbian Chamber of Commerce. The nationwide organization has its own certification status. Morales has a vision of working deliberately to interconnect businesses within the LA area that will ultimately draw lines across a national playing field.

“Part of our mission is connecting large companies to the LGBT suppliers,” he explains. “It’s all about relationships, and those relationships are created on the local level with [us].”

The usefulness of linking large corporations to LGBT suppliers was another one of Morales’ a-ha moments, from his experiences attending big business events as a representative of the Diversity Task Force. His work with the California Department of Insurance has been a continuing inspiration for rallying action amongst the Chamber.

“The first year I attended the [California Department of Insurance’s] Diversity Summit, there were three LGBT businesses represented there,” Morales explains, excitedly. “The following year in Sacramento, there were 22. Fully a quarter of the audience were LGBT businesses, and most of them were from Southern California, trained by me to be in those seats in front of those insurance companies. A 700 percent increase. All it took was one person talking about it for a year.”

Meeting Mark Morales, it’s no surprise he could drum up such support by simple word-of-mouth. Morales is a talker, but a quick one, an efficient one. It’s no surprise, given his busy professional calendar, that the word “hyperactive” comes to mind. He networks with seamless agility, able to caption one businesses’ operation to another in seconds, and determine how the two could help one another in just a few more.

This social character has seeped down through the ranks of the LAGLCC. At a recent networking event on the Sunset Strip, there were suited attorneys dishing furniture trends with interior designers. Publicists were talking politics with small non-profit leaders. Like any networking event, there were plenty of handshakes and elevator pitches floating around the bar. But the LAGLCC feels unique for its internally plural character.

The directory of registered businesses boasts a wide array of diversity within the community. There are recognizable names that run the gamut from Fresh Brothers to Morgan Stanley. And in between pizza and finance, there are delegates from real estate to restaurants to major media outlets. Brought together by their common minority identity, this rag-tag roundup of businesses big and small builds a collective community of support.

“As much as I’d like to say it’s what you know,” Morales explains, “it’s who you know—connecting—and the relationships you create.”

The ever-multiplying membership of the Chamber is remarkable. When the organization began in 1979, as the Valley Business Association, it was only a handful of entrepreneurs, rallying together in reaction to the just-defeated Proposition 6—the proposed statewide ban on gays and lesbians working in California public schools. Long gone are the days that business owned by and catering to the LGBT community feel the need to present their allegiances carefully. For the Chamber today, the point is visibility.

“It’s like this: here’s a list of 300 large corporations,” Morales explains. “Do you do business with any of these companies? Good! Then it benefits you to get certified, because that opens the doors to do business with the others.”

In its almost 40-year history, the LAGLCC has helped open many doors in the Southern California business world. Going forward, Morales is palpably giddy to see how that effect can be multiplied as it is applied across LGBT businesses and suppliers. His energy has been infectious, and the future of the Chamber seems assured to be a proactive, and possibly, hyperactive, one.