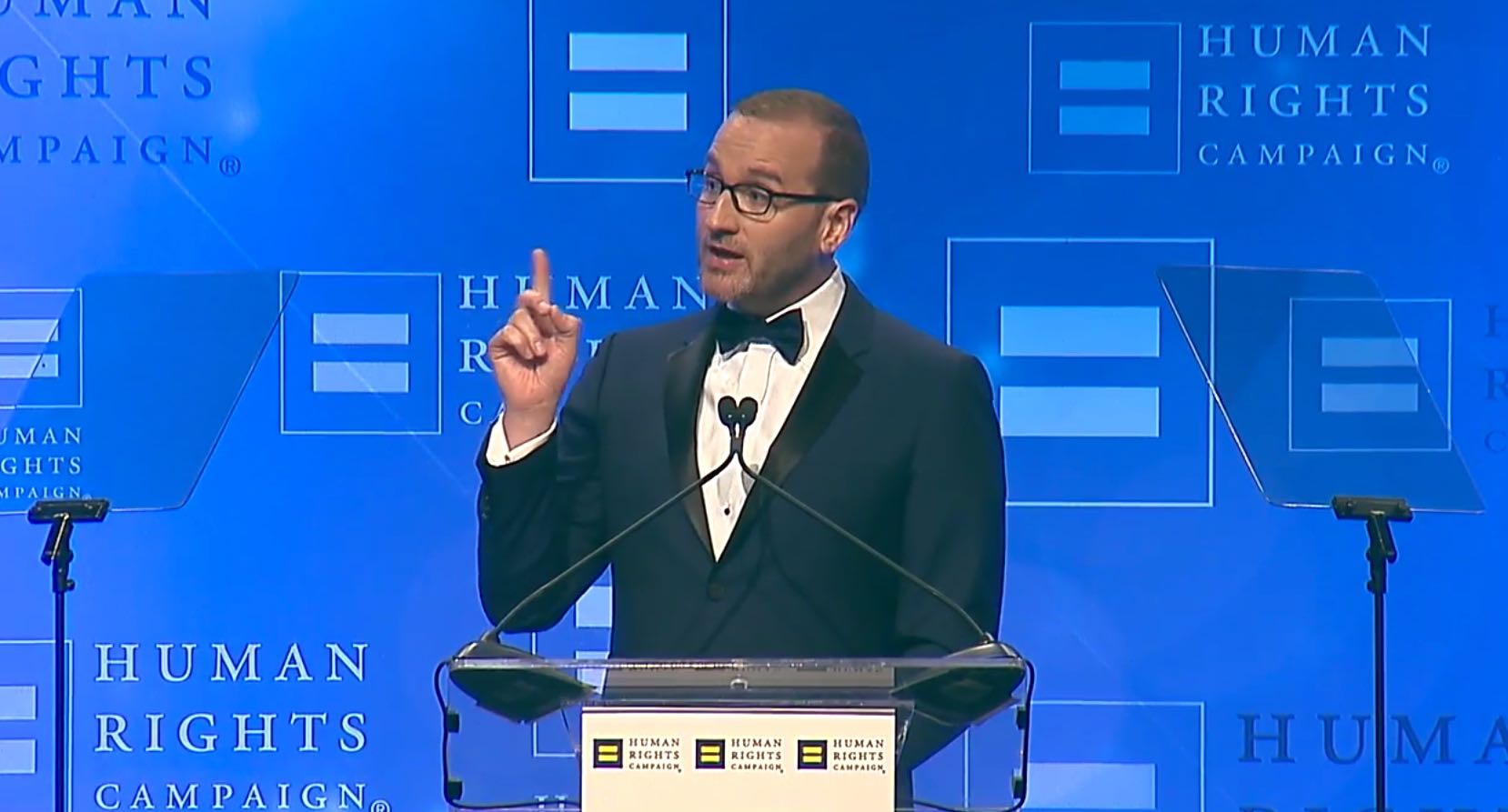 BY KAREN OCAMB  |  In every word, Human Rights Campaign President Chad Griffin packs the know-how of a successful Los Angeles-based political consultant infused with the emotional energy of fighting for a righteous cause: the liberation of LGBT people from the shackles of discrimination and securing full equality now.  Griffin has planted the HRC flag in the national and international marriage equality effort, Hillary Clinton’s presidential campaign, the halls of Congress calling on the Senate to #DoYourJob in granting a hearing for President Obama’s nominee to the Supreme Court, and pressuring business leaders such as Apple’s out CEO Tim Cook to threaten anti-LGBT states with financial ruin if they enact so-called “religious liberty” bills.

And no one, not even his Hollywood friends, are immune from his friendly but intense lobbying.

On March 19, Griffin told an audience of about 1,000 at HRC’s L.A. Gala about the pressure being put on Georgia Gov. Nathan Deal to veto a “license to discriminate” bill similar to Indiana’s Religious Freedom Restoration Act that is now sitting on Deal’s desk.  The bill would allow religious organizations the right to refuse to hire or retain LGBT employees and would deny use of facilities for any event they find “objectionable,” based on religious beliefs or practices.

Griffin noted that the NFL threatened Georgia’s hope to host the Super Bowl if Deal signed the bill. “NFL policies emphasize tolerance and inclusiveness, and prohibit discrimination based on age, gender, race, religion, sexual orientation, or any other improper standard,” NFL spokesperson Brian McCarthy said in a statement. “Whether the laws and regulations of a state and local community are consistent with these policies would be one of many factors NFL owners may use to evaluate potential Super Bowl host sites.”

A coalition of several hundred businesses under the umbrella Georgia Prospers has also called on Deal to veto the bill or suffer a loss of business. The coalition includes several Fortune 500 corporations such as AIG, Apple, Bank of America, Coca-Cola, Google, Home Depot, Honeywell, IBM, Marriott, Microsoft, Salesforce, UPS, Verizon and Wells Fargo.

With HRC honoring the FOX TV hit “Empire” and successful out producer Nina Jacobson at the Gala, Griffin explained to Hollywood’s business leaders that Georgia is now the third largest state for film production, behind California and New York, according to a 2014 report by the FilmLA research firm. And according to state records, Georgia racked in $1.7 billion in spending from at least 248 film and television productions shot in fiscal 2015, with more than 100 new businesses relocating or expanding. That’s way up from $132.5 million in 2007.

“I know we have many entertainment industry leaders in the room tonight,” Griffin said. “Like other states, Georgia offers tax incentives for TV and film productions, and as a result, the entertainment industry has a huge economic footprint in the state. But if this bill is signed into law, your employees, your contractors — all those working on your production are at risk of state-sanctioned discrimination. That is wrong. It’s un-American. It’s an affront on all the values Hollywood prides itself on. And you have the influence and the opportunity to not only defeat this bill, but to send a message that there are consequences to passing dangerous and hateful laws like this. And so tonight, we’re asking you to join us as we urge TV and film studios, directors and producers, to commit to locating no further productions in the state of Georgia if this bill becomes law.”

Variety’s Ted Johnson notes that Georgia serves as a backdrop for TV shows such as “Vampire Diaries” and “The Walking Dead” and has become “a production hub for mega-budget tentpole pictures. Marvel’s “Guardians of the Galaxy 2” is shooting at Pinewood Studios, and “Captain America: Civil War” shot there last summer.”

“Empire” co-creator Lee Daniels and Bravo’s Andy Cohen are just two of the out producers who would face enormous pressure from HRC and the LGBT community if Deal signs the bill. Daniels is rumored to have a new Fox show based in Georgia and Cohen’s “The Real Housewives of Atlanta” is a key show in the Housewives franchise.

Other entities will also face political pressure. Producer Tyler Perry has studios in Georgia for his movie and TV empire. Atlanta-based CNN’s gay anchors Anderson Cooper and Don Lemon will undoubtedly have to comment on behalf of themselves and their LGBT colleagues. And the U.S. government’s Centers for Disease Control, also based in Atlanta, could face having LGBT employees fighting against HIV stigma by day and facing discrimination once they leave work at night. Would the Justice Department then intervene? And if so, how?

Gov. Deal has until May 3 to sign or veto the anti-LGBT bill.