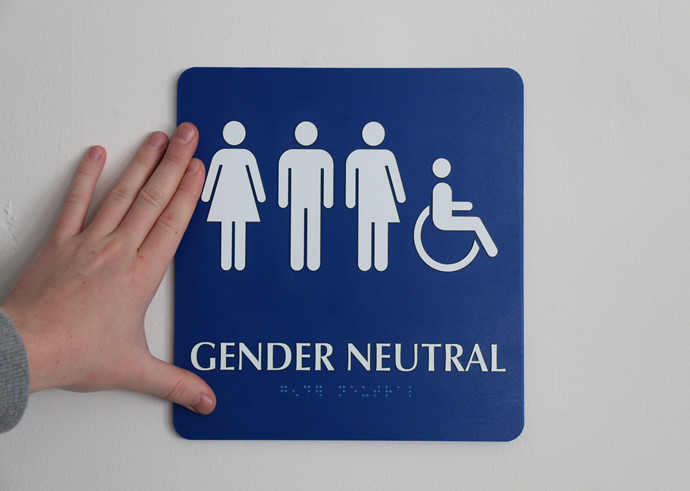 BY SETH HEMMELGARN  |  A bill to designate all single-user restrooms in California businesses, government buildings, and public spaces as “all gender” is being proposed by Assemblyman Phil Ting (D-San Francisco).

The bill is about “convenience, fairness, and frankly, safety,” Ting said at a news conference Friday, January 29, the day after he introduced Assembly Bill 1732.

The issue has become mainstream in recent months as people have expressed concern about transgender people facing harassment when they use public bathrooms that don’t match their perceived gender. The obsession over bathrooms helped doom a non-discrimination ordinance in Houston last November when opponents focused the debate on trans people using restrooms.

There’s a need to ensure “every community feels it has access,” Ting, a straight ally, said, adding, “Nobody should need to use the bathroom and not feel safe.”

He said he’s “proud to be part of a state that wants to take leadership and show the way rather than follow.”

Gay San Francisco Supervisor David Campos recently introduced a similar proposal locally, and such laws are also appearing in Oakland and other cities.

Assemblyman David Chiu (D-San Francisco), AB 1732’s principal co-author, said anti-LGBT policies, including those aimed at restricting which restrooms transgender and gender non-conforming people may use, “stem from a core of fear, hate, and ignorance.”

The statewide LGBT advocacy group Equality California is one of the organizations backing the proposal.

EQCA Executive Director Rick Zbur said trans and gender-non-conforming people have been “intimidated, harassed, and threatened” when trying to use multi-stall restrooms, and the bill addresses “a civil rights issue that affects their ability to fully participate in our communities.”

Kris Hayashi is the executive director of the Transgender Law Center, which is also backing AB 1732.

In Ting’s news release, Hayashi said, “All Californians should have the same freedom to participate in public life, go about their day, and use the bathroom when they need it. By making single-user restrooms accessible to all genders, this law will make life easier for everyone and reduce the harassment regularly experienced by transgender people and others who don’t match people’s stereotypes of what it looks like to be a man or a woman.”

At the news conference, Zbur said the bill would also be helpful to opposite-sex caretakers and others.

Ting said “bathrooms are something we use every day,” and as the father of two daughters, he’s been faced with the dilemma of trying to figure out which bathroom to use when he’s out with them.

“My favorite bathrooms are the ones that say ‘family bathroom,'” he said.

Other supporters of the legislation also spoke Friday.

Summer Lowen, of the National Organization for Women’s San Francisco chapter, said among other problems, women’s rooms are often farther away than men’s rooms.

“Segregated facilities are not meeting our needs,” Lowen said.

“Single-occupancy restroom access should not be an issue for anyone” who’s visiting a restaurant, bar, or other establishment.

Ting said he and other supporters are “very optimistic” about his bill becoming law, noting that it simply requires bathroom signage to be changed.

He said backers “debated on having penalties” for people who don’t comply with the law, but it’s “so frankly simplistic we didn’t feel the need to add penalties to the legislation at this point.”

Anti-LGBT activists recently tried to get a measure on the November 2016 state ballot that would have required people “to use restrooms based on their biological sex,” Ting’s office noted.

Under the proposal, which failed to gain enough signatures to make it to the ballot, transgender people could have been sued for $4,000 if they used a restroom that didn’t match their gender assigned at birth. The failed initiative wouldn’t have applied to single-user restrooms.

Brad Dacus is president of the Pacific Justice Institute, which submitted that proposal.

Asked in an interview whether his group would do anything to oppose Ting’s legislation, Dacus said, “I don’t know why we would.”

The bill “makes a lot of sense,” he said, noting that it’s not “forcing multi-person male or female restrooms to become unisex.”

Ting’s proposal is “sensitive to many transgendered people who would otherwise potentially feel uncomfortable or awkward in terms of the restroom they choose to use,” Dacus said.

His stance might be surprising coming from someone who was involved with such a vehemently anti-transgender proposal as the one his group failed to gain support for, but he said there’s “nothing wrong with laws accommodating and being sensitive to the different needs of individuals” as long as others’ privacy rights are respected.

However, an email one man recently sent to the San Francisco Board of Supervisors regarding Campos’ legislation shows there are still people who have trouble with such ideas.

“You continue to cater to those with money, deviant sexual appetites, and the mentally ill,” Joe Tobie Jr. said in a January 19 note to supervisors. “San Francisco is no longer a place for decent people. … I will not support lifestyle, policies, or practices that I know are simply wrong.”

Tobie didn’t respond to an emailed request for comment.

Campos’ legislation is expected to go before the supervisors’ budget committee soon.