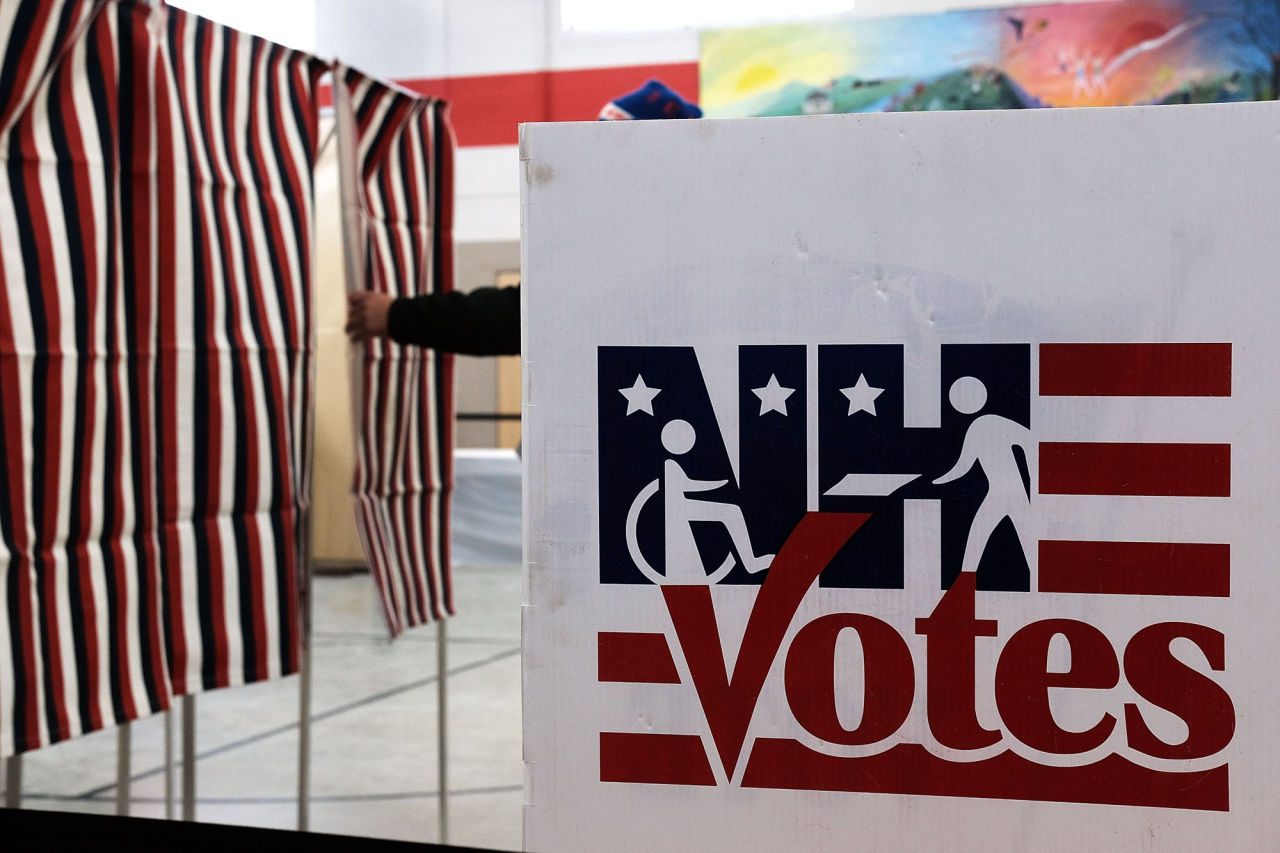 BY LISA KEEN  |  LGBT news out of the New Hampshire presidential primary this week was both familiar and bizarre.

The LGBT community in New Hampshire appeared to be split between the top two Democratic candidates –Hillary Clinton and Bernie Sanders. That was much like it was in 2008 between Clinton and Barack Obama.

But on the odd side of the picture, Republican presidential hopeful Donald Trump beckoned a woman in a rally audience Monday to shout out the word “pussy” to characterize another male GOP candidate. And at a diner in Manchester the same evening, a gay man chided Republican contender Marco Rubio for his opposition to marriage for same-sex couples, and an elderly patron asked Rubio whether U.S. Senator Lindsey Graham is gay.

When the results were in Tuesday night, Sanders had a wide margin of victory over Clinton; and Trump had a wide margin over the now eight-person field of Republican candidates. Ohio Governor John Kasich, the closest thing to a moderate in the GOP field, came in second, ahead of the Iowa caucus winner Ted Cruz, former Florida Governor Jeb Bush, and Rubio.

Both of the remaining Democratic candidates gave speeches Tuesday night that included mention of LGBT people several times. In his speech, Republican Trump promised to “take care of everything –it’s going to be great.” Kasich promised to “leave no one behind” and “to solve the problems in America, not by being extreme.”

In his victory speech, Democrat Sanders said “the people want real change” and that it’s “just too late for the same old, same old establishment politics.” That comment seemed to echo a remark Sanders made last month, when he characterized the Human Rights Campaign, a national LGBT political group that endorsed Clinton, as being part of “the political establishment.” But later in the speech, Sanders said, “We must pursue the fight for women’s rights, for gay rights, for disability rights.” He said his campaign will bring together “black and white, Latino, Asian, Native American, straight and gay, male and female, people born in America and people who immigrated here.”

In her concession speech Tuesday night, Clinton said she was committed to breaking through the barriers of discrimination, adding, “LGBT people shouldn’t be fired from their jobs because of who they are and who they love.” She mentioned the rights of LGBT people in saying she would fight for the rights of many minorities.

The community split
There was no survey data to indicate where the LGBT vote in Iowa or New Hampshire went, but anecdotal information in both states suggests the LGBT was split between Clinton and Sanders.

Baxley credited Sanders with standing up for the LGBT community long before it was acceptable.

“Only a few brave souls outside our community were willing to stand with us” during the early years of the AIDS epidemic, said Baxley. But during those years, “then-Mayor of Burlington Bernie Sanders was banning housing discrimination against gays and lesbians, and signing city proclamations for Burlington’s Gay Pride march.”

Baxley, who served on the New Hampshire for Bernie steering committee, also noted that Sanders was one of only 67 members of the U.S. House to vote against the Defense of Marriage Act in 1996.

“I remember how he called out another member of Congress on the House floor when that member, Duke Cunningham, used a homophobic slur about LGBT people serving in the military,” wrote Baxley. “I remember when Vermont passed civil unions and how he supported that earth-shattering first step. Bernie Sanders was one of the first senators to come out publicly in support of full marriage equality.”

Portsmouth Assistant Mayor Jim Splaine, who shepherded the state’s marriage equality bill through as a state representative, said he appreciates Clinton’s “fight against AIDS and discrimination against those living with HIV.”

“While I appreciate the support on the cause by others like Bernie Sanders, and thank them, I know that Hillary Clinton had joined the cause — done the work — led the fight  — achieved success —  at the times when it mattered most.”

“I don’t believe electable, no matter what the polls say, no matter what my good friends who love him and will vote for him say, I just don’t think this country is going to elect someone who espouses socialist principles as deeply as he does,” said Butler.

Clinton, he said, “is the best person for the job, plain and simple. I am incredibly impressed with the depth and breadth of her knowledge and experience.”

Butler said Clinton gained a lot of valuable experience as Secretary of State and that she’s become “personally more accessible” in this campaign, compared to 2008.

“In meeting her this time, talking with her, working with her campaign, seeing her countless times as she has been through the state, she is real person, she is an accessible person, she listens and responds to people’s personal concerns,” said Butler. “I’ve grown to like her a whole lot.”

“I’m 66 years old,” said Butler. “I’ve evolved and my understanding of what we can achieve as a community, and I think that Hillary has evolved as well. I trust that she supports the entire width and breadth of our community.”

Butler said there’s no way to know just how divided the LGBT community in New Hampshire is, and he knows people supporting both candidates.

In an incident that drew a lot of media attention, Trump laughed and made much ado about a female audience member’s yelling out “pussy” when Trump was describing U.S. Senator Ted Cruz’s position on water boarding as an interrogation technique. When audience members couldn’t hear the woman’s first pronouncement, Trump asked her to shout it out again and then he blared it out.

“You’re not allowed to say –and I never expect to hear that from you again,” he said, speaking directly to the woman. “She said [he’s] a pussy. That’s terrible.” The audience roared its approval and Trump seemed to enjoy the response.

On MSNBC’s Morning Joe Tuesday, Trump brushed off the incident, saying, “We were all just having fun. It was a great moment. I got a standing ovation. The place went wild. …All I was doing was repeating because people couldn’t hear it, so I was doing everybody a favor.”

Log Cabin Republican President Gregory Angelo chalked it up to “just another madcap event in a campaign fueled by one madcap event after another.”

But another prominent gay conservative, Jimmy LaSalvia of the now defunct GOProud group, said he was “appalled to see a presidential candidate behave like that and repeat the word….”

“The real pussies are all the members of the Republican Party who haven’t stood up to him and [have] allowed his campaign to go on as long as it has,” said LaSalvia. “Now, they have allowed him to define their party.”

And Rich Tafel, former president of the national Log Cabin group, said, “I find Trump engaging in high school bully like behavior and the mainstream media is like the high school boys and girls who simply can’t get enough of it and give him the attention he craves. The entertainment industry created him and the political press perpetuates him. The views he’s tapped into are important to give voice to, just not the way he does it.”

“Well, you can,” said Trump. “And look, we’re going to bring people together. And that’s your thing, and other people have their thing. We have to bring all together and if we don’t, we’re not going to have a country anymore.”

It was an especially hard week for U.S. Senator Marco Rubio, a candidate some Log Cabin Republicans showed an interest in months ago. But after last Saturday’s Republican debate on ABC, Rubio has been losing support. The reason? He kept repeating a well-rehearsed (though awkwardly worded) criticism of President Obama after New Jersey Governor Chris Christie taunted him for just repeating well-rehearsed spiels.

His uncomfortable exchange with a gay man at a diner in Manchester on Monday also gained considerable publicity. According to the New York Times, Rubio and his son were doing a campaign walk-through a very crowded diner when he came up to a table occupied by Timothy Kierstead, his husband, and mother. Kierstead used the occasion to ask Rubio, “Why do you want to put me back in the closet?”

“I don’t,” replied Rubio. “You can live any way you want.” Kierstead told Rubio he thinks Rubio’s positions treat Kierstead and his husband as if “we don’t matter.”

“No, I just believe marriage is between one man and one woman,” said Rubio, according to the Times.

“I think that’s what the law should be,” added Rubio, “and if you don’t agree, you should have the law changed by a legislature.”

In fact, the legislature of New Hampshire did change the law to treat same-sex couples the same as straight couples in marriage licensing, back in 2010.

Later, at the same diner, Rubio approached a 92-year-old woman who asked him whether U.S. Senator Lindsey Graham is gay. The Times reported that Rubio chuckled and said “No.” (The Boston Globe has a video of the exchange, provided by the American Bridge PAC.)