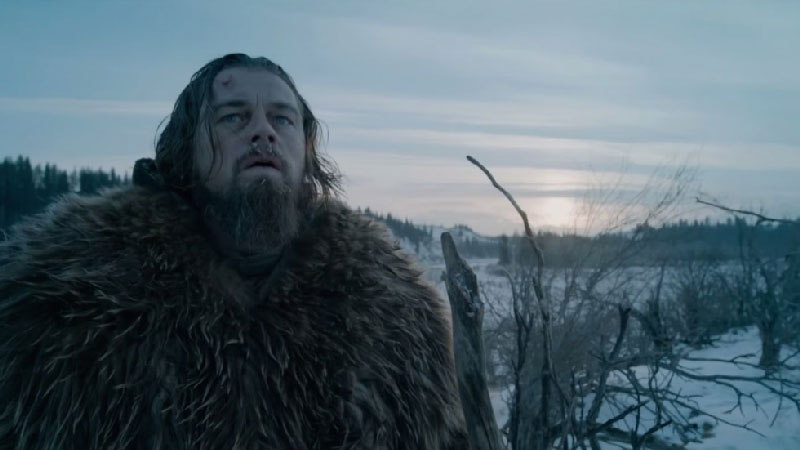 BY JOHN PAUL KING  |  With a title like “The Revenant,” one might expect the newest work by Alejandro G. Iñárritu to be a horror movie.  Indeed, though its name is meant only as a metaphoric reference to the central character’s experience, many viewers may find themselves horrified by much of its content and imagery.

This is not a criticism; rather, it’s a warning to viewers who might otherwise be unprepared for the level of intensity attempted- and achieved- by Iñárritu as he tells this story of determination and survival within the terrifying beauty of the natural world.

The screenplay, by Iñárritu and Mark L. Smith, is based “in part” on a novel by Michael Punke, which was itself based on the real-life story of Hugh Glass.  An experienced frontiersman, he was part of an 1823 fur trading expedition in the northern reaches of the Louisiana Purchase; abandoned and left for dead by his comrades after sustaining severe injuries on the trail, he managed to crawl 200 miles to the nearest settlement- despite his grave condition, the harsh weather, and the danger from hostile Arikara war parties in the region.

The real Glass became something of a legend, to be sure; through the combined dramatic embellishments of Parke’s novel and the movie’s script, that legend is transformed into a classical revenge tragedy exploring the contrast between the savagery and nobility of man.

To go into any more detail about the plot would be difficult, not so much for fear of giving away the twists and turns of the story as for the sake of preserving the revelatory power of the film’s key moments.

Iñárritu uses a fluid camera to immerse his audience, creating an effect which is less like watching a series of events take place than it is like being in the midst of them as they arise and recede.  It’s disorienting and overwhelming; the vast scope of the wilderness setting, the camera’s restless focus, the hyper-reality of the natural light and the meticulously crafted soundscape- all these combine to form an atmosphere pregnant with surprises, both wondrous and terrible.

When those surprises come, the film commands a visceral response that rises beyond mere involvement in its narrative and connects you with that primal corner of your psyche that still sends prickles up your spine whenever you hear an animal howling in the darkness of night.

Iñárritu, far from rehearsing yet another big-screen tale that could easily have been lifted from a samurai epic or “spaghetti” western, seeks to provide his audience with a concrete experience of unthinkable occurrences.

It may have been the director’s audacious vision to bring such remarkable things to the screen, but an expert team was necessary to realize it.  The film’s roving camerawork, though carefully plotted by Iñárritu, was executed by cinematographer Emmanuel Lubezki, who also managed to give every shot a surreal and luminous beauty that haunts the memory long after the film is over.

Accompanying the stunning visuals is the ethereal score, composed by Ryuichi Sakamoto (in collaboration with Alva Noto and Bryce Dessner), which contributes its own sense of stark detachment and otherworldly grace to the action.

In front of the lens, Leonardo DiCaprio gives a raw performance, possibly his best to date, as Glass; he communicates a profound range of humanity with a minimal amount of dialogue, in spite (or perhaps because) of the sheer physical ordeal of filming the role.

No less effective is Tom Hardy as the darker half of the story’s human conflict, creating an unforgettable portrait of a man who has become hardened into the personification of self-serving indifference.

“The Revenant” certainly feels unprecedented, but it does not completely escape its very “Hollywood” roots.  It retains many of the familiar tropes found throughout decades of frontier adventure movies, and it yields to the temptation of rewriting history in order to provide the kind of satisfying climactic showdown expected in such fare.

Nevertheless, Iñárritu, who is Mexican, brings an outsider’s perspective to this inherently American milieu and transcends its form to offer something beyond expectation.  Even as he charts the inexorable force of will that drives the drama, he confronts us with the breathtaking enormity of Nature and thereby forces us to contemplate our own irrelevance in the face of its awesome power.  He took well-documented pains to do so- going over budget and behind schedule in order to shoot his film in sequence with natural light, under grueling and dangerous conditions which sometimes endangered his cast and crew- but the payoff is visible in every extraordinary frame.

“The Revenant” shows us a kind of cold, profound beauty that is rarely seen in a mainstream American film, and that is a precious reward for those who have the stamina to endure it.