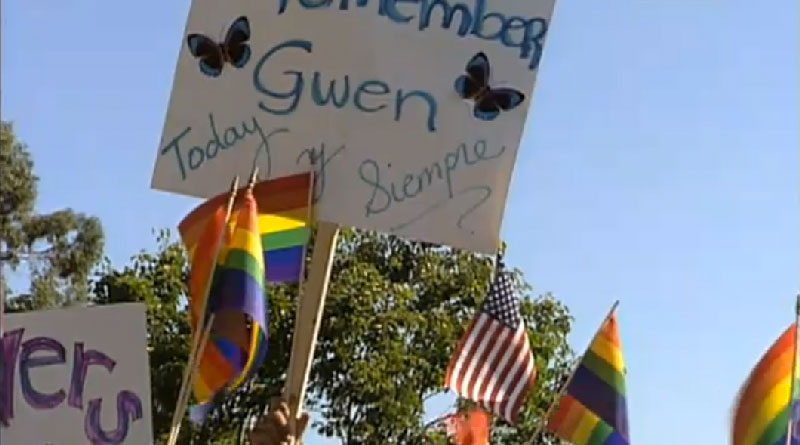 BY SETH HEMMELGARN  |  The mother of slain transgender teen Gwen Araujo, whose murder over a decade ago played a huge part in advancing transgender rights, is struggling financially and has launched an online crowdfunding campaign.

“I have been borrowing money to keep afloat, but I’m drowning,” Sylvia Guerrero, 51, who’s suffering from post-traumatic stress disorder and other medical issues, wrote on a Gofundme site she recently launched (https://www.gofundme.com/mjcbpda6).

“I made a promise to Gwen that I wouldn’t give up, and that I’d keep moving forward,” Guerrero said in an interview. “She keeps reassuring me that things are going to be OK.”

Araujo, 17, was killed in October 2002 at a house party in Newark, California. Two men at the party had reportedly had sex with the young woman they’d known as Lida, and they murdered her after their suspicions that she was biologically male were confirmed. The men then drove Araujo’s body to a grave in the Sierra foothills.

Michael Magidson, 35, and Jose Merel, 36, are still in prison after being convicted in Araujo’s murder.

Jason Cazares, 35, pleaded guilty to voluntary manslaughter and was discharged from prison in 2012.

With Guerrero’s help, Araujo’s murder brought unprecedented attention to transgender issues and prompted state law barring the use of the “panic defense,” where people charged with murder defend themselves by claiming the victim’s sexual orientation or gender identity triggered them.

But 13 years after her daughter’s brutal murder, Guerrero is faced with physical and financial problems, on top of the emotional destruction that came with her daughter’s death.

“I’ve lost everything,” Guerrero said. “I lost my kid. She’s never going to go home. That’s the one thing I wish never happened … When they killed Gwen, they killed her mom. This is just what’s left of me. It’s changed my life forever.”

Guerrero said she’s suffered disabling PTSD since Araujo’s murder, and she also has celiac disease and rheumatoid arthritis, but she said her Social Security disability benefits were recently cut off after she neglected to turn in some required documentation. Among other problems, she hasn’t had access to her medications or seen her doctors in months. She is working on regaining her benefits.

For months, Guerrero has been splitting her time between two of her children’s homes and is currently living in the Central Valley city of Manteca. She hasn’t been able to get a home of her own.

“When this was the top story, everybody was there,” Guerrero, who cried through much of the recent interview, said. “People were coming out of the woodwork.” But now, she said, “nobody wants to help. It’s not today’s news. It’s old.”

As of Monday, December 28, a month after the site was first published, people have contributed $1,397 toward Guerrero’s goal of $4,000. She hopes to buy a used car with the money.

People familiar with Guerrero’s work said her contributions to the LGBT community are significant.

Chris Daley, who co-founded the Transgender Law Center around the time of Araujo’s murder, said last week, “I think that at a time when a lot of people felt like they couldn’t connect with the transgender community, Sylvia and her family and her courage provided a way for folks to understand the harm that transphobia causes.”

Daley, who now is deputy director at Just Detention International, added, “Embracing your transgender child, particularly your murdered transgender child, wasn’t an inevitability. This was a choice that Sylvia and her family made” to honor Araujo and her identity.

He said he hadn’t yet seen the link to the Gofundme page. Soon after a reporter emailed him the link, though, he shared it on Facebook.

Mara Keisling, executive director of the National Center for Transgender Equality, said Guerrero “was very visible at a time when there hadn’t been a lot of visibility” of transgender people’s parents, especially those of trans people who’d been “slain.”

“Sylvia basically challenged us to really think about her child and what her child had been through, and what it said about society that that could happen to somebody. She insisted that we not forget Gwen, that we really think through it.”

But Keisling bristled when asked whether she’d made a contribution to Guerrero’s fund.

“I don’t think that’s an appropriate question to ask,” she said. “I don’t want to talk about that topic.”