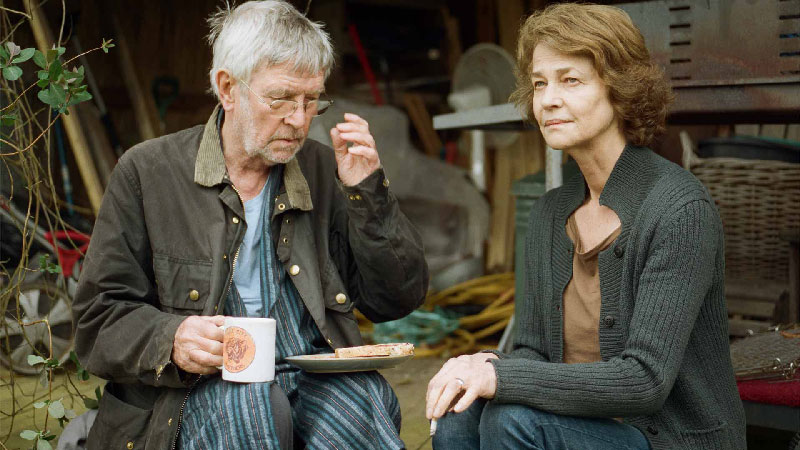 BY JOHN PAUL KING  |  Roughly midway through “45 Years,” there is a discussion about the buildup of melted glacial ice due to climate change, and how it will eventually break through the geography that contains it to come cascading down the mountainside and obliterate everything in its path.  It’s an ominous scenario which provides a vivid metaphor for the process of emotional devastation charted by out British writer/director Andrew Haigh in this, his latest slice-of-life drama about the complexities of a relationship.

Adapted from the short story “In Another Country,” by David Constantine, “45 Years” follows an aging couple, Kate and Geoff (screen legends Charlotte Rampling and Tom Courtenay), through the week before a party celebrating their 45th wedding anniversary.  As they go about the business of planning the event, Geoff receives a letter notifying him that a body has been found- that of his former girlfriend, who perished in a fall while they were hiking through the Alps together, 50 years ago.  Though Kate has known of this occurrence, the news triggers a resurgence of long-withheld memories in Geoff, and as they gradually come to light she begins to question everything she has assumed about her relationship with her husband, and to suspect that their long and seemingly happy marriage has been built upon a lie.

In a way, Haigh’s latest film serves as a companion piece to his previous feature, “Weekend,” Both are, at their core, about a relationship threatened by the emotional baggage of past experiences; in one, the ability of the couple to open up to each other allows them a hope of breaking through the boundaries between them, while in the other a lack of openness results in a gulf which may ultimately be impassable.  Though the former film features two young gay men at the possible beginning of their relationship, and the latter is about a mature heterosexual couple at the possible ending of theirs, they could essentially be bookends of the same story, each serving as a mirror in which we can find food for thought about the way we deal with our own baggage.

Once again,” Haigh’s screenplay relies heavily on naturalistic dialogue, allowing him to direct his actors towards emotional honesty and coax from them the nuanced performances required to reveal the layers between the lines.  It was this meticulously-crafted realism that brought acclaim to “Weekend,” and in “45 Years” it is perhaps even more tangible.  One reason for this, of course, is that here he is blessed with two of the most gifted film performers of their generation, both clearly still at the top of their form.

Courtenay, evoking memories of the young, passionate intellectuals he portrayed in the British social realism cinema of the early sixties, is superbly opaque as Geoff.  The qualities of those youthful characters are here transposed into an older iteration, so that the “angry young man” has evolved into a grumpy old one, and the aloof emotional distance now disguises itself behind the distracted dottiness of the aged; we never doubt the honesty of the feelings he expresses, but we are never sure how many others he obscures behind that benevolent mask, nor can we tell if he is hiding them even from himself.

As much as Courtenay is guarded, Rampling wears her heart on her sleeve.  With the likable but inscrutable Geoff as her husband, it is Kate’s perspective we must share, and the actress uses all her long-renowned intelligence and bravery to show it to us with absolute clarity.  Taking us on a downward progression, from the easy confidence of a woman in complete control to the insecurity of one uncertain of everything upon which she has built her life, it is up to her to provide the movie’s emotional center.  She is more than up to the task; her luminous performance is no less clear for its sublime subtlety than her beauty is diminished by the lines which grace her iconic face.

As great as both stars are individually, “45 Years” works because together they are incandescent.  The relationship they portray feels so heartbreakingly real that at times one almost forgets the film is not a documentary- and it is here that credit must come back around to Andrew Haigh, who has not only provided the collaborative freedom to cultivate the brilliance of his stars, but used a sure hand behind the camera to merge subdued realism with visual poetry in a way that asserts itself as pure cinema without ever being flagrant.  It is a rare movie that allows its major revelations to take place without a single line of dialogue to underscore the moment; “45 Years” is self-assured enough to do so, and Haigh is a strong enough director to pull it off.