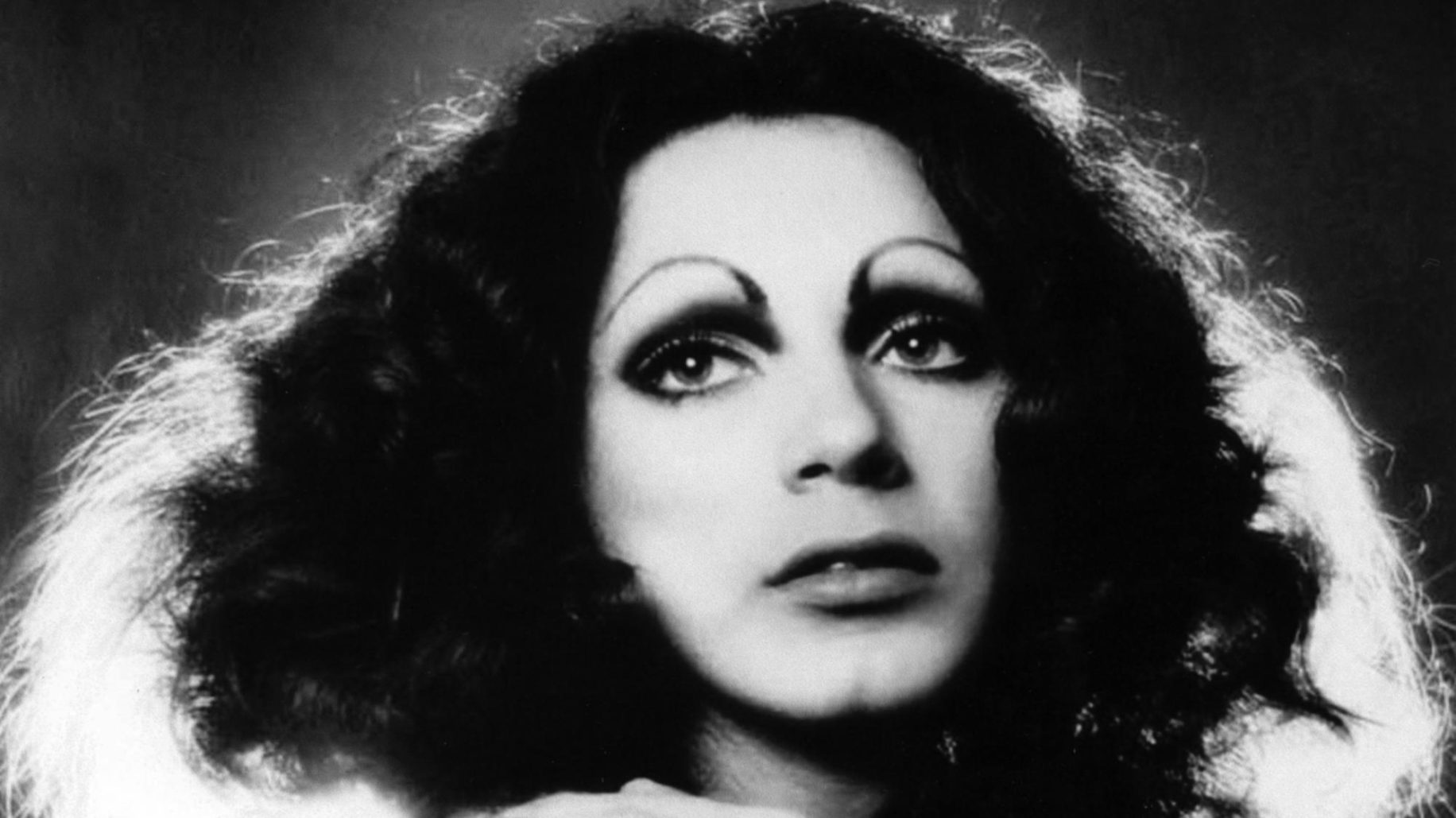 So quipped one Haroldo Santiago Franceschi Rodriguez Danhakl, better known to the world as Holly Woodlawn. The late great actress, cabaret artiste, salesgirl and overall one-of-a-kind character died of brain and liver cancer on December 6, 2015. She burst upon an unsuspecting universe in 1970 with Trash, an Andy Warhol production in which she was originally cast in a small role as junkie-thief and Joe Dallesandro’s long-suffering Welfare-aspiring girlfriend. But director Paul Morrissey recognized immediately that he had a powerhouse on his hands.

Holly’s featured part became a leading one and its impact was unprecedented. No less a Hollywood eminence than director George Cukor was so impressed that he campaigned to have Holly recognized with an Oscar nomination. That didn’t happen, and the films that followed never completely fulfilled Holly’s potential. But maybe she was just too much for the movies, or the stage or night clubs. Maybe Holly Woodlawn was too much for this world.

Born on October 26, 1946 to “a Puerto Rican mother and an American soldier of German descent who fled the marriage almost immediately after the wedding (The New York Times).” Apparently he didn’t know what he wanted. His offspring knew what he wanted, donning drag at 16 and inventing a new name for herself. Holly, she claimed, was taken from Truman Capote’s Breakfast at Tiffany’s (“Holly Golightly”) and Woodlawn from a sign she saw on an episode of I Love Lucy marking a subway stop. Or maybe it was the Woodlawn cemetery – resting place of Hollywood’s rich and famous. Or maybe – oh whatever.

Holly headed North to make her fortune – or the next best thing to it – as the first verse the famous Lou Reed song “A Walk on the Wild Side” says.

Still the side she’d chosen to walk on wasn’t in some ways as ‘wild” as all that. She considered sex reassignment surgery, and decided against it. That’s why describing Holly as “transgender” as far too many, including the New York Times so reflexively do today isn’t really accurate. Likewise for Jackie Curtis and Candy Darling, co-stars in her follow-up Warhol-Morrissey effort Women in Revolt (1971). Long-time gay activist Jim Fouratt puts it best: “I knew Holly, I knew Jackie and I knew Candy. They never identified as transgender. They did identify as gay men who did drag and did not conform to dominant gender expression roles. Brave and courageous each of them, they were like creatures in a Genet novel.”

Warhol was their Genet. But they had artistic resources as well. Candy went on to co-star with Tennessee Williams in his chamber play Small Craft Warnings before her untimely death in 1974. Jackie (who went back and forth between make and female personae) had written and directed plays off-off Broadway; many of which featured Holly and Candy  —Glamour, Glory and Gold: The Life and Legend of Nola Noonan, Goddess and Star. Heaven Grand in Amber Orbit and Vain Victory. One even boasted performing along with the theatrical debut of an actor named Robert DeNiro. But Jackie’s untimely death in 1985, ended his/her dreams of Broadway and Hollywood. Holly’s dreams were of another sort entirely.

Not long after the success of Trash Holly was arrested for impersonating the wife of the French Ambassador to the United Nations. An inveterate shoplifter, fame never dissuaded Holly from a little offhand larceny. When she was taken to the Women’s House of Detention she was quickly transferred to a men’s facility when her biological sex was discovered. Holly had considered sexual reassignment surgery – and then decided against it. Having a female “sexual identity” and “presentation of self” was all she really needed.

But for the world of show business it left her “odd girl out.” She was able to flash her funky glamour in small-scale “underground’ epics like Scarecrow in a Garden of Cucumbers (1972) and Broken Goddess (1973), do brief turns in Billy’s Hollywood Screen Kiss (1998), Twin Falls Idaho (1999), and at what turned out to be the end of her life the cable series Transparent (2014), but little more. This led at one point to her working as a salesclerk at the Melrose Avenue store “The Soap Plant” – where she regaled customers with her offhand wit.

In 1991 her autobiography “A Low Life in High Heels,” (co-authored with Jeffrey Copeland) , came out from St. Martin’s press. It was optioned for the movies but no movie was ever made. Meanwhile elsewhere Off-Broadway – and later on the Great White Way itself, John Cameron Mitchell was winning rave reviews and overflow crowds for Hedwig and the Angry Inch – his show  about an East German rock musician suffering from romantic rejection and a botched sex change operation. Lord knows Holly would have made a splendid Hedwig. But by the time Mitchell’s star rose, Holly’s was dimming as spinal problems rendered her wheelchair-bound for the better part of her last decade. Oh what a Hedwig Holly would have made. But like so much else that was not to be

Early in 2015 Holly’s condition became truly serious. Hospitalized at Cedars-Sinai Medical Center in Los Angeles she was so weak it was feared she would die on the spot. There were cancer lesions on her liver and brain. But even at Death’s Door, Holly’s spirit never wavered. As writer, producer and close friend Gabriel Rotello described it “In the last several months I had really lucid conversations with Holly.  She would regale me with fascinating stories about her life.

“You know,” Rotello continued,” She was seen as going from New York to Los Angeles and staying there. But there was a period in the late 1980’s when she was back in New York and was a very important part of the club scene. At the ‘Limelight’ Marc Shaiman and Scott Wittman created a mini-musical parody for her “The Sound of Muzak” – in which she played “Maria.” This was a continuation of the sort of thing she’d done years before in her nightclub act at “Reno Sweeney’s.” All sorts of people came to see her nightclub shows. Liza Minnelli loved her.  Ethel Merman was there one night cheering her on.

Holly always had this amazing way of truly charming people wherever she was. When she was put into the ‘Sharon Care’ nursing home I visited her and all the old ladies who were in there couldn’t get enough of her.”

As she was heading for her final curtain “downtown” luminaries like Penny Arcade and Constance Cooper with Robert Starr and Elda Stiletto created a  “Go Fund Me” campaign to take care of all expenses. It was successful and any remaining funds are to be were earmarked by Holly in her Last Will and Testament, says Robert Starr, her estate’s executor, to the Los Angeles LGBT Center for the creation of The Holly Woodlawn Memorial Fund benefiting transgender youth. This fund is an important and wonderful testament to Holly’s life, she felt, hoping to provide scholarships, counseling, and education for underprivileged and homeless transgender youth.

We all have our memories of Holly – both those who actually knew her and fans who because of her vivid performances on screen and stage, felt they did. I myself saw her countless times in sundry circumstances over the years both in New York and L.A. But my favorite memory of her is of a television appearance she made not long after Trash and Women in Revolt burnished her fame. It was on a late night show Geraldo Rivera presided over in New York, and the sight and sound of Holly truly discombobulated him, producing an aria of mounting frustration.