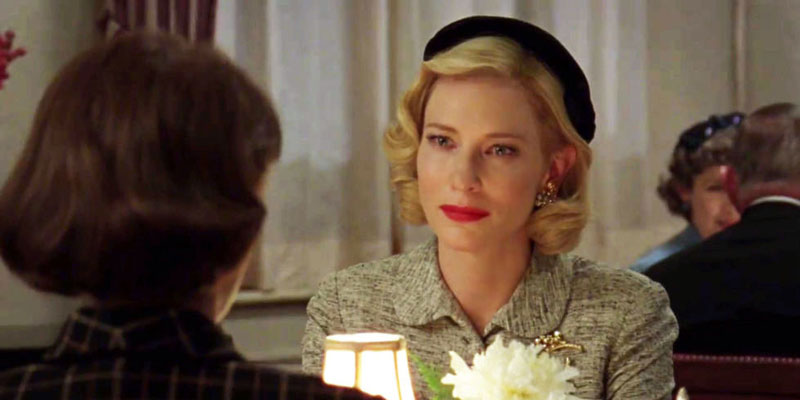 BY STEVE ERICKSON  |  Conservatives like to romanticize the ‘50s and pre-counterculture ‘60s as a period of widespread prosperity when people of color, gays and/or women knew their place. The reality was more than a little different, as one can tell from bebop, early rock’n’roll and writing by the Beats. But it’s a hard period to film, especially since Frank Tashlin, Nicholas Ray and Douglas Sirk did a pretty good job of subverting it at the time. Gay director Todd Haynes seems enamored of it – following “Far From Heaven,” “Carol” is his second film set between 1950-1965.“

Mad Men” attempted to show how awful ‘60s life was if you weren’t a straight white man. Its first season was particularly heavyhanded about this point. Yet the show found a following of guys who saw something appealing in its depiction of smoking, drinking and open womanizing at work anyway. “Carol” suffers from much the same dilemma. It critiques and glamorizes ‘50s life at the same time. One could lay the same charge at “Far From Heaven,” but that film worked through a filter of movie references, as if watching an eclipse, instead of purporting to depict ‘60s life directly. Drawing both on Sirk and his ‘70s German disciple Rainer Werner Fassbinder, Haynes made a “melodrama,” albeit a completely sincere one. “Carol” is a melodrama without the quotes, but perhaps Haynes needs them.

Therese (Rooney Mara) works at a department store modeled after Macy’s. When the film begins, it’s shortly before Christmas. An attractive customer, Carol (Cate Blanchett), places an order but forgets her gloves. Both Therese and Carol are involved with men – although Carol is in the process of divorcing her husband (Kyle Chandler) – but they’re clearly drawn to each other. Therese comes out to Carol’s house in New Jersey to return the gloves. This forms the start of a dangerous but rewarding relationship. Unfortunately, Carol’s husband uses her road trip with Therese as well as a prior lesbian affair with Abby (Sarah Paulson) in court as a reason to deny her child custody.

Part of the problem with “Carol” is that its cast seems to have stepped out of a ‘50s Hollywood movie. Butch lesbians hover in the background of a scene or two, but Therese isn’t one of them: rather, she’s a tomboy whose bohemian tendencies and androgynous looks evoke Audrey Hepburn. Carol exudes glamour – there’s never a shot in which she appears less than gorgeous. Haynes and cinematographer Ed Lachman fetishize the verdant greens of her warfare, the bright red of her lipstick and even her ever-present cigarette smoke. Kyle Chandler doesn’t have much to do but act like a macho oaf. The actor has been typecast as coaches, FBI agents and other kinds of authority figures, but he doesn’t do much here to prove he can expand his range. His work here is a far cry from Dennis Quaid’s  excellent turn as the gay husband in “Far From Heaven.”

The opening scenes of “Carol,” in which Carol escapes a party in a car on a rainy New York night, could be the cover of a ‘50s Frank Sinatra album. Indeed, the film’s most striking scenes take place in cars – Haynes and Lachman seem to like filming through windows. Perhaps this reflects their remove from their cast and characters, as men making a story about a lesbian couple. (However, screenwriter Phyllis Nagy is female.) In one striking moment, Haynes cuts between enormous close-ups of Therese and Carol’s faces as light gleams off them.

Source novelist Patricia Highsmith based “The Price of Salt,” from which Nagy adapted “Carol,” in part on her own life but imagined things turning out better. It was the first lesbian pulp novel with a happy ending.  In real life, she fruitlessly stalked the woman Carol is based on. Highsmith’s misanthropy – she was a lesbian who hated women and a supporter of Palestinian rights who despised Arabs – is a far  cry from Haynes’  buoyant film.

Haynes seems almost alone among contemporary LGBT filmmakers in being so drawn to the past. British director Terence Davies may be his only peer in this tendency, and Davies’ work is overtly autobiographical. Haynes is too young to be filming his childhood, and he’s clearly not telling the stories of his parents’ lives either. He’s extremely literate, both in terms of books and cinema, but that knowledge has its limits. “Carol” suffers from a fascination with the past that leaves out the protective filters from “Far From Heaven.”