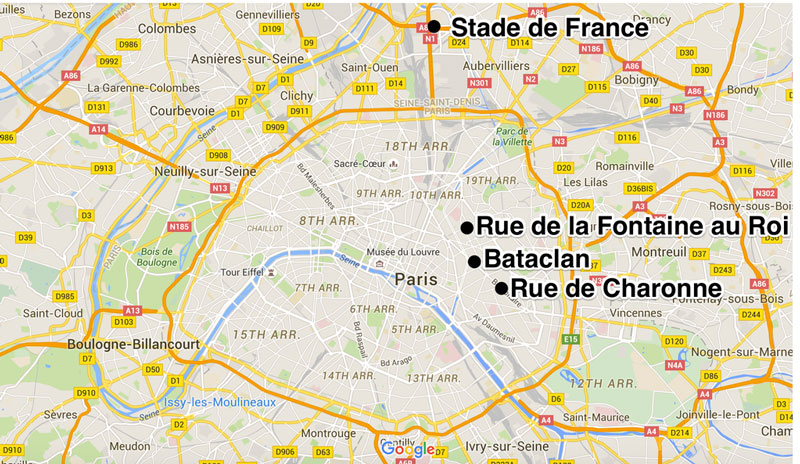 One of Paris’ famously gay neighborhoods, at the border of the 4th and 10th arrondissement, was tonight the scene of the city’s deadliest attack since World War II.

As many as 150 people are been reported to have been killed and more than 300 injured in attacks at 7 different locations around Paris, including 4 locations just north of the Marais and Republique.

Some reports say that as many as 118 people were reportedly killed inside the Bataclan theater, a popular concert venue at Republique where 6-8 attackers at one point was said to be holding at least 100 people hostage).

Three of the attackers have been killed by police. The attacks were carried out by 3 teams of Isis members.

Paris is on total lockdown and soldiers are being deployed throughout the capitol for the first time since 1944.  French borders are closed and a state of emergency declared across France.

Attackers inside Bataclan Theater, where Los Angeles based musical group, Eagles of Death Metal, was performing, were said to be shooting hostages individually. France 24 reports that explosives were tossed at the hostages. Explosions could be heard from outside the theater.

A man who says he escaped told CNN that the terrorists “calmly” reloaded their guns several times.

At least 40 others were killed in shootings at Le Cambodge restaurant and Le Carillon bar, also in the 10th arrondissement and near a Les Halles shopping center.

There was a loud explosion inside or near Stade de France, where the French national soccer team was playing Germany. Some reports have suggested it was a suicide bomber.

An expert on ISIS propaganda and author of a recent book on the terrorist group, told local reporters in Paris that it’s “too soon to say” much about the attacks, but that ISIS supporters are tweeting about it.