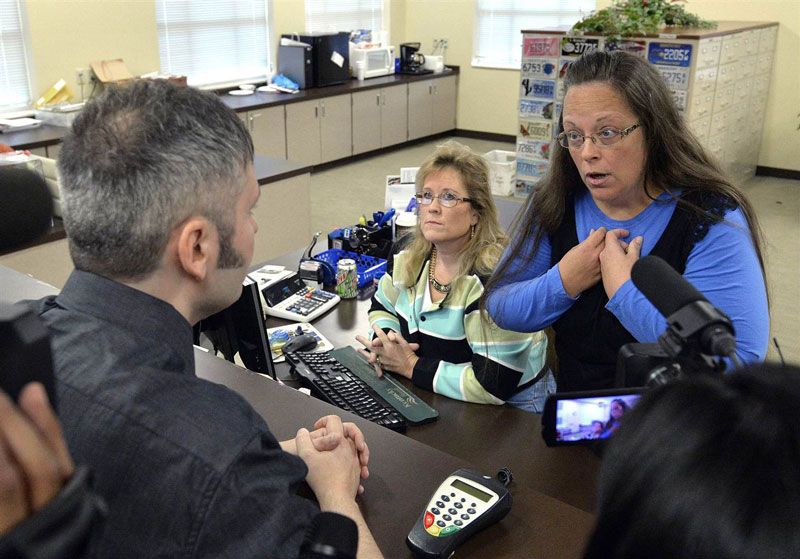 BY TROY MASTERS  |  That ultimate parody of christianity, clerk Kim Davis, is wasting more of your tax dollars.  This time she is asking a federal appeals judge to toss out all the rulings issued by the district court — she was jailed for denying same-sex couples marriage licenses.

Davis, chief clerk of rural Rowan County, was jailed for five nights  in September after defying that order.  Her case inspired a misguided debate about the intersection of religious freedom.

Davis employed a tactic against the federal government that had previously only been attempted against district court orders or individual states, ceasing the issuance of  all marriage licenses rather than comply with the U.S. Supreme Court’s decision that legalized gay marriage. The American Civil Liberties Union, representing several couples whom she had denied, sued her and the federal judge ordered her to resume issuance of licenses. She refused and Bunning, holding her in contempt, ordered her to jail.

Davis’ lawyer is requesting that the appeals court rescind four lower court’s rulings, including the order forcing Davis to issue licenses and another which held her in contempt of court. Without any irony, the appeal brazenly claims that the order ‘commandeered’ her duties in a public office to which she was elected.

“By imprisoning Davis and threatening to hold her hostage indefinitely as a prisoner of her conscience, the district court imposed direct pressure and substantial burden on Davis, forcing her to choose between her religious beliefs and forfeiting her essential personal freedom on one hand, or abandoning those beliefs to keep her freedom on the other hand,” says her appeal.

When Davis returned to her duties she changed the language on the licenses of same sex couples by adding “pursuant to federal court order.”

Davis also sued outgoing Gov. Steve Beshear for ordering all Kentucky county clerks on the day of the Supreme Court’s ruling, directing them to immediately issue licenses to same-sex couples. The suit alleges that because he acted by fiat rather than as a legislator and that he showed no sensitivities to the religious concerns of civil workers.

Republican Matt Bevin, a businessman referred to locally as “Kentucky’s Donald Trump, won that state’s governorship the next day.  Bevin, who had rallied in support Davis, handily defeated Democrat (and current Kentucky Attorney General) Jack Conway.  Talking heads across social media and on TV attributed Conway’s defeat to his role in refusing to appeal a federal court decision striking down the state ban on same-sex marriage.