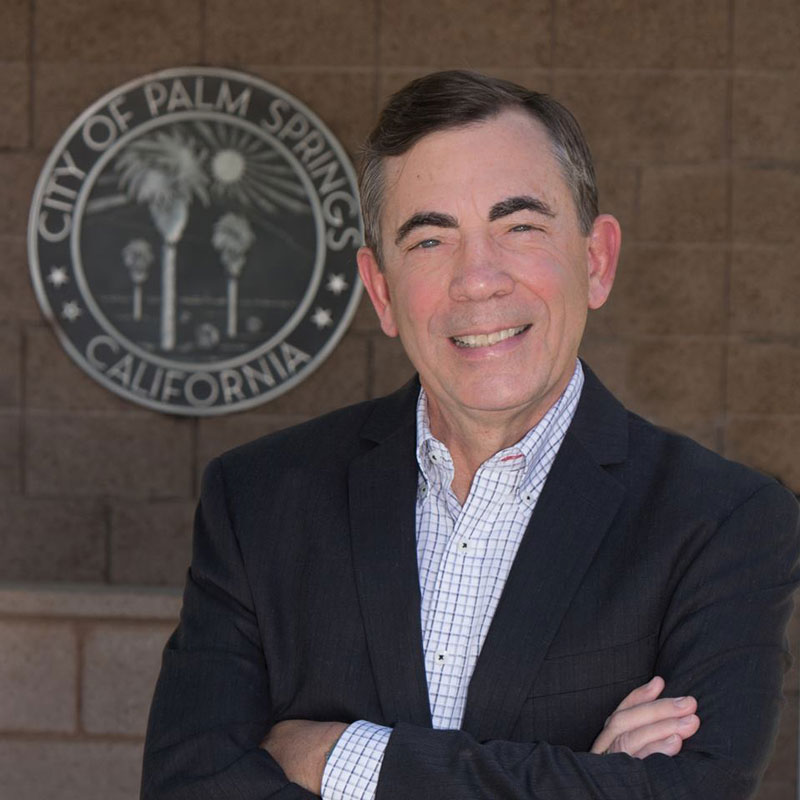 In a contest dominated by the ethical scandal involving outgoing gay Mayor Steve Pougnet, centered on his ties to a local developer, the winner in the eight-person contest to succeed him was gay retired Navy Commander Robert “Rob” Moon.

According to unofficial returns Wednesday morning, with all precincts reporting, Moon had placed first with nearly 37 percent or 3,529 votes.

“We had no paid consultants, no paid staff. We had 75, 80 people who came in every day for the last eight months and worked their hearts out for us,” Moon told his supporters at his election night party, as seen in a video posted online by the Desert Sun. “Just because they believed in us. It is the most amazing feeling in the world and I can’t thank you enough.”

Moon, who has been with his husband, Bob Hammack, for 34 years, defeated lesbian City Councilwoman Ginny Foat, who came in second with 25 percent or 2,420 votes.

Foat, the city’s sole female council member, had secured endorsements from a number of LGBT groups, such as the Gay and Lesbian Victory Fund, LGBT statewide advocacy group Equality California and the Desert Stonewall Democrats. But she faced questions during the campaign about her own votes on certain development deals backed by Pougnet.

She will remain on the council for the next two years, as her term doesn’t expire until December 2017.

Also in the mayoral race was former mayor Ron Oden, whose election in 2003 marked the first time an African American and a gay candidate had been elected mayor of the Coachella Valley city. But Oden only served one mayoral term as he opted not to seek re-election.

He placed third in Tuesday’s mayoral race, with 1,258 votes or 11 percent.

In the race for two seats on the city council, incumbent City Councilman Paul Lewin, a straight LGBT ally, appears to have lost his bid for a second four-year term. As with Foat, Lewin was hit with campaign ads that painted him as being part of the problem at City Hall.

The victors in the six-person council contest, should the current vote tally stand, are two gay men who both have ties to the Bay Area. Holding on to a 20-vote lead over Lewin is gay planning commissioner J.R. Roberts, who in the late 1990s was elected to Sausalito’s city council and served a stint as mayor before moving to Palm Springs in 2001.

Based on the unofficial returns, Roberts had captured nearly 24 percent or 4,001 votes, while Lewin trailed behind in third place with 3,981 votes.

Roberts, who has served on the planning commission since 2011, had pledged voters that he would “bring a new perspective to the government of our city with integrity, honesty and transparency.”

The clear winner in the council race was first place finisher Geoff Kors, a former San Francisco resident who moved to Palm Springs in 2011 after resigning as EQCA’s executive director. He garnered 6,126 votes, or slightly more than 36 percent of the vote.

Kors, whose husband, James Williamson, was elected last fall to the Palm Springs school board, currently works for the National Center for Lesbian Rights as a senior legislative and policy strategist. He will be replacing gay City Councilman Rick Hutcheson, who opted not to seek a third term this year.

“I think, first, we had a great campaign team who really worked hard and we had a very detailed plan on what we wanted to accomplish for the city,” Kors told the Bay Area Reporter in a phone interview Wednesday morning.

In terms of ethics and transparency, Kors said he felt they were “one of the, if not the, top issues in the race.”

Pougnet, elected in 2007, had been expected to seek a third term as mayor this year. But he announced in May that he would instead step down.

His announcement came weeks after the Desert Sun broke the news that Pougnet had voted to support a land sale sought by a local developer who had hired the mayor as a consultant. The news sparked an ongoing political ethics scandal, with Pougnet admitting he had “made a mistake” in not recusing himself from the vote.

But Pougnet also insisted that he had informed his family months prior to the newspaper’s reporting that he had decided to step down as mayor when his term ends in December. The state Fair Political Practices Commission is investigating Pougnet, and last month, agents from the F.B.I. and the Riverside County District Attorney raided City Hall and seized documents from Pougnet’s home.

The questions around city hall corruption became a focal point in the races for both mayor and the two city council seats. It was the main talking point at candidate forums and popped up in political hit pieces directed at Foat and Lewin.

As of Wednesday morning, there were still 3,500 vote-by-mail ballots and another 1,600 provisional ballots to count in the race. Thus, there is still a chance that Lewin could pull ahead and win re-election. Nor had Foat conceded her race Tuesday night.

Elections officials are expected to report revised vote tallies Friday, as the city kicks off its annual Pride weekend festivities.

Moon will be the third consecutive out gay mayor to lead the southern California desert vacation destination. Palm Springs is home to many gay and lesbian retirees – LGBT residents are thought to account for more than half of the city’s 47,000 residents – who make up a critical voting bloc in local races.

Palm Springs is also a magnet for LGBT tourists, though its image as a welcoming gay resort town has taken a hit this year due to reports of two gay bashings, the most recent occurring Sunday night. Public safety is likely to be a top concern for Moon once he is sworn in as mayor December 2.

Kors and Roberts will also take their oaths of office December 2. As the Political Notebook reported last week, Kors intends to push for the creation of an ethics and sunshine task force to review ethical issues at City Hall.

“My sense, talking to so many voters, it was less about needing new people than it was about what is the plan to move the city forward differently,” said Kors. “A lot of people put blame on the mayor for the FBI investigation. What people were constantly asking me was how are you going to avoid it happening again?”

Matthew S. Bajko is an assistant editor at the Bay Area Reporter, the LGBT newspaper in San Francisco.