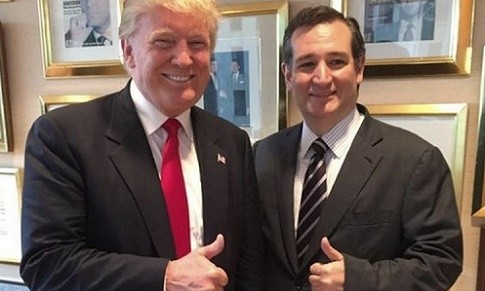 Senator Ted Cruz has risen in the latest polls and his antigay strategy seems to have played a role.

The trio stood by Swanson as he delivered a series of rants about how the biblical punishment for homosexuality is death, Harry Potter is bringing God’s judgment on America, and how if your gay child gets married you should show up to the wedding covered in cow manure.

During his remarks, Swanson reiterated his view that both the Old and New Testament require the death penalty for the crime of homosexuality, as well as his position that any Christian who attends a gay wedding can only do so in order to hold up a sign informing the couple that they ought to be put to death.

He drove home his point with a passionate declaration that if he ever found out that his own sons was gay and that son invited him to his wedding, he would show up covered in “sackcloth and ashes” and then smear himself in cow manure as he sat on the steps of the church and wailed lamentations.

“There are families, we’re talking Christian families, pastors’ families, elders’ families from good, godly churches,” Swanson said, “whose sons are rebelling, hanging out with homosexuals and getting married and the parents are invited. What would you do if that was the case? Here is what I would do: sackcloth and ashes at the entrance to the church and I’d sit in cow manure and I’d spread it all over my body. That is what I would do and I’m not kidding, I’m not laughing.”

“I’m grieving, I’m mourning, I’m pointing out the problem,” Swanson screamed as he went off about people trying to “carve happy faces on the sores” of a society that is utterly “messed up.”

Swanson closed out the “liberty” conference with a fiery speech in which he proclaimed that although he does believe in the death penalty for gays, he wouldn’t advocate for the government to execute gay people — or, at least, not yet.

The conditions aren’t right, Swanson explained. The culture hasn’t fully embraced his movement’s version of Christianity, and therefore gay people don’t know that homosexuality is a death penalty crime that they must renounce before it provokes divine destruction. He said he would recommend that the government wait to impose the death penalty until the culture shifts, giving gays time to repent.

Philip Kayser of Biblical Blueprints told one breakout session at the conference that while it may be unrealistic to expect the national imposition of biblical law at this point, it can still be achieved at state and local levels. He urged government officials like Davis to flout the federal government in order to impose their religious beliefs over whatever jurisdiction where they have sway. Such “interposition” is justified, Kayser said, as long as public officials do it in a “biblical and Christ-centric” way. “In my book, she is a hero,” Kayser said of Davis. “Magistrates must follow Christ in their interposition.”

Kayser, like Swanson, has repeatedly backed instituting the death penalty for gay people in order to comply with biblical dictates, a position he outlined in a pamphlet he distributed at the summit. (Kayser’s pamphlet also calls for capital punishment for blasphemers, Sabbath-breakers, apostates and witches.)

MSNBC’s Rachel Maddow ran a segment on the conference, but other than that, as a number of commentators have noted, the media has been strangely silent on the Republican candidates’ participation in this event.

Des Moines Register columnist Rekha Basu reports that she reached out to the campaigns of the three candidates, Ted Cruz, Mike Huckabee and Bobby Jindal (who has since dropped out of the presidential race), and found them rather reluctant to talk about it.

Before the conference, Cruz had been asked about his participation by CNN’s Jake Tapper, but brushed off the question.

Calls and emails seeking a reaction to Swanson’s remarks by spokespeople for Cruz and Jindal went unanswered. Huckabee’s spokeswoman Alice Stewart asked for documentation and was sent a video link. She responded the next day saying, “Gov. Huckabee appreciated the opportunity to speak with an audience in Iowa about the importance of standing up for our religious liberties.”

Basu also reached out to The Family Leader, an influential Iowa conservative group that sponsored Swanson’s conference and will be hosting candidates for a “presidential family forum” later this week. A Family Leader spokesman at least went as far to say that the group doesn’t condone executing gay people, but didn’t comment on the wisdom of sponsoring Swanson’s conference:

Asked if Vander Plaats or the Family Leader condemn Swanson’s remarks, Drew Zahn, its director of communications wrote in an email: “The Family Leader absolutely condemns any call for violence against homosexuals. Our involvement with the conference was intended to advocate and preserve our First Amendment religious liberties and the rights of conscience for all Americans. The Family Leader consistently advocated the Bible’s principle of treating others as you would be treated, a principle come to life in the friendship between TFL President Bob Vander Plaats and One Iowa’s Donna Red Wing.”

But Zahn wouldn’t say whether the organization would express those views to Swanson.

One wonders how far down this road the GOP is willing to allow candidates to travel. Neither the party nor the candidates can be allowed to plead ignorance about antigay extremists.

Extremism, hate a fear-mongering seem to offer the only effective way to move GOP voters.