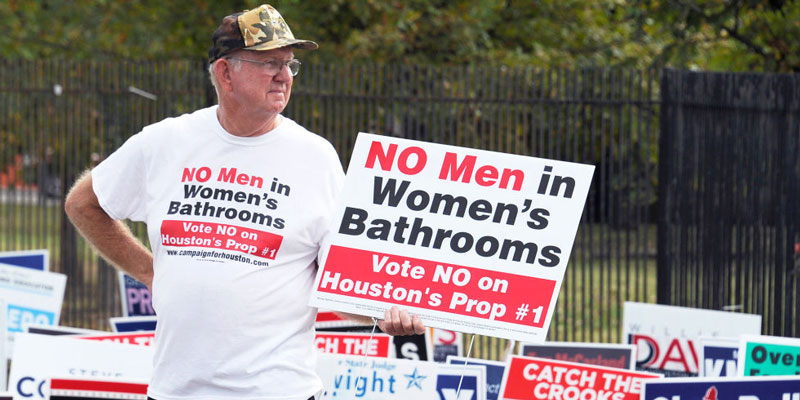 BY MATTHEW BAJKO  |  The defeat earlier this month in Houston of a sweeping anti-discrimination ordinance, due largely to transphobic messaging centered on fears the local law would allow male sexual predators into women’s restrooms, has raised concerns a similarly focused campaign could succeed here in California.

Post election coverage of the defeat in Texas saw headlines equating the loss to the passage in 2008 of a constitutional amendment banning same-sex marriage in the Golden State.

Just as the LGBT groups who waged the marriage fight seven years ago faced criticism for ignoring communities of color and failing to put LGBT people front-and-center in their advertising, the leaders of the pro-gay Houston campaign were called out for not targeting people of color or showcasing the stories of transgender people in their advertising.

But LGBT leaders in California told the The Pride, L.A. post the electoral defeat in Texas that they have learned from the mistakes made during the Proposition 8 battle and vowed not to repeat them as they prepare to defeat an expected ballot measure next fall that will center on transgender people’s access to public restrooms.

Asked if the state’s LGBT groups (or community as a whole) will be prepared in time to prevent what happened in Houston, longtime San Francisco-based transgender advocate Cecilia Cheung told the The Pride, “We are. California LGBT groups have taken the Prop 8 lessons to heart and have built a diverse, statewide coalition that is prepared to fight the ballot measure.”

In a fundraising appeal sent two days after the November 3 election to members of Equality California, the statewide LGBT advocacy group, Executive Director Rick Zbur wrote that Houston’s “harmful campaign” did not go unnoticed here on the West Coast.

“Opponents of fairness will stoop to any level of fear mongering and misdirection to try and thwart our progress. It’s startling – and the worst part is they have plans to bring these same fear tactics to a statewide anti-transgender ballot question here in California,” wrote Zbur. “But we won’t stand by and let them spread lies about transgender Californians – we’re going to fight back with the truth.”

Since June anti-LGBT groups under the banner of Privacy for All have been circulating a ballot measure that would require people to use facilities in government buildings and public schools based on the gender they were assigned at birth.

It is part of the ongoing efforts by anti-LGBT groups to repeal AB 1266, the School Success and Opportunity Act, authored by gay former Assemblyman Tom Ammiano (D-San Francisco) that went into effect January 1, 2014.

An effort that year to qualify a ballot measure overturning AB 1266, which requires public schools to allow transgender students access to various facilities, such as bathrooms and locker rooms, failed. Court challenges to the law were also unsuccessful.

The latest ballot measure is titled “Limits on Use of Facilities in Government Buildings and Businesses.” Beyond placing restrictions on how transgender people could use public bathrooms, it would also allow anyone offended by the presence of an individual in a restroom to sue that person for $4,000 in damages, as well as attorney’s fees.

Backers of the proposed initiative have until December 20 to gather 365,880 valid signatures to qualify it for the November 2016 ballot.

“Any effort to gather signatures in California is a gargantuan undertaking and doing it around the busy holiday season presents additional challenges. But as we showed with 2008’s Proposition 8, wide coalitions can work to thwart the liberal agenda,” California Family Alliance research analyst Lori Arnold wrote in a piece circulated this month .

Yet LGBT organizations in California are not waiting to see if their foes succeed in submitting the needed signatures. They have been meeting over the last five months to organize a response well ahead of Election Day next year.

They are prepping to roll out a public education campaign by the end of December aimed at educating voters about the transgender community. The Brown Boi Project, API Equality, Gay-Straight Alliance Network, the National Center for Lesbian Rights, the Los Angeles LGBT Center, and TransLatina Coalition are all part of the organizing committee.

The main groups leading the effort, EQCA and the Transgender Law Center, are hiring dedicated staff to work on the public education efforts.

“One of the things we have learned, and they were aware of,” said Zbur, referring to the Houston LGBT leaders, in a recent interview with the The Pride “is it is really hard to educate people about the challenges transgender people and their families face as well as the talents and gifts the community offers.”

The task is doubly difficult amid a bitter election battle, added Zbur.

“That is why we are very focused here in California on a broad-based education campaign in advance of a ballot measure campaign,” he said. “It is easier to educate people when not in the midst of a high-pitched political election where the other side is able to play off fear and lack of understanding.”

A group of national LGBT funders has contributed $1 million to pay for the education campaign, Zbur said, which will last for up to five months. It will run in various ethnic media outlets, feature transgender people and their families, and include transgender Spanish speakers to serve as spokespeople.

“A key part of that is really featuring transgender people and also helping the public understand their families and the communities that support them,” said Zbur, who added that the campaign would also include speakers of at least one Asian language. “We don’t have enough funding to include all of the various languages that are part of the API community.”

Should the transphobic measure qualify for the ballot, EQCA is working with the American Civil Liberties Union and NCLR on what, if any, legal arguments could be made to spike it before it goes before voters. At this date, it remains to be seen if it will make the 2016 ballot.

“We don’t have a good sense of that,” said Zbur.