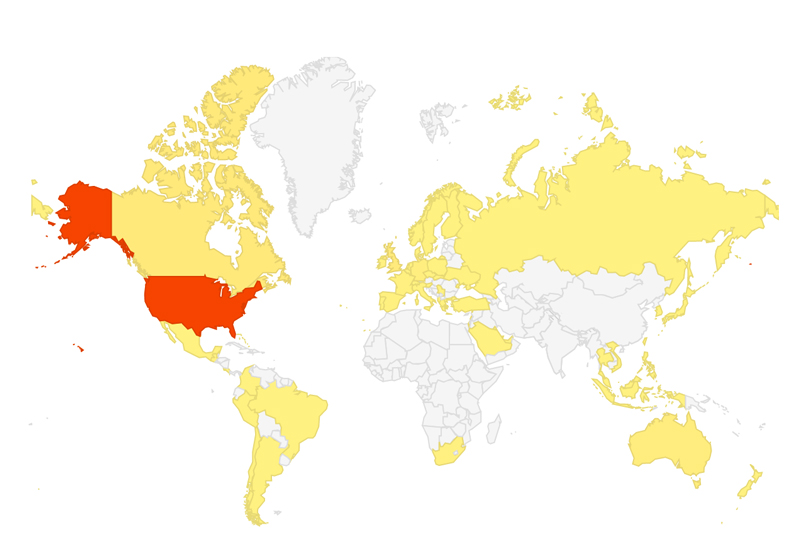 Launching a new newspaper in a city like Los Angeles means you are taking on the world, literally.  But our web results for the first week of our life are just astonishing.  thepridela.com received  more than 45,000 hits and more than 19,000 unique visitors from around the world. But the thing we are most proud of is that nearly 13,000 of the unique visitors came from California.

The world chimed in
The Pride LA had visitors from around the world, of course (it is the world wide web afterall).  Readers from UK, Spain, The Netherlands, Germany, South Africa, Switzerland, Australia and Israel responded most vigorously to Charles Kaiser’s controversial article about the growing Crystal Meth crisis in the gay community.

Some people were outraged and others were inspired in a vigorous debate that played out on Facebook and Twitter.  Kaiser’s article was shared thousands of times and Facebook reports that more than 13,000 comments were attributed to those shares.  News items were also very popular, receiving the bulk of ‘next reads’ for the 60 percent of readers who read second or third articles on The Pride LA.  And a movie studio requested permission to lift text from a movie review.

The local reaction
20,000 copies of the Pride were distributed to hundreds of homes in West Hollywood, dozens of retail businesses along Santa Monica Boulevard from La Brea west to Doheny, dozens of retail locations in Hollywood (including the LGBT Centers), etc.  We received many inquiries about the papers and many well wisher emails and posts in response.

All in all, The Pride LA is a success and we want to thank you for being part of it.  We are thrilled and look forward to our next issue.