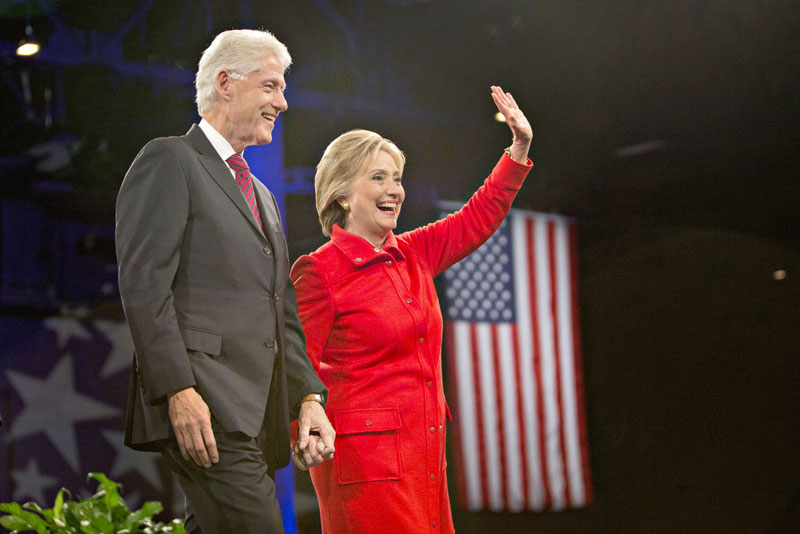 BY TROY MASTERS  |  When the Supreme Court issued its paradigm shifting, 5-4 ruling on gay marriage last June, proclaiming the federal Defense of Marriage Act (DOMA) unconstitutional, the court was undoing President Bill Clinton’s 1996 signature on a bill that barred any federal recognition of same-sex marriages.

From 1996 until 2013 Hillary Clinton stood by her man on the question, as she did on other progressive issues of the day. President Clinton compromised the lives of gay and lesbian service-members when he caved to conservatives by implementing Don’t Ask, Don’t Tell. HIV positive foreign travelers were forbidden entry into United States. It was a hallmark of his presidency to punt where gay rights,  AIDS, abortion rights (“partial birth” abortion), and minority rights (3 strikes) were involved.

As the leading 2016 Democratic presidential candidate, Hillary Clinton seems to think the LGBT community has forgotten — or will at least forgive — precisely how DOMA became law and how artfully (deceitfully, some would say) she and her husband have used it.  Some say, she’s either attempting to revise history or is minimizing.

Both she and Bill suggest DOMA played a strategic role in preventing Republicans from succeeding in a push for a Constitutional amendment that would ban gay marriage forever.

Hillary told MSNBC’s Rachel Maddow:  “On (the) Defense of Marriage, I think what my husband believed — and there was certainly evidence to support it — is that there was enough political momentum to amend the Constitution of the United States of America, and that there had to be some way to stop that.”

Hillary’s rival for the Democratic nomination, Vermont Senator Bernie Sanders who was a congressman from Vermont in 1996 voted against DOMA.  In response to Hillary’s claim on MSNBC Sanders tweeted, “The Defense of Marriage Act was simply homophobic legislation.”

“…the fundamental bedrock principle that [marriage] exists between a man and a woman, going back into the midst of history as one of the founding, foundational institutions of history and humanity and civilization, and that its primary, principal role during those millennia has been the raising and socializing of children for the society into which they are to become adults.”

While there was chattering class talk in 1996 about a Constitutional amendment defining marriage solely as an institution between one man and one woman, there was no formal action that would support Clinton’s claim of momentum.  A Federal Marriage Amendment was later introduced in the United States Congress on 10 different occasions: in 2002, 2003, 2004, 2005, 2006, 2008, and 2013.
Here is President’s Clinton’s statement on the day he signed DOMA, Sept. 20, 1996:

“Throughout my life I have strenuously opposed discrimination of any kind, including discrimination against gay and lesbian Americans. I am signing into law H.R. 3396, a bill relating to same-gender marriage, but it is important to note what this legislation does and does not do.

I have long opposed governmental recognition of same-gender marriages and this legislation is consistent with that position. The Act confirms the right of each state to determine its own policy with respect to same gender marriage and clarifies for purposes of federal law the operative meaning of the terms “marriage” and “spouse”.

This legislation does not reach beyond those two provisions. It has no effect on any current federal, state or local anti-discrimination law and does not constrain the right of Congress or any state or locality to enact anti-discrimination laws. I therefore would take this opportunity to urge Congress to pass the Employment Non-Discrimination Act, an act which would extend employment discrimination protections to gays and lesbians in the workplace. This year the Senate considered this legislation contemporaneously with the Act I sign today and failed to pass it by a single vote. I hope that in its next Session Congress will pass it expeditiously.

I also want to make clear to all that the enactment of this legislation should not, despite the fierce and at times divisive rhetoric surrounding it, be understood to provide an excuse for discrimination, violence or intimidation against any person on the basis of sexual orientation. Discrimination, violence and intimidation for that reason, as well as others, violate the principle of equal protection under the law and have no place in American society.”

In radio ads released the day after that statement in 1996, at a time when President Clinton was seeking reelection, The White House highlighted his support for DOMA in an effort to burnish his conservative credentials. Clinton signed DOMA the moment it landed on his desk because it was politically convenient and because he was on record as being vigorously opposed to same sex marriage.

In several speeches while campaigning to become United States Senator of New York candidate Hillary promised continued support of DOMA, though opposed Constitutional amendment efforts. She maintained her support for DOMA throughout her Senate tenure and as a candidate for the Democratic nomination for president in 2008.

She has repeatedly based her opposition to gay marriages on moral and religious grounds.

The Clinton’s have frequently suggested that DOMA prevented action on harsher measures and that it was a kind of political straw that allowed states to make their own decision on the question.

Both Hillary and Bill Clinton, ever politically expedient, announced their support for gay marriage in 2013, after it was clear that momentum had shifted on the question.

The Clinton’s are consistent.