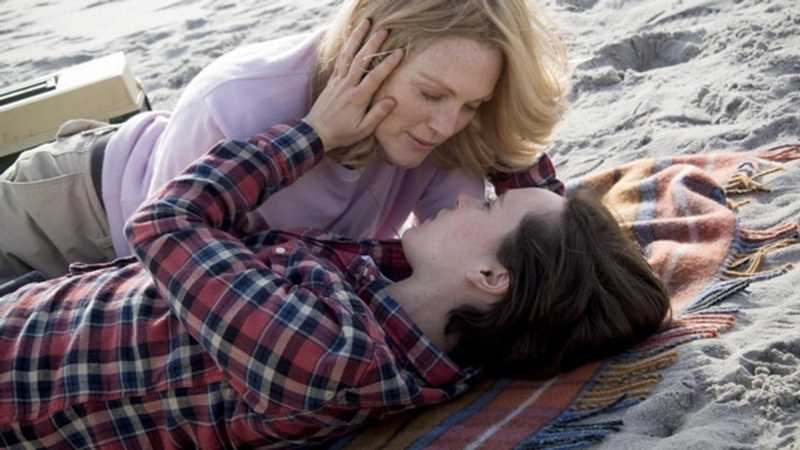 ⚫ BY STEVE WEINSTEIN  By all rights, “Freeheld” should have been the gay movie during the last quarter of the year, when the studios traditionally release the films that are considered the potential award winners.

The film stars Ellen Page, currently the hottest out-LGBT actor in Hollywood, as the domestic partner of Julianne Moore, probably the straight actress with the best LGBT cred, having starred in films like “Far From Heaven,” “The Kids Are Alright” and “A Single Man.” Add to that a screenplay by Ron Nyswaner, nominated for an Oscar for “Philadelphia,” and you have a movie that nearly screams “Hollywood gay royalty.”

Especially having been released hot on the heels of the much-reviled historical film “Stonewall,” “Freeheld” had a lot of good will going for it. Unlike “Stonewall,” it adheres close to the actual events it dramatizes.

Page plays Stacie, a Tom boy grease monkey who falls hard for Laurel, a local cop played by Moore. That Stacie would be willing to put a fight to land the far older Laurel is hardly surprising with Moore in the part. The couple’s transition from loving partners to fierce fighters for equal rights is also understandable; Laurel wants to see Stacie get the same treatment as any other spouse.

Even if you didn’t see the Oscar-winning documentary short based on their story, you may well remember the dying New Jersey cop who tried, unsuccessfully, to obtain the same benefits for her partner that pertained to straight married couples. I certainly do, and I especially remember how the story became a touchstone for those – especially Steve Goodstein, until recently the activist head of New Jersey’s LGBT-rights group Garden State Equality, played here by Steve Carell – who argued that domestic partnerships were no substitute for full-fledged marriage.

That’s why I found “Freeheld” especially disappointing. What should have been an important and potent tribute to those who fought so hard for what we enjoy today becomes, in director Peter Sollett’s hands, a soggy Lifetime Movie of the Week. Sollett, who hadn’t directed a film in several years, reportedly only became attached to the project after Catherine Hardwicke (“Lords of Dogtown,” “Twilight”) dropped out, for reasons that aren’t clear.

What is clear is that Sollett is hardly helped by Nyswander’s overly soppy screenplay. As in “Philadelphia,” Nyswander frames much of the action through a tough-as-nails straight male bystander who becomes emotionally involved in spite of himself in an LGBT couple’s travails. Here, it’s Laurel’s partner on the police force, played with grace and nuance by Michael Shannon. Although it’s Moore who’s getting the advanced Oscar buzz, Shannon’s portrayal of someone limited by upbringing who comes to greater, and sadder, knowledge of the world through circumstance is the film’s reach touchstone.

Unfortunately, as he did in “Philadephia,” Nyswander has chosen to bathe the action in a romantic, gauzy haze that frequently threatens to overwhelm the very hard-nosed action depicted here. When the freeholders (New Jersey’s county commissioners, a term left over from colonial times) of Ocean County, a blue-collar area along the Jersey Shore, deny Laurel’s request, Goldstein springs into action. Along the way, he transforms the two women from couple to cause.

The scenes that show protesters joined eventually by members of the police force can’t help but be stirring (almost in spite of themselves). But they are overshadowed by the film’s first half, which nearly succeeds in showing how two lesbians in a semi-rural county find each other and navigate their coming out to friends, family, co-workers – and, not least – each other.

If the latter half of the film falls flat, blame that blasted Lifetime tendency to milk Laurel’s cancer for every ounce of bathos. But then there’s the touchier issue of Carell’s Goldstein. Regardless of whether it was his or Sollett’s choice to have Goldstein played as a stereotypical loud-mouthed New York-type Jew, the result is more caricature than personality. From my few interactions with Goldstein, I always came with the impression that he was a solid, straight-shooter activist, intelligent, articulate and anything but an in-your-face type.

Even with all of these caveats, I can recommend “Freeheld” to readers without feeling guilty about it. The star quality of the leads aside, this is definitely a Grade A production. Even if they are bathed in bathos, the contrast between the early scenes of Stacie and Laurel and the later ones of Stacie and Laurel in the hospital can’t help but elicit tears.

You may hate yourself for succumbing to Sollett’s manipulative direction. But you’ll be crying just the same – just as you’ll be clenching your fists in rage at the profound injustice of their situation.